b 1954 from Falkland Islands


businessman and councillor, was born in Stanley on 21 August 1954, the son of Thomas Edward Barrett Wallace and Alice Mary Wallace, née Biggs.

Wallace had two brothers, James (Jimmy) Hubert Wallace (1957-1996)) and Fraser Barrett Wallace (1961-2021). Educated in the Falklands schools Wallace started work in 1969 with the Falkland Islands Company as a clerk and has fond memories of the short time he worked with Philip Hutton and John Smith in the 'Works Department' and 'Spares Section'. 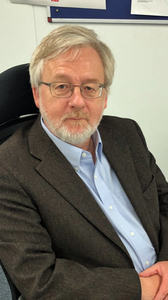 In 1970 he joined the British Antarctic Survey, based in Stanley, as a teleprinter operator and continued to work for BAS until 1974 when Falkland communications, and those with the British bases in Antarctica, were taken over by Cable and Wireless Limited.

In 1972 Wallace took an opportunity to live and study in Buenos Aires for six months. At a time when travel for Falkland Islanders was difficult and expensive he thoroughly enjoyed his time there and made friendships which have survived the tumultuous years since. 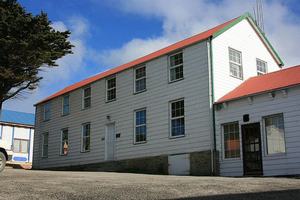 Waverley House - the offices of...

Wallace stayed with Cable and Wireless for some months before taking a passage on the British Antarctic Survey vessel John Biscoe to Southampton. For the next year he travelled around Europe and worked for a time in Israel. After returning to the Falklands in 1975 he rejoined Cable and Wireless as a clerk and stayed with them until 1987, becoming part of the management team. He participated in the rebuilding of the Falklands communications infrastructure following the 1982 war and the major developments in Falklands communications which followed.

On returning to the Falklands in 1975 Wallace became a member of the 'Falkland Islands Committee' and in 1977 he was elected a member of LegCo. A strong critic of the old colonial attitudes and the exploitation that accompanied them, he was at that time said to be the youngest elected politician in the Commonwealth. He has always maintained that this was more a result of a declining Falklands community and so lack of choice for electors than any particular attribute of his. 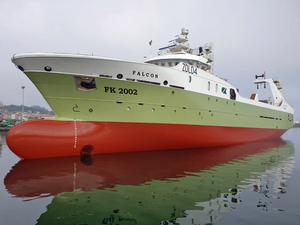 Over the next four years he participated on LegCo, being the first councillor to have regular 'clinics', and also served on ExCo. On two occasions he was part of Falkland delegations sent to meet Minister of State Ted ROWLANDS in South America and with another Falkland councillor Adrian MONK was part of the British team which met with Argentina in 1980. Wallace lost his seat in the elections of 1981.

In 1983 Wallace became a member of the newly established 'Falkland Islands Development Corporation' and served on this board for the next eight years, a time of significant economic and social progress in the Falklands. The Falklands fishery was established in 1986 and created immediate and unprecedented opportunities for Falkland Islanders.

With a colleague from work, John Cheek, Wallace left Cable and Wireless and together they set up one of the first local fishing companies to be entirely owned by Falkland Islanders, Fortuna Limited. After a nerve-racking first few years the company prospered and with a rigorous policy of reinvestment it developed into one of the most economically significant groups of companies in the Islands, with interests in several sectors of the economy and making a major economic contribution to the Falklands' community, an achievement which gave both Cheek and Wallace great pleasure.

The same Stuart who made me welcome during my stay @ Lookout Rocks back in the 80s. Thankyou.