director of civil aviation, was born in Arbroath, Scotland on 17 June 1922, the eldest of eight children.

He went to local schools and when he left school took up an apprenticeship at a local engineering firm.

At the beginning of World War II he joined the RAF and was selected for pilot training and in 1943 as a flying instructor. He was sent to America to be trained and returned for active service; his proudest moment was dropping food for the starving Dutch people in the winter of 1944-5. On VE day Kerr met his future wife Joyce Gustard in a pub in Louth, Lincolnshire. They were married in March 1947. 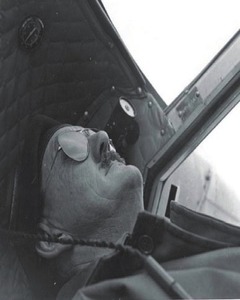 After leaving the RAF, Kerr returned to Arbroath to finish his apprenticeship but then decided to go for his commercial pilot's licence, financing himself by working on the land and wherever he could. At the same time he trained as a civil flying instructor.

He then worked for Airworks Services Ltd, a company teaching the new generation of RAF pilots to fly. During this time the Kerrs had two daughters, Cherry (b1949) and Jane (b1954).

In September 1954, Kerr arrived in the Falkland Islands to take up a three year contract as chief pilot with FIGAS. He first flew on 20 September in Auster seaplane VP FAA. Joyce Kerr and the girls followed in April 1955 and the family lived in Marine House in the heart of Stanley. Kerr had chosen Marine House as he dearly wanted his family to be part of the community. 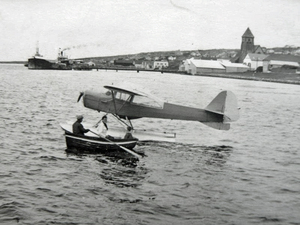 On 18 August 1955, Kerr took Ian CAMPBELL up in the Auster to begin his training as a pilot and on 8 February 1956 awarded Campbell his private pilot's licence enabling him to go to the UK to take his commercial licence.

The Duke of EDINBURGH visited the Falklands in 1957 and Kerr had the honour of flying him around the Islands on 8 January.

In September 1957 Julia, his third daughter, was born, and six weeks later the family returned to the UK on leave knowing that Kerr was to return to the Falklands as the first director of civil aviation, no longer on contract but P & P (permanent and pensionable ). The Kerrs had decided to make the Islands their home. 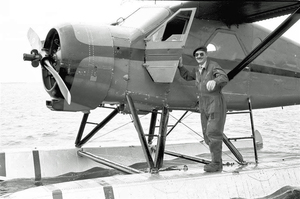 Jim Kerr on the floats of a...

During his many years of flying in the Falklands Kerr turned out (along with Ian Campbell) in all weathers to fly medical flights, look for lost people and deliver vital supplies. He even liked flying the Darwin School kids! The two pilots flew together for 20 years and they were the happiest of Kerr's life.

He valued his friendship with all the inhabitants of the Islands and knew he would be welcomed anywhere, even when he was ill - he once had to stop off at New Island for a few days to recover from 'flu. 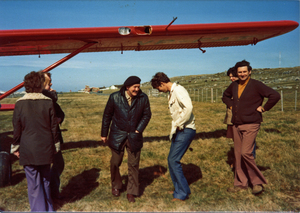 During his 27 years in the Islands Kerr did not take a day's local leave (much to his long suffering wife's chagrin), he just loved his job. Most people knew him by sight because he nearly always wore his trademark navy blue beret, except of course when he was wearing his kilt.

For relaxation he played badminton and was a member of the badminton club for many years, he also refereed football matches and was well known for his intolerance of 'bad' language, on the pitch. He was also a regular in the side bar of the Rose Hotel, sometimes referred to as his second home by Velma MALCOLM.

In 1965 he was awarded the MBE for services to the Islands and its people, to him this was a great honour.

His saddest time was October 1976 when Campbell was killed in a flying accident whilst Kerr was in UK for medical reasons.

In October 1979 the first Islander aircraft arrived in the Islands and Kerr took VP FAY up on its inaugural flight shortly thereafter.

In May 1980 the Kerrs left the Islands and retired to Louth to enjoy the company of his family which included five grandsons and in later years two great-grandsons.

Jim Kerr never forgot his Falklands family. He died in Louth on 30 July 2007.