naval rating and hero, was awarded the Albert Medal (later the George Cross) for an act of heroism in Stanley harbour in 1948.

Lynch was born was born in Wallasey, Cheshire on 6 November 1912. He worked as a shop assistant until he joined the Royal Navy aged 15. He began his career in the Royal Navy in the boys training establishment HMS Ganges in 1928. He served in the cruiser HMS Berwick on the China Station 1930 – 1932 and in the destroyer HMS Diamond, also on the China Station as a Leading Seaman during the Sino-Japanese War 1936 – 1939.

As a petty officer, Lynch served in the destroyer HMS Wallace 1939-1944 escorting North Sea Convoys. While serving in Wallace his ship was involved in a collision with a merchant ship in thick fog in 1942. During attacks by the Luftwaffe, merchant ships used to take evasive action by changing bearing at short intervals. In one such attack Lynch was at the port rail when he saw one of the merchantmen veering towards Wallace on a collision course. In the few seconds available, he dashed to the starboard side and braced himself for the crash. Steam jetted from the destroyer's boiler with the force of impact. The moment that this subsided, Lynch made his way below. He found that one man had been killed outright; the stoker petty officer and two others had been scalded and dazed. Lynch assisted each of the injured men to the foot of the boiler-room ladder and into the hands of helpers. Back on deck, he heard the first lieutenant calling for two volunteers to check the bulkhead and the timber shoring in the vicinity of the point of impact. Lynch went below again and found the damaged section of the bulkhead behind the boiler. He crawled underneath and, calling to a seaman to pass the baulks through to him, jammed these into place. Throughout he was aware that he had no chance of escape from drowning should the hull give way and let in the sea.

Lynch was invested with the British Empire Medal (BEM) for gallantry by King George VI at Buckingham Palace on 16 March 1943.

Lynch served as a Chief Petty Officer in the cruiser HMS Nigeria 1946 – 1951. On the night of 26 February 1948 HMS Nigeria was lying at anchor at Port Stanley. While disembarking from the motor cutter at the port boom, a rating, Leading Seaman Hughes, missed his footing on the Jacob's ladder and fell into the sea. It was dark, and the wind was blowing a fresh gale. The sea was rough, and its temperature was 42 degrees F. Hughes managed to keep hold of the ladder but, as he was dressed in heavy oilskins, he was unable to pull himself up nor could he make for the cutter for fear of the very cold sea and the danger of sinking in his cumbersome clothing. 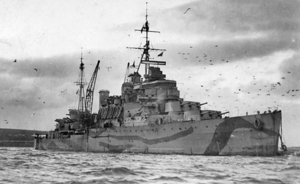 Lynch was sitting in his mess when he heard the call for a lifeboat. He ran up on deck, dressed only in singlet and trousers. Sizing up the situation at once, he made his way along the boom, down the ladder and into the water alongside Hughes. He persuaded Hughes to let go of the ladder and then got an arm around him. At that moment, the seaman lost consciousness, making it impossible for Lynch to do more than support him. One of the ship's motorboats was lowered but, because of the heavy swell, it could get no closer than 20 yards to the two men.Lynch slipped into the sea and, using the swell to help him, swam with the unconscious man to the motorboat. After a struggle the crew managed to haul Hughes into the boat but Lynch, having nothing to hold on to, and determined not to hamper the crew's efforts, had swum back to the side of the ship. Lynch found it impossible to reach the Jacob's ladder against the powerful swell and, seeing that Hughes was now safe, he swam out to the boat a second time and was taken aboard. After a spell in the sick bay, both men recovered. 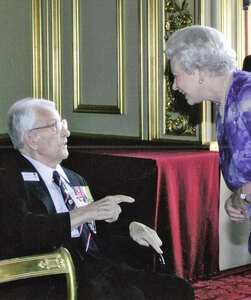 Lynch’s final naval appointments were in HMS Blackcap, RNAS Stretton 1951 and in the Reserve Fleet in HMS Rame Head until he was discharged in September 1953. He worked at the Cadbury’s factory at Bourneville and later for HM Customs and Excise at Heathrow Airport until his retirement in 1976.

Lynch was a founder member of the Albert Medal Association and he was made a Freeman of the Wirral in 1995. He served as welfare officer for the Wallasey branch of the Royal Naval Association. His Albert Medal was stolen while it was on display at Wallasey library, but later it was found and is now in the Imperial War Museum. His George Cross and BEM (Gallantry) are in the possession of his family.

Joseph Lynch married his wife Betty (née Bennett) in 1939, and he died, aged 93 on 11 October 2007. He was survived by his grandchildren – both his wife and son predeceased him.

The date given for Lynch's death in the Guardian obituary is 11 October 2006.