airline pilot, was born in Liverpool on 7 February 1925, the son of William Henry Spencer, a motor racing engineer, and his wife Agnes, née Wilkinson. He was educated at Liverpool Collegiate. He was still at school on the outbreak of World War II, but volunteered for the Fleet Air Arm as soon as he was old enough, having trained briefly as a commercial artist. He served in the Far East where he was shot down and taken prisoner, fortunately just before the Japanese surrender. Spencer left the navy in 1946 with a report from his commanding officer that he was 'a keen and efficient officer, who has done good work instructing in the Aircraft Handling School.' In 1948 he was recruited to establish an air service in the Falkland Islands. 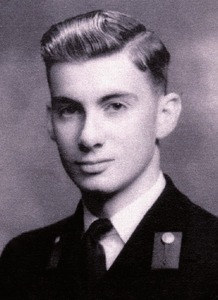 In November 1948 he and an engineer landed from the RRS John Biscoe with two crated ex-army Auster aircraft and the Falkland Islands Government Air Service was born. The planes were assembled and first test flown from Stanley racecourse on 19 December. Islander opinion was sceptical about the project, but on Christmas Eve an emergency call came from North Arm where a six-year-old girl, Sandra Short, was seriously ill with peritonitis and needed hospital treatment. Her father, Archie Short, had carried her into the settlement on horseback, a four-hour ride from their house at Lion Creek. Spencer agreed to pick her up, asking that a landing strip should be marked out with sheepskins and a fire lit to show wind direction. Despite appalling weather, the flight was a success and Sandra's life was saved. Governor CLIFFORD wrote to thank Spencer for his 'ready response to the recent call for help for Sandra Short, despite the fact that it meant alighting on an unprepared ground which you had not previously seen'. The incident was reported in The Times and in 1953 a dramatised version of the event in the form of a radio play called 'The Good Tidings' was broadcast by the BBC.

The idea of an air service had been vindicated. Spencer spent a further four years establishing FIGAS. In 1949 he was awarded a bonus by the Falkland Islands Government 'in recognition of the outstanding diligence and efficiency with which he has carried out his duties in the last year' . In 1950 he converted the service to float-planes, using Austers and a Norseman. When he left in January 1952, the Air Service was a Falklands institution and Government viewed his departure with great regret. A reference written for him refers to the 'far from ideal' flying conditions in the Falklands: 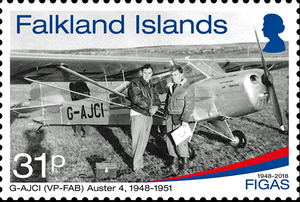 The weather is harsh and high winds are more the rule than the exception. The Government's air service started literally from scratch and Mr. Spencer had constantly to improvise and exercise his considerable ingenuity. The ground organisation was rough and ready and much of the work of this fell to be done by him too. Mr. Spencer's energy, determination and equability of temperament overcame the many difficulties which were encountered....he has had to make his own decisions about flying ...and the soundness of his judgement in these matters is proved by the fact that during his service here he has only had one very trivial accident, when no-one was hurt.

On his departure from the Islands Governor Clifford applied to the Colonial Office for a special gratuity to be paid to Spencer:

for his excellent work...initiating the internal air service.....He has at all times displayed the most commendable care and has given evidence of a judgement remarkable for one so young - he is only 27 now. The popularity which the air service has achieved locally is due almost entirely to the energy and enterprise which he has shown and the confidence which he has rightly inspired. 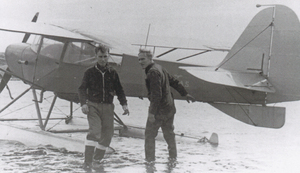 Captain Vic Spencer (on left) and...

Spencer flew for British European Airways for a while, but then transferred to Aden Airways becoming chief pilot and operations manager in 1964. However bush flying became increasingly dangerous as the political situation worsened, and in 1967 he returned to the UK to fly for Britannia Airways. In 1967 he was awarded the MBE for his services to aviation.

Air travel transformed internal communication in the Falkland Islands and to Vic Spencer belongs most of the credit for its successful introduction. He was a true pioneer.