Olympian, was the second son of Louis Augustin BAILLON (1846-1927) of Fox Bay. Louis Charles Baillon is (to date) the only person born in the Falklands to win a gold medal at the Olympic Games. Baillon’s father emigrated to the Falklands in the mid-1800s from Nottingham to become a sheep farmer. 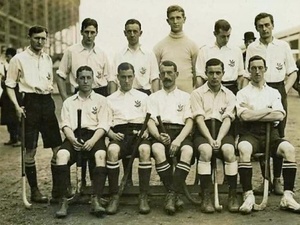 Louis Charles Baillon was born 5 August 1881 at the home of his grandmother, Julia Williams, in Stanley, and was baptised on 30 January 1883 at St Mary’s Church. Baillon returned to England in 1888 and settled in Church Brampton, Northamptonshire.

He soon established himself as a good all-round sportsman, excelling not only at hockey but also at football and he played county tennis. At the 1908 Olympic hockey tournament at the White City, Baillon played as a full-back for the England team, which was one of the four home countries representing Great Britain at the Games.He played in all three of England's games, against France, Scotland and Ireland and he won his Gold medal when the English hockey team beat Ireland in the final by eight goals to one. 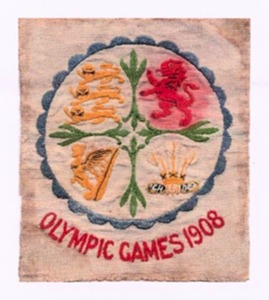 Baillon married Mildred Isobel Green (1881-1949) in 1910, in Bedford. Mildred was, like her husband, an England hockey international.

Louis Charles Baillon joined the Army Service Corps, as a lieutenant, in 1914 and saw service in France before he left the army in 1920. He continued playing hockey during his time in the army and was still playing well into his thirties.

After World War I he got a job as a manager with the Phipps Northampton Brewery Company (the oldest brewery in the UK). He later became a director and then Chairman of the company.

Paul Baillon, serving in the RAF, was killed when his Spitfire was involved in a dogfight with the Luftwaffe over the English Channel on 28 November 1940. He is buried at Bayeux War Cemetery, in the Calvados region of Normandy, France. 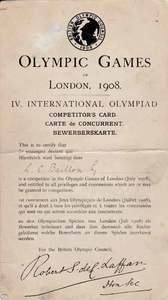 Mark Baillon initially joined the RAF in 1934, but was killed flying from Wick, Scotland, while serving in the Fleet Air Arm, in a Coastal Command Beaufighter over the North Sea on 28 December 1940. Mark Baillon had previously been ‘Mentioned in Despatches,’ and he is commemorated on Panel 4 of the Runnymede Commonwealth War Graves Commission memorial. 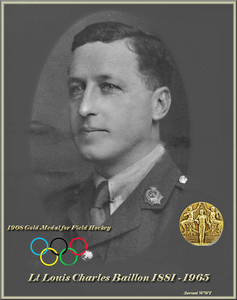 All four sons were also excellent tennis players and they played for Northamptonshire County - and on occasions all five played together.

In 2017 Louis Baillon's sporting memorabilia were purchased by the Friends of the Falkland Islands Museum and Jane Cameron National Archives and donated to the Museum in Stanley;  his Olympic medal having previously been donated to Ratcliffe College, Leicestershire.

(1)  One of Louis Charles Baillon’s brothers (the seventh son of Louis Augustin Baillon) - Major General Joseph Aloysius Baillon CB CBE MC (1895–1951) was a distinguished senior officer who served in both World War winning the Military Cross in 1918. He married, in 1925, Gertrude Emily Fellowes Prynne of Plymouth; they had two sons and one daughter.

(2)  Six teams (England, Ireland, Scotland, Wales, Germany and France) competed for the gold medal for field hockey at the 1908 Olympic Games. This was the first time that field hockey had featured in the Olympic Games. Louis Baillon was a member of the England team that won the Gold medal. Ireland won the silver medal; Wales and Scotland were awarded the bronze medal. One of the notable team members for Scotland was Alastair Denniston CB, CMG, CBE (1881-1961) cryptanalyst and intelligence officer, who was  operational head of the Government Code and Cypher School at Bletchley Park during World War 2.  Denniston chose Bletchley Park as the location of the codebreaking effort, and he  designed the layout of the site. Denniston was responsible for recruiting Alan Turin and Gordon Welchman.