radio operator, was born in Stanley on 11 May 1908 to Richard Atkins and Sarah née Anderson. He was baptised on 16 September 1908 in Christ Church Cathedral. He was the third eldest of two boys and four girls. His great grandparents, Richard and Frances Atkins had arrived in the Falklands in 1858 with the Falkland Island (Garrison) Company. 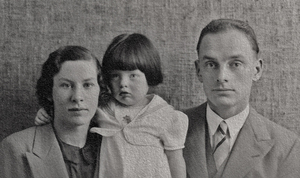 Stan and Iris Atkins, and their...

Stan Atkins and his siblings were raised in the house at 6 Pioneer Row which still stands today. Records show that his grandfather, another Richard (1849-1897), purchased the property in 1879. His early schooling was with the Salesian Sisters and later the government school: arithmetic was his favourite subject.

At fourteen, Atkins had an early morning job as peat boy for the Deanery and on the weekends, when Father MIGONE showed silent movies, Stan turned the projector handle. He also had a cow called ‘Polly White Socks’ which roamed the vacant section next to 6 Pioneer Row, and he supplied the Salesian Sisters with daily milk. 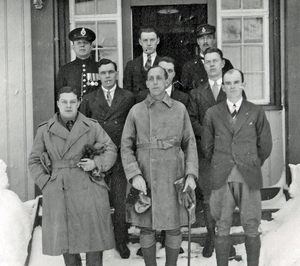 On 11 June 1923 Atkins was appointed post boy and messenger for the Stanley Post Office; then in August 1925 he was appointed engineman caretaker at the South Georgia Wireless Station.

During those early years in South Georgia, he also trained as a wireless operator and in March 1929 was appointed wireless operator, second class. During this period the wireless operators were experimenting with short wave signals over long distances using low frequency to contact Norway on behalf of the whaling stations.

In January 1934 he was advised that arrangements had been made for him to proceed to South Georgia by the SS Lafonia on 31 March. He had met Iris Beatrice Lehen prior to Christmas, 1933, at the church bazaar from which a whirlwind courtship developed. In February 1934 Atkins got approval from the Colonial Secretary to take his ‘wife to be’ with him to South Georgia. 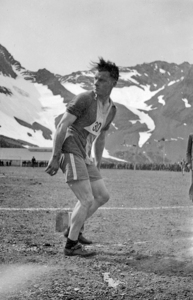 Stan Atkins competing in the summer...

The marriage was set for 26 March 1934; Father Migone insisted on officiating. Within a few days the Atkins were aboard Lafonia heading for South Georgia. Iris never forgot arriving in South Georgia for the first time. Rounding King Edward Point into the bay at Grytviken, she thought she had arrived “in hell” with the Pesca Whaling Station in full operation, lots of dead whales in the bay, flocks of noisy birds, clouds of steam rising from the operation and the smell!

This posting was to last until October 1937. Iris Atkins returned to Stanley in April 1935 for the birth of their daughter Arlene on 21 July. Iris and Arlene returned to South Georgia in November of that year. 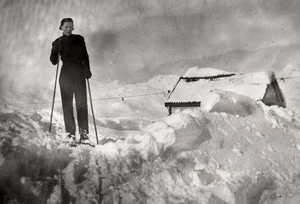 In October 1937 Atkins and his family sailed to the UK where he purchased his first car, a second-hand 1935 Austin 7 Ruby which they used for travelling around the UK and then shipped back to the Falklands. He continued working at Stanley Wireless Station. When British troops arrived in the Islands during World War II, civilian vehicles were to be commandeered for army use. By this time, he had a motorbike as well as the Austin 7, so a plan was hatched: the army got the motorbike and Atkins took the engine out of the Austin 7, boxed it up and took it with him and the family to South Georgia in April 1942. The engine stayed boxed up until they arrived back in Stanley at the end of the war.

The Austin 7 continued to serve the family well until Atkins retired in 1963. When he left the Islands, it still had only done about 20,000 miles.

Living in South Georgia during the war had its moments especially when there was only one other family and reports indicated that the Germans might invade South Georgia. The Atkins decided to evacuate their daughter Arlene, to Stanley to stay with Iris’s sister Agnes Henricksen. In April 1945 they returned to Stanley where they were reunited with Arlene (now ten). The war ended later that year and a bit of normality returned to the Falklands with Atkins continuing to work at the Stanley Wireless Station. 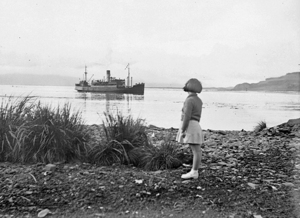 Arlene Atkins at KEP, with RMS ...

His next posting to South Georgia was in March 1949. By then son Michael had been born and the family, less Arlene, sailed on the MV John Biscoe on 7 March. From then until Nov 1950 Atkins was operator in charge, South Georgia.

In 1952 Atkins got approval to build a new home at 6a Pioneer Row, Stanley, on the plot of land next to his parents’ home. With materials in short supply, he had purchased some of the old army huts at Canache at the east end of Stanley Harbour from which he was able to salvage good building materials. Through this recycling process he learnt the art of straightening nails for reuse and for the rest of his life he always had containers of nails and screws which could be reused. The house was completed by the mid-1950s. 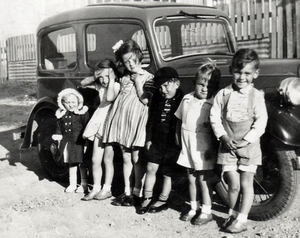 In 1963 after 40 years’ service, the family emigrated to New Zealand.  On 3 July while on-board the RMS Rangitane sailing to New Zealand, Atkins received a telegram advising: “Delighted inform you her Majesty the Queen has approved the award to you of the Imperial Service Medal stop hearty congratulations - Governor” (Falkland Islands). He was to receive his award from the Governor-General of New Zealand, Brigadier Sir Bernard Ferguson on 17 October 1963.

On arriving in Wellington, New Zealand, Atkins’ first job was to complete the building of a two-bedroom flat that formed part of the new home that their daughter Arlene and Ron (Harries) had just completed. Finding that he was still too young to retire he was employed as a storeman for an electronics importer HW Clarke. He completed many more happy years at this employment. 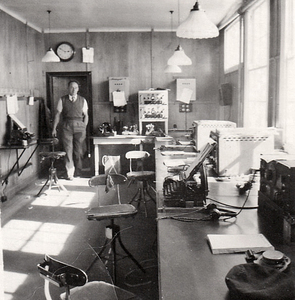 Stan Atkins at VPC - the wireless...

Stan and Iris celebrated 60 years of happy marriage in 1994 with their two children and four grandchildren. With continuing good health, he had no intention of slowing down and regularly walked long distances in his advancing years. When son Michael was building his first home Stan would often appear to put in a day’s work, by this time he was in his early 80’s. He would still pick up bent nails for re-use and he was equally strong nailing with either his left or right arm.

Atkins was a good all-round sportsman, but as he was never in one place for any long periods he tended to be involved in sports on a casual basis. He played football whenever he was back in Stanley and was a good athlete and skier. In the late 1920s and early 1930s he was involved in the sports meetings held in South Georgia mainly skiing events but also running in the summer games.

1931 was his most successful year, winning a number of cups including the Manager (Grytviken) AM Abrahamsen’s Cup in the skiing competition, followed by second prize in the sports event at Leith Harbour. In February 1931, he received a memo from Willie  BARLAS, the magistrate, expressing “His Excellency the Acting Governor’s congratulations on your success and highly creditable effort on upholding British prestige in the recent Sports Meeting held at Leith Harbour”. 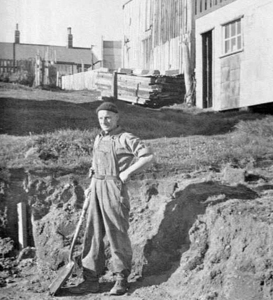 The house that Stan built - digging...

See:  The history of 6A Pioneer Row (in the Jane Cameron National Archives