artist, mother, housewife was born in Manchester, where her father who had been a Unitarian minister was building up Ladybarn School.  This was run along Froebelian lines and was for boys and girls.  Dora, his eldest daughter, had been his chief assistant since 1872.  Theirs was a cultured household, with interests in music, theatre and literature. 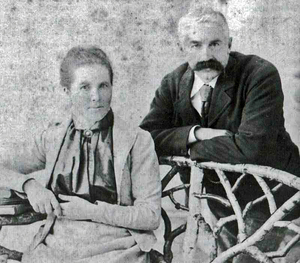 Dora and Robert Blake shortly after...

Dora had met Robert BLAKE previously – their mothers were friends – and when he visited England in 1878 after five years living and working in the Falklands, they became engaged.  Robert returned to the Falklands, expecting to return to England in 1880 when they would be married. Dora, besides her teaching duties, set about learning to cook and do plain sewing, ‘for which she had no natural aptitude’

In the event Robert was unable to return until early 1881, when Dora had given up teaching in order to learn household skills and get some practical nursing experience at the Children’s Clinical Hospital.  She was also on the lookout for a couple to accompany them to the Falklands, the wife to cook and the husband to be gardener and general hand.  A Mr and Mrs Hutton were engaged. 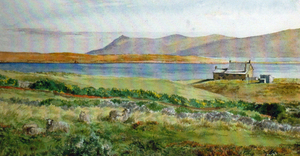 When Robert did return they spent some time planning an entirely new settlement at Hill Cove.  At that time the home settlement was at Shallow Bay, where Blake’s partner Ernest HOLMESTED lived with his family. Dora and Robert were married on 14 July 1881, and after a short honeymoon sailed for the Falklands.

They arrived in Stanley in November where they stayed with Robert’s sister Emily, wife of the Falkland Islands Company manager, Fred COBB.

On the 26November, along with the Huttons, they arrived at Shallow Bay, where they stayed with the Holmesteds.   Robert rode immediately to Hill Cove to unload the schooner there and to give instructions about the building of the small house to which they hoped to move as soon as shearing was finished.  On 9 February Robert, Dora and the Huttons sailed round to Hill Cove on the Petronelle, and the small house was ready, though with few creature comforts.  They immediately began planning the Big House (still standing at Hill Cove today) and building the dry stone foundations.  Gardens were dug in the valley below the house, and the cowshed and stables were set out.  The Border Queen arrived at the end of March with all the supplies needed for this venture. 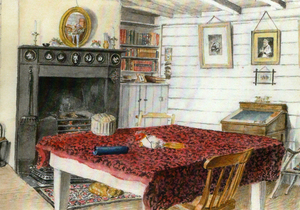 Dora was now in Stanley, where her first child, a daughter Elsie (Elizabeth Fanny) was born on 19 May 1882.  The winter was spent building a woolshed and sheep pens but in October work began again on the Big House, and by autumn 1883 it was fit for habitation and they could at long last unpack large furniture and wedding presents.  A son, Robert, was born in June 1884. 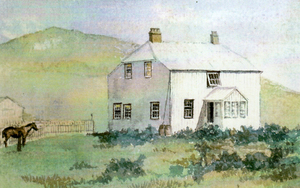 With this large family, it is a wonder there was ever time for the pencil sketches and the lovely watercolours which Dora painted.  Most of these seem to have been sent back to England to family members, perhaps to give a flavour of their lives in the Falklands. 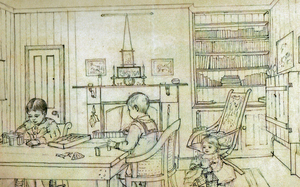 Robert was less concerned about the benefits of an academic education, but he had promised that they would go back, and by now Sydney MILLER was undertaking more management of the farm.

In early 1892 a Miss Firmin was engaged, and she, Dora and the children set sail for England where a rented house was ready for them in Paignton, and it was here that Dorothy was born.  Robert came briefly to England, then went south again, to Patagonia where the new partnership and farm at Estancia Coronel, near San Julian was taking shape.  By the time he returned, Dora with the children and faithful Miss Firmin had moved north to be near Dora’s family in Manchester, renting a house in Parsonage Road near Ladybarn School. Dora’s sister Carrie was now headmistress of Ladybarn – still a difficult person, but good at her job.  The children loved school, especially the woodwork and other handicrafts.  Elsie and Robert excelled at lacrosse.  With all the children at school except Dorothy, Dora was able to resume some of her old pursuits, going to lectures, to the theatre and to Halle concerts.

Robert rejoined the family in February 1894.  He loathed Manchester, and when the lease on the house was up he and Dora took the children back to Paignton.   Because of the heavy investment Robert had made in Estancia Coronel he decided that they could not afford to live in England, so when the two eldest children returned to school, boarding at Ladybarn House, the rest of the family sailed for the Falklands.  They left Stanley at the end of October and upon arriving at Hill Cove moved back in to the Big House, while the Millers decamped to the smaller house that the Blakes had lived in and which had been the Millers’ house when they first came to Hill Cove.  Dora was expecting another baby during all this time, and a son, Arthur, was born at the beginning of May 1895. 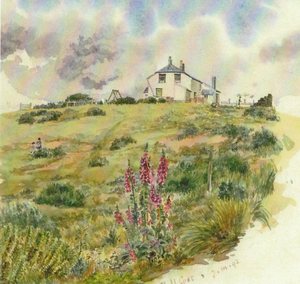 Hill Cove house from the valley ...

Robert, although only 44 was beginning to suffer from the arthritis which was to plague his later years, and he spent a little more time at home with Dora and the children, Elsie and young Robert came home for a long visit in September 1896, and the following month Dora gave birth to her eighth and last child, a son called Norman.  When the Millers returned in December Robert decided to accept a commission from the Falkland Islands Company to “make all necessary reforms in the running of the Company farms before the appointment of a new manager” – a huge task which lasted from February to June 1897 and resulted in the outline of a practical and detailed programme.  He received a generous fee.

Dora was feeling ‘dull and despondent’ at this time and longing to return to England where arrangements had been made to rent a house, Yeabridge, in Somerset from 1898. So it was that they left Hill Cove in March of that year. 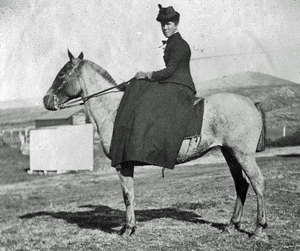 It is not known how often Dora accompanied her husband on his visits to the Falklands and Argentina, however she and her daughter Violet were on board the Oravia with him when the ship was wrecked on the Billy Rock in 1912.

Dora died in 1923, at Mark’s Barn, their home in the village of Merriot, Somerset.