landowner, was born at Port Sussex on 23 October 1873, the second son of John BONNER and Susan Bonner, née Reddy.

He was educated privately at Southport where his parents had retired and enrolled at Liverpool University to study engineering. When the deaths of his elder brother, Harry and his father occurred in quick succession in 1891, he was obliged to leave his studies to go out to the Falklands to run the property at San Carlos. This he did with considerable success for 40 years until his final retirement in 1930. 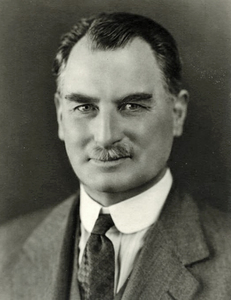 During his time the property was developed considerably, with fencing erected, housing improved and a new woolshed and cookhouse built in 1913 making the property one of the leading stations in the Islands. Livestock were not neglected and George Bonner built a considerable reputation as a judge and promoter of the Kentish Romney Marsh sheep which at that time was the principal breed of sheep in the Islands. He made several importations of stud rams from Kent and from New Zealand to improve the breed.

Bonner married Frances Anne Rigg, at Filey, Yorkshire in 1894. They returned to the Falklands in that year and lived at San Carlos off and on for the next 36 years. She was a keen gardener and it was due to her insistence on having shelter for her plants that the sod wall which still encloses the homestead garden at San Carlos was built. 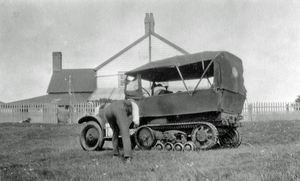 George Bonner retired with his family to England in 1913 and bought a property in Harrogate. The main purpose of the move to England was to educate the family, and the farm was left under the management of his cousin Albert Bonner. George Bonner was in England throughout World War I, and being too old for active service he obtained a position with the Ministry of Munitions as supplier of scrap metal. This involved much travel about the country obtaining scrap for the manufacture of ordnance for the Army. The family was hit by the loss of his younger brother, Singleton, who died of wounds received at the battle of Etaples in 1917. 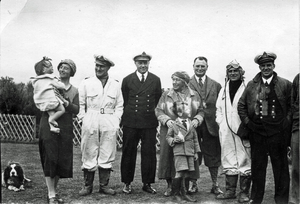 On his return to the Islands in 1919 he embarked on various projects to improve San Carlos. Housing was imported to improve living conditions for his staff, a hydraulic wool press was installed and he was also instrumental in introducing one of the first motor vehicles to the Islands. This was a Citroën-Kegresse half-tracked vehicle which had been developed by the Citroën Car Company of France to cross the Sahara. George imported one of these vehicles complete with driver in the mid 20s. Though not particularly reliable crossing the camp, it performed valuable service pulling a plough in subsequent pasture development round the settlement at San Carlos.

Bonner was a public-spirited man. He was a Justice of the Peace, a cathedral trustee, and served on ExCo from 1924-1930. In 1912 he agreed to make a paddock of land which was owned by San Carlos in the centre of Stanley available for the King Edward VII Memorial Hospital. 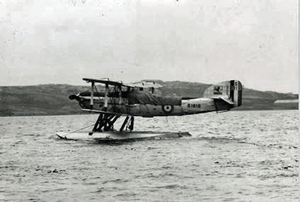 One of HMS Exeter's seaplanes in...

In 1931 he was awarded an OBE in recognition of his services to the colony. But his letters show that he considered his highest honour was representing the colony at the Coronation of King George VI and Queen Elizabeth in May 1937.

He was a genial man, fond of sport, a keen shot and a fisherman. He was also very fond of golf and though taking it up late in life, he became captain of his club in Harrogate. He had laid out a nine-hole course in one of the sheep paddocks behind the woolshed at San Carlos, which was to be the scene of many family games. 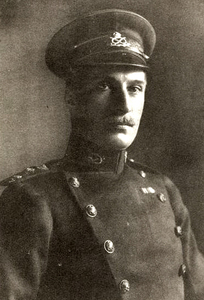 Bonner was devoted to the Falklands, was proud to be an Islander and continually promoted the Islands, their industry and their people. His obituary tells of him being universally liked and a good friend to many.

George Bonner died at Droitwich, Worcestershire, on 13 February 1940, having suffered a stroke some months previously.

George Bonner's younger brother - Singleton Bonner (the third son of John BONNER) - was born at Port Sussex in 1879. He served as lieutenant colonel with the South Staffordshire Regiment but was attached to the Royal Fusiliers during WW1.... He had served in the South African war before gaining 2 medals with 5 clasps..... He was Mentioned in Despatches three times during WW1 and was awarded the DSO after the battle of Festubert (France) in 1915. He then commanded the 1st Staffordshire Regt. He returned to England after being gassed at Loos in the same year.... He then commanded a battalion of Royal Fusiliers and was wounded on April 23 1917 and died from these wounds on May 1st of the same year. He is buried in Etaples military cemetery, Pas de Calais France. (Information courtesy of Stephen Bonner, Falkland Families and Connection website, and The Falkland Islands Museum and National Trust).

See:  For more information about the tracked vehicle Bonner imported into the Falklands

See:  For a description of the first flight to carry mail in the Falklands see: The Penguin 29 November 1934