master mariner and captain of MV Trepassey, was born to Willis and Miriam Burden (née Moores) in 1892, in Carbonear, Newfoundland. He came from a community of tough seamen and skilled ship builders. Burden’s first experience of the sea was as a boy when he accompanied his father on fishing trips to Labrador. After school he went to sea in the sailing vessel Nellie Louise in 1913. During World War I he served as an able seaman in the Royal Navy, seeing action in the North Sea and the Dardanelles. After the end of the war, he joined the Merchant Marine, and navigated wooden schooners all over the world. In 1918, while in command of the SS Prospero he took part in the hazardous rescue efforts of the survivors from the wreck of the passenger liner Florizel – for which he received a Royal Humane Society Medal for Bravery (3rd Class) at Sea for his efforts. Burden was presented with the medal by HRH The Prince of Wales when the Prince visited St. John’s in 1919.  During this period Burden married Annie Nichol, and she accompanied him on many of his voyages. 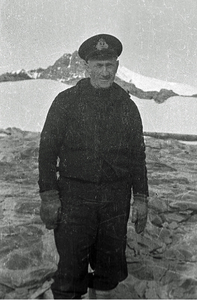 As the use of sailing ships diminished and the demand for ship’s masters declined, Burden came ashore, and he and his wife opened a grocery store in Carbonear. The economic crises of the 1930s forced the couple to sell up and move to St. John’s and Burden returned to the sea as a first officer on cargo ships sailing the length of the east coast of North America. He also served as the navigator on sealing ships - which gave him experience of ice conditions that would later stand him in good stead in Antarctica.

During World War II Burden served with the Royal Canadian Navy - having been commissioned as a Lieutenant Commander. For much of World War II he worked in the harbourmaster's office in St. John’s, Newfoundland, forming up convoys for their perilous dash to England. Burden came from a generation of Newfoundland-born ship’s masters that had an innate ability to navigate their ships through ice waters, and it was probably for this reason that he was appointed by the Falkland Islands Dependencies Survey (FIDS) to be the second of the ship’s masters of MV Trepassey between 1945 and 1947. The first master was Robert Carl SHEPPARD (1897-1954) – also from Newfoundland. Sheppard had previously been the master of the SS Eagle (1944-1945), a Newfoundland sealing ship, which had been leased to support the work of Operation Tabarin. Sheppard was awarded the MBE for his work in the Eagle and Trepassey. 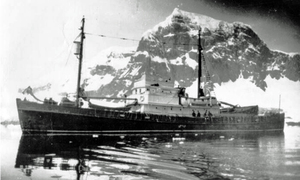 Trepassey (325 tons)was built as a diesel-powered wooden vessel by Clarenville Shipyard at Newfoundland (one of ten such vessels built – commonly known as ‘The Splinter Fleet’) for the Newfoundland Government in 1945; the ship was named after a small fishing village in Newfoundland. Trepassey was leased to FIDS from 1945 until 1949. Trepassey’s task was to replace the SS Eagle - which had proved too unreliable for the work of resupplying the recently established FIDS bases.

During her initial voyage to the Falkland Islands Trepassey carried the second group of husky dogs that were to be used by FIDS, and which were selected in Labrador by Dr Robert SLESSOR, who accompanied the dogs down to the Antarctic.  Another early member of FIDS, Frank Elliot, recalled that ‘Trepassey which was captained by a Captain Burden, a Newfoundlander; they were an all-Newfoundland crew, pretty tough sealers/sailors. The ship had no bilge keels and rolled very badly.’ 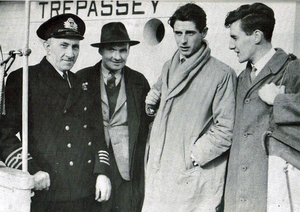 From January 1946 Trepassey, together with Fitzroy and William Scoresby, was engaged on relieving and re-equipping Antarctic bases at Hope Bay, Deception Island and Port Lockroy. She also established a base at Laurie Island, South Orkneys. Perhaps her most important task in 1946 was to establish a base at Marguerite Bay, Stonington Island.

Eugene Burden assumed command of Trepassey in time for the 1947 voyages which spanned the period Jan-April 1947. During his time as ship’s master in Trespassey the ship took a number of scientists south – including (for his first trip) Vivian FUCHS, who later became the Director of FIDS – now the British Antarctic Survey.

Burden's signature on the report of...

While at Stonington Island, on 2 April 1947, Trepassey caught fire due to the overheating of the furnace which supplied warmth to the cabins. Although the Falkland Islands Company ship Fitzroy was able to pump water on board, it was not until four hours later that the flames were got under control. The Governor of the Falkland Islands Sir Miles CLIFFORD was onboard the Fitzroy, at the time, undertaking a tour of the Dependencies. In a typically forthright manner Clifford took charge of the situation and directed the firefighting. An American observer, also onboard the Fitzroy, noted:

‘Governor Clifford directed operations on deck [from the FIC ship Fitzroy] wearing an outfit that was worth the trip. A cloth golf cap, muffler, tan polo coat, overshoes, mittens, and holding a pipe. All that was missing was an umbrella.’

Burden submitted a full report of the incident to the leadership of FIDS. It reveals the seriousness of the situation that he faced - the ship handling skills of Captain Freddie White, the master of the Fitzroy - and the calm and capable actions of Burden and his Newfoundland crew. From the report:

At about midnight on 1st April, I arrived from shore in the last boat, everything was normal on board … I told the Mate that they should all go to bed as they had worked hard all day and I would stay up until the watchman arrived … [Shortly] after 0100 I smelled smoke. I took my flashlight and went first into the galley. I then opened the engine room door, and saw that it was filled with smoke … I got near enough to see that there was a fire on the aft bulkhead … the fumes of the smoke were very strong

I raised the alarm… I entered the engine room again to see how I might best cope with the flames … and how best to fight it … On regaining deck, the second time, most of the crew were there and we got the fire extinguishers … which we used from the aft engine room entrance … [but] they had very little effect on the flame.

I ordered holes to be cut in the deck in the vicinity of the furnace [the heater for the accommodation cabins] … we shouted to the Fitzroy that we were on fire … We poured water through the holes on deck, which had some effect on the flame … As the Fitzroy was getting close, we devoted out time in getting her made fast, and getting her hose. After being made fast, they had little difficulty getting the water to run … we now had about eight holes cut in the deck, which was having a great effect.

At this stage, the Fitzroy touched bottom … she had to move to deeper water … I went below to try and keep the fire under control until the Fitzroy came alongside again … buckets of water were passed down … I kept throwing them onto the flames … until the Fitzroy berthed alongside us again … after berthing a hose was passed down and I played it on the area over the fuel tanks until I considered it out … I felt myself getting a little dizzy and swaying on my feet … I made my way to the ladder and regained the deck and gave my mask to someone else.

The [fire] fighting still went on … everybody that could do anything, which included both crews and the FIDS personnel, all did what they thought best to quench the flame. … through [these] combined efforts at 0820 we felt that the fire was completely out.

I would like to state that but for the promptness with which Captain White had his ship alongside, and the quick handling of the hoses, things would have been different … I feel we did fairly well, and also have saved the cargo.

Trepassey was seriously damaged, but temporary repairs enabled her to return to Stanley for refit. Thereafter she went to Montevideo for dry docking and major repairs, before sailing north back to Newfoundland. Following her service for FIDS, Trepassey returned to Newfoundland and Labrador working in various commercial roles. On 16 July 1964 loaded with explosives and serving an oilrig in the Sable Island area, 100 miles off the coast of Nova Scotia, she caught fire in the engine room; she later exploded. All her crew were rescued.

The leadership of FIDS were keen to continue to retain the skills of Burden, but he declined and returned to Newfoundland and finished his working life teaching navigation at the Newfoundland and Labrador College of Fisheries. He died on 4 October1979, and is buried in Mount Pleasant cemetery, St. John’s.

The Burden Passage: 63°08´S, 56°32´W, running NW-SE between d’Urville Island and Bransfield Island, was charted by FIDS in January 1947 from ‘Trepassey’ on the first navigation of the passage; named after Capt. Eugene Moores Burden

Capt Burden was my great grandfather. Amazing and heart warming to read about some of his adventures. Thank you for writing this.