postmaster, was born at Stanley on 24 July 1888 and was one of eleven children.

Her parents were Charles Carey, an ex-Royal Marine who became chief of police and Ellen Elizabeth, née Rudd. Maude became a pupil teacher at the Government School in Stanley on 2 March 1903 and took up employment as post office clerk on 3 August 1920, rising to first clerk under Mr G L Brown, postmaster. 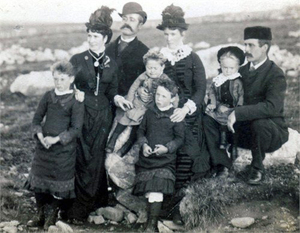 She was appointed to the post of colonial postmaster on 1 January 1934, the first lady postmaster in the British Empire.

She maintained a correspondence with a number of keen collectors of Falkland Islands and Dependency stamps including Dr David Nabarro, Dr Dudley Stone, James Andrews and Captain Bernard S H Grant, and her neat italic handwriting is familiar to collectors to this day.

She went out of her way to provide details of each new issue of stamps, which was very fortunate as the records and much local information were lost in the Town Hall fire in April 1944.

In 1928 there was a shortage of ½d and 2½d stamps in South Georgia and permission was given to surcharge a number of 2d stamps with a locally made hand stamp bearing 2½d. For this provisional issue there was an immediate worldwide demand. 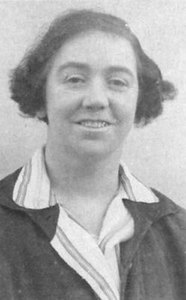 Maude Carey went out of her way to help her friends. To Captain Grant she wrote,

I addressed so many envelopes to you. Unfortunately they arrived with the consignment of stamps, and the issue was withdrawn. As a very great favour he [Nelson-Jones, the South Georgia postmaster] did four for me or rather for four of my stamp friends.

Maude Carey could be forthright in her opinions. She thought little of the first pictorial definitives issued in September 1929 but in early 1932 as acting postmaster she served as a member of the committee formed to plan the coming Centenary celebrations.

It was Maude who proposed a new issue of stamps, which was taken up by a sub-committee chaired by George ROBERTS.

The Centenary commemorative set of 1933 is still widely admired and of all the stamps issued by the Falkland Islands Government is the best-known issue.

Part of a Carey letter reproduced in Major Spafford's book The 1933 Centenary Issue of the Falkland Islands not only gives details of the second printings of the issue that arrived on the ocean liner Reina del Pacifico which is of great interest to specialists, but also refers to the reaction in Argentina

'I believe according to the paper 'La Prensa', [the Argentines] intend surcharging any of our letters which bear the Centenary stamps. They [have] got the impertinence to own the Islands. I've just written to someone there to see what will happen to my envelopes'. 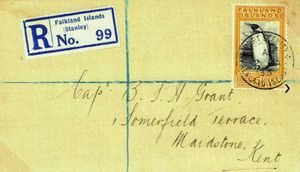 1933 Centenary cover to a philatelist...

The majority of letters addressed to Argentina bearing this issue had their envelopes surcharged and are of particular interest to collectors.

Carey remained a spinster all her life. She was the first woman in the Islands to hold a driving licence. She was awarded the ISO.