last United States consul at Stanley (1898 – 1908), was born on 28 July 1827 at Thompsonville, Connecticut to Irish immigrant parents. At an early age he was put to work in a carpet factory so he was largely educated ‘by reading and by observation’ He retained a thirst for knowledge all his life. Following the bankruptcy of the carpet business, the family with barely $50 to their name, moved to Iowa and young Rowen worked on a farm to support his parents. 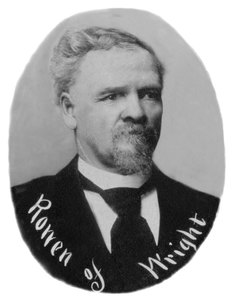 385 US Consul in Stanley and Punta Arenas...

At the age of eighteen Rowen joined the United Brethren and was given a licence to preach. In the following fourteen years it was claimed that Rowen, the ‘boy preacher’ converted 1,400 to Christianity and established twelve churches. His health suffered from his efforts and in 1878 he moved into the insurance industry. He was almost immediately successful. He could have become wealthy had he not been over generous lending money to his fellow men, who did not always repay him.

He showed an early interest in Republican politics as his father had done and was elected to represent Wright County in the Iowa State Senate in November 1893. Despite being belittled by many for introducing a bill for raising the age of consent from thirteen to eighteen, he soon came to the notice of the Republican Congressman Senator Allison. When William McKinley became president in 1897 his supporters were suitably rewarded and in the following year Rowen was offered the position of US Consul in the Falkland Islands on a four year contract. By then he had married Mary Jane (Jennie) Farmer and they had nine children, but he had no hesitation in leaving the country taking just his wife and their youngest and only unmarried daughter Wynnifred. After a lengthy journey via Liverpool and Punta Arenas, they arrived in Stanley on 19 July 1898 and took over from John Miller whose four year contract as US Consul was ending. They moved into the Consul’s house No 1 Hebe Street which was rented from Louis WILLIAMS. 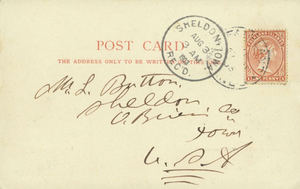 Initially Rowen was kept very busy caring for American interests, quelling three mutinies and successfully defending an American accused of murdering his captain! ‘His defence was his masterpiece. Those who heard his appeal to the jury are not likely to forget it,’ reported the Falkland Islands Magazine. The Rowens made friends easily and kept open house. Wynnifred became a friend of the Felton sisters and caught the eye of Jack FELTON. They were married in April 1901 in the cathedral by Dean Lowther BRANDON with Louis WILLIAMS as best man. Their son Louis Felton was born in June 1902 and there were to be two daughters, Dorothy Iowa Felton who married AG BARTON and Eileen the youngest.

After three years Rowen was offered an extension to his contract at a higher salary, which he accepted and the family did not take any home leave until 1905. In 1908 the United States Government took the decision to close the consulate and offered a similar position at Punta Arenas which after some thought Rowen accepted for a further three years before retirement at the age of seventy four. 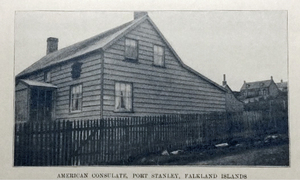 Part of his farewell speech in the presence of Governor ALLARDYCE given at a dance on 27 July 1908 underlines his attractive character:

You people of the Falkland Islands have made Mrs Rowen and myself your guests, and never while memory holds her throne will we forget the kind, the friendly, hospitable treatment which we have received here. Permit me to say that our present memories of the Falkland Islands will be fadeless; when all earthly things are fading from view, will the tender loving memories of the Falklands disappear. This great demonstration with its interblended flags fills our hearts with tender feelings and gratitude; the flags are typical of the kind of work which I have tried to do; that is to cultivate friendly relations, as far as it lay within my power, between our respective countries.

On his retirement he returned to Belmond, Iowa where he died on 1 May 1914. He is buried, among numerous descendants of the Rowen family in Gracelands cemetery at Rowan, Iowa. In the Falkland Islands the Rowen family name is remembered in Rowen House. 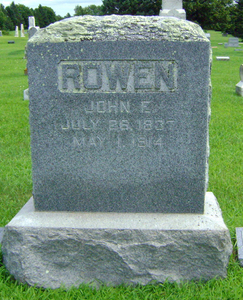