visiting grassland expert, was born in London on 20 March 1899 the son of William and Margaret Davies.

He was educated at the Sloane School London, and at the University College of Aberystwyth and served for six months in the army before returning to university where he gained a first class degree in Agriculture and Botany in 1923. He was later awarded the degrees of MSc and DSc for his research work in grassland science. 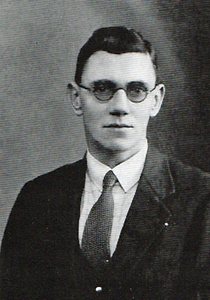 Davies married Alice Lewis (also a botany graduate from the University College of Aberystwyth and always addressed by him as Lal) on 3 November 1928. They had one son, David. On graduation Davies worked in the Welsh Plant Breeding Station at Aberystwyth and in 1929 he was appointed chief research officer for grasslands by the Empire Marketing Board. He departed on his honeymoon in January 1929 for New Zealand and spent five years there and one in Australia.

On 20 November 1937 Davies arrived in the Falklands in the SS Lafonia, at the invitation of Governor HENNIKER HEATON, and with the support of some of the farm managers. He travelled extensively, visiting almost all the farms, making a comprehensive survey of the grasslands of the Falkland Islands and he conducted re-seeding and fertilisation experiments. Davies worked with David Weir the highly capable government stock inspector seconded from the New Zealand Department of Agriculture, for three years. 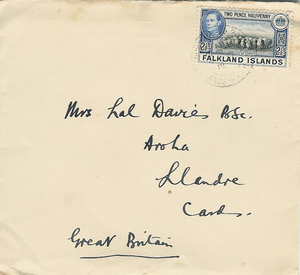 457 Correspondence from Davies when he...

Davies's subsequent report was primarily concerned with the improvement of grassland pasturage, and although it did not contain as much animal husbandry advice as MUNRO's Report of 1924 Davies reiterates many of his conclusions and recommendations.

Davies stated the problem succinctly; the decline in the number of sheep carried and the decline in wool production. There are two key recommendations in the Davies Report:

Davies challenged directly the open range, large scale ranching basis on which the Islands farming industry had been based since its inception. He argued not for overstocking but for large flocks on smaller, subdivided Camps, with frequent movement of sheep to new Camps. 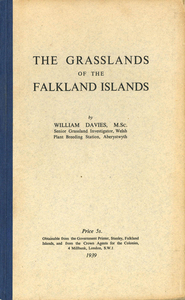 William Davies report on the...

'The time has arrived when the Falklands must consider very seriously whether the present ranching policy is to continue, or whether a complete change of methods involving a policy of grassland improvement together with a more intensive system of pastoral agriculture is to be put into effect. Continuance of the existing ranching system cannot but lead to a still greater lowering of carrying capacity, and to the decreased wealth of the country as a whole. With a change over in methods and the gradual substitution of a more intensive type of grassland farming the decline in production would cease ... sub-division of paddocks, the better management of pastures, and the replacement of the present herbage by better plants are all essentials in the developmental scheme.'

Davies' 'root and branch' criticism of Islands farming initially received a very mixed response - some of it distinctly hostile. Governor Henniker-Heaton made little secret of his support and, with his encouragement, the Department of Agriculture attempted to implement some of Davies' recommendations in a modest way in the vicinity of Stanley, after Davies left the Falkland Islands. 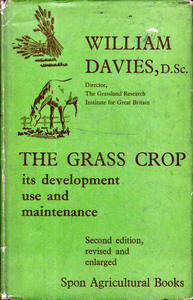 Davies wrote the majority of his Report before he left the Falkland Islands, but the printed version The Grasslands of the Falkland Islands (HMSO 1939) did not reach the Islands until mid-1939. The Report was distributed to all sheep farmers and managers, but the Governor lamented that 'it received no acknowledgement from any of the large [land] holders'.

Davies gave a public lecture in the Old Town Hall on 5 March 1938 and left Stanley in SS Fitzroy on 12 March 1938 for Punta Arenas. He then began a tour of farms in Chile and Argentina, and submitted a report on both countries to the British government. 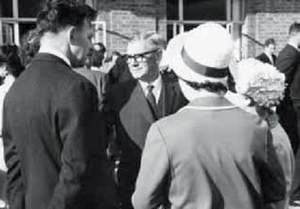 On his return to the UK Davies resumed work on his monumental survey of all the grasslands of England and Wales - the first time that such a large-scale survey had been attempted.

He was deputy director of the new Grassland Improvement Station at Dodwell Farm, Stratford-on-Avon, and became director in 1945. Grassland research was transferred to a new Institute at Hurley, in Berkshire, in 1949, and Davies remained as director until his retirement in 1966.

He was created a CBE in 1964. He dedicated his life completely to research and he worked tirelessly for international cooperation in his field. Davies always felt at home in the company of farmers, and believed that rigorous scientific research must have practical application to work on the land. His knowledge of world grasslands was unrivalled.

The Grasslands of the Falkland Islands by William Davies 1939.pdf

William Davies; ' The grass crop: its development, use and maintenance'; pub. Spon; 1952