colonial secretary, was born in Castletown, Isle of Man on 10 November 1860, the son of Edward John Dickson and his wife Lucy Mwlrea, née Quayle. He was educated at King William College in the Isle of Man. During the Boer War, he was a captain in Field Intelligence and awarded the DSO. From 1903-1909, he was adviser on native affairs to the government of the Orange River Colony. Dickson was posted to the Gilbert and Ellice Islands as resident commissioner in September 1909. He was not a success in this post: administrative incompetence, financial ineptitude and the embarrassment caused when he supported the native Banabans against the Pacific Phosphate Company, led the Secretary of State to express his grave displeasure. 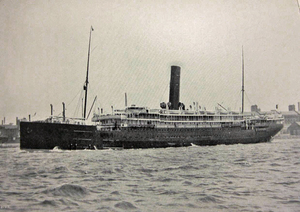 RMS Orcoma - which brought the...

Dickson was next sent to the Falkland Islands as colonial secretary in 1913 and he arrived on the RMS Orcoma on 25 August. From that month to April 1914, he administered the government during the leave of Governor ALLARDYCE. Dickson arrived with bumptious confidence and announced that he intended to reform the machinery of government. He then left for Buenos Aires and South Georgia without making adequate arrangements for a stand-in. On his return he proposed to sack several senior officials: Montague CRAIGIE-HALKETT, WA Thompson the colonial treasurer and E B BINNIE the magistrate in South Georgia. When Allardyce returned he was not amused: Dickson was sent home on 10 June and his services were terminated by the Colonial Office in September 1914. During World War I, he was commandant of a prisoner of war camp in the Isle of Man. His pension was still being paid in 1944.