Chilean governor and brigadier, was born in Valparaiso in 1840. He was of foreign origin, being French on his father's side. On leaving school he entered the military academy, from which he graduated in 1860 with the rank of second lieutenant in the artillery. In his professional career he was outstanding for his extensive knowledge of languages and mathematics, which allowed him to translate artillery manuals in English and French for use by the military. In 1866, he took part in the war against Spain. He was a teacher of English, geometry, astronomy and world history in the secondary school of Valparaiso. He became adjutant of the military academy, reaching the rank of regimental major in the marine artillery regiment. 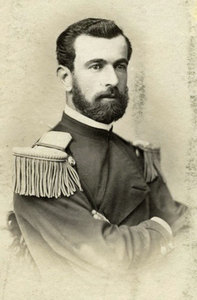 In 1874, he was appointed governor of the colony of Magellanes in Punta Arenas. In this post he distinguished himself by his concern for development, and particularly for European immigration. Having learned of the successful introduction of sheep into the Falkland Islands, he became interested in the possibility of doing the same in the steppe-like fields of southern Patagonia and Tierra del Fuego, until then virgin. So in December 1876, he travelled to Stanley in the corvette Chacabuco of the Chilean Navy to visit and establish relations with the government of the Falkland Islands. After Almeida's ten day visit, Governor CALLAGHAN reported to London:

As Sandy Point {Punta Arenas} is likely before long to become a thriving settlement it would be greatly to our advantage to have steam communication between it and this port, it would open up a good market for our sheep, cattle and other products for which we can get in exchange flour, coal and wood - articles much needed here. I may observe in conclusion that if the foregoing enterprizes prove successful the progress of this Colony may be regarded as assured.

Many of these hopes were to be disappointed, but the appointment of FE COBB as honorary consul for Chile in June 1877 was almost certainly agreed during this visit.

In Stanley Duble Almeida had acquired a consignment of 300 sheep which he took back with him to Punta Arenas. These were later sold to the British immigrant Henry Reynard for a breeding experiment, on Isabel Island in the Strait of Magellan. From this successful experiment, in 1877, came the introduction of sheep into the territory for breeding on a large scale. In a short while, sheep became the economic base for the later development and progress of the southern region of America.

The marked severity with which Duble Almeida carried out his duties as governor provoked resentment among the people and in November 1877 there was a mutiny by the naval gunners in the garrison. Sadly, this unfortunate event led to loss of life and damage to both public and private property. Seen in a poor light and humiliated, he resigned his position at the beginning of 1878. A year later when Chile declared war on Peru and Bolivia, he took part in various actions and operations of that war (the War of the Pacific), which lasted until 1884. His brilliant wartime conduct culminated in him becoming political and military head of the city of Puno in Peru. Later he assumed command of the military garrison of Santiago de Chile, and, already a colonel, the command of the marine battalion and coastal artillery of Valparaiso. In 1891, he was in Europe on a commission to buy arms for the Army when the revolution against the government of Jose Manuel Balmaceda suddenly broke out. As a result of this he was retired from the army. He rejoined the army later, and was promoted to the rank of brigadier. He died in Santiago on 10 April 1921.

May 2019 Photograph added
May 2019 Corrections to text