Spanish admiral and senator, was born in Palos de Moguer (Huelva) on 23 December 1816. He began his career as a coast guard in Cadiz in 1833. After qualifying as an officer, he took part in various naval actions in Spanish waters and elsewhere. His distinguished conduct earned him first promotion to sub-lieutenant, then the award of the Cross of San Fernando and then the rank of captain of marines. In 1842, he was promoted to lieutenant-commander, and in 1843 to commander, at the same time becoming a colonel of marines. In 1847 he became a brigadier in the marines. In 1850, he was promoted to captain, in 1851 to commodore, in 1868 to rear-admiral and in 1881 he became an admiral. 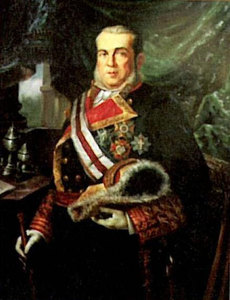 In 1862 he was given overall command of the Spanish Scientific Expedition to the Pacific. This was intended to improve relations with the former Spanish colonies in South America and to re-establish the scientific work undertaken by Spain in the eighteenth century and thus integrate the kingdom into similar work which other European nations were undertaking at that time. The squadron comprised the frigates Resolucion, Nuestra Senora del Triunfo and the schooner Virgen de Covadonga and a considerable group of professionals in different scientific specialities and techniques were embarked. Their work should have allowed a major advance in the knowledge of natural history and science and brought credit to the Spanish expedition.

The first part of the voyage took place in Atlantic waters and in the Strait of Magellan, where hostile weather caused the admiral to send the two frigates back to the Falkland Islands. They arrived in Stanley on 28 February 1863 and Governor MACKENZIE paid a formal call on Triunfo (although the captain was out). The ships remained in Stanley harbour for six weeks and the expedition's naturalists took the opportunity to collect samples of the Islands' flora and fauna with help from the American sea captain William SMYLEY. The chaplain, Charles BULL, showed them his personal collection of plants and specimens. The expedition's photographer, Rafael de Castro y Ordonez took three views of Stanley from the Triunfo moored in the harbour: they are probably the first photographs ever taken in the colony. He recorded his - none too favourable - impressions of the Islands: 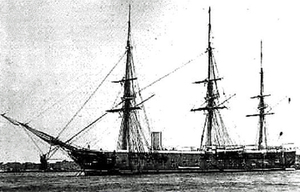 The land is in a sad condition: it has around 300 habitants, 30 Catholics and the rest Protestants... The vegetation is scarce, the ground is formed by something like peat which is burnt in the stoves as lumps and gives off a good heat. Amazing resources left providentially in such an extremely cold and unpleasant country.

The frigates left Stanley on 11 April and Governor MACKENZIE reported to London:

I have afforded these two vessels every assistance in my power in executing some necessary repairs before proceeding to sea and it gives me great pleasure to inform [the Secretary of State] of the friendly spirit evinced by the Spanish Admiral who, although I previously informed him that I was unable to return a salute, fired the usual number of Guns to our Flag. 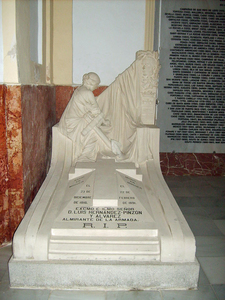 Pinzon's grave in the  Pantheon...

Pinzon's ships sailed round the Horn to rejoin the rest of the expedition at Valparaiso. The next phase was carried out along the Pacific coast particularly in Chilean and Peruvian territory. Unfortunately Pinzon was not up the standard demanded by the importance and responsibility of his position. His intemperate character contributed to the failure of his mission and led to unpleasant incidents throughout the long voyage. Among these, and without doubt the worst, were the incidents that occurred during their stay in Peruvian waters and culminated in his occupation of the Chinchas Islands. This outrage to Peruvian sovereignty led to the absurd war between that country, Chile and Spain. That ill-fated event earned the unanimous condemnation of the peoples of America, and gave rise to such animosity against the Spanish Scientific Expedition that it had to return to Europe rapidly.

On reaching the highest naval rank, Luis Hernandez Pinzon was made a senator of the kingdom, and received other honours and distinctions. He died in 1891 in the same city as he was born. Some years after his death, the Spanish Government had his remains transferred to the San Fernando Pantheon of Famous Mariners at Seville.