farmer and entrepreneur, was born in Basingstoke, Hants in 1866, son of Philip Hobbs and Elizabeth Mary, née Holmested.

He emigrated to the Falkland Islands as a young man to work as an apprentice on the farm of his uncle Ernest HOLMESTED at Shallow Bay, West Falkland.

In about 1882 he moved to Punta Arenas, as did other Islanders. Here he remained for the rest of his life, becoming a man of high standing in the community, known for his business undertakings and personal qualities. 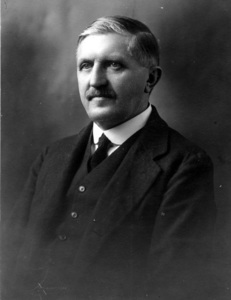 In Punta Arenas he struck up a friendship with the German, Rodolfo Stubenrauch, who was managing the business interests of the local branch of the firm Wehrhahn Hermanos y Cía of Valparaíso, and simultaneously acting as British vice-consul in Magallanes.

Both men grew to be great friends, as well as becoming brothers-in-law, as in 1895 Hobbs married Sara María Teresa Bloom (born 1869 in Punta Arenas).

Ernest Hobbs and Sara had seven daughters and three sons.

In 1883, Wehrhahn Hnos y Cía obtained the first land concession in Tierra del Fuego, 123,000 hectares on the west coast of Isla Grande. There they established the Estancia Gente Grande, given over to sheep farming with stock brought over from the Falkland Islands. Subsequently Stubenrauch and Hobbs became partners in the enterprise, which led in 1904 to the formation of Sociedad Ganadera Gente Grande, in which they were the major investors. 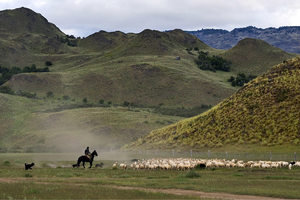 Hobbs was appointed manager, a position he held for many years.

The Estancia Gente Grande was one of the most important sheep-rearing establishments in Magallanes, running flocks numbering 100,000 head. Towards 1914, the Sociedad acquired the right to rent Isla Dawson, in the Strait of Magellan, where another large sheep estancia was established, together with a sawmill and dockyard.

Hobbs himself invested in the Sociedad Ballenera de Magallanes, (Whaling Company of Magallanes) of which he was elected president in 1911, and also in other industrial, commercial and farming enterprises. Among these was the business of Hobbs y Cía, in which he was joined by Mauricio Braun, Francisco Campos and others. This company obtained an important concession to rent land in the Territorio de Aysén, in southern central Chilean Patagonia, which led to the founding of the large Estancia Valle Chacabuco. 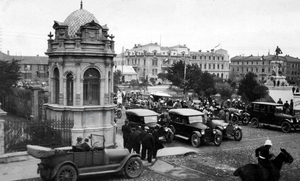 Hobbs' personal qualities as a cultivated, benevolent and educated man, together with his willingness to serve in the community, led to his appointment as the first alcalde (or honorary mayor) of Punta Arenas by the provincial government of Magallanes, a post he held from 1919 to 1925 to general approval.

He was also actively engaged in the British community in organisations like the British Association of Magallanes, the Anglican Society and other groups, in which his outstanding contribution to the public good is well remembered. 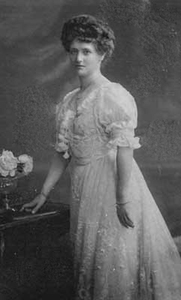 Ernest Hobbs was my Great Grandfather, my grandmother being his daughter Sylvia Elizabeth. She met my Grandfather John Bowering when he was British Consul for the Magallenes based in Punta Arenas 1927-30, subsequently moving to Antofagasta where my Father was born.

Any information that you have regarding, Ernest, sylvia and/or John Bowering from their time in the region would be greatly appreciated.