British naval officer, was born in Woolwich in 1745 or 1746. According to the inscription on his headstone, he first went to sea at the age of ten, taking part in Admiral Lord Hawke's decisive defeat of the French fleet under Admiral Conflans in Quiberon Bay on 20 November 1759. He passed for lieutenant on 14 February 1769, but while awaiting an appointment as a lieutenant, Edgar obtained a passing certificate as a master of a fifth rate from Trinity House on 13 January 1776. This enabled him to join the Discovery as her master on 22 February 1776, serving in her for the whole of COOK's third voyage, during which he was responsible for numerous surveys. Edgar was finally promoted to lieutenant in 30 July 1781. On 6 September 1785 he applied for twelve months leave to command a ship in the merchant service employed in the southern whale fishery. Later that year, on half pay, he sailed for the 'Brazils' as master of the Hope on a whaling and sealing operation which took him to the Falkland Islands. This enabled him to survey West Falkland Island in 1786-7, his survey being published by Aaron Arrowsmith in 1797 with a further edition in 1831. In Falkland Sound, Edgar substituted the name Port Edgar for what had been Port Albemarle on BYRON's survey and Port Albemarle for Port Stephens, moving the latter to its present position west of Cape Meredith. Hope Harbour between Hope Point, the north-west tip of West Falkland and Westpoint Island, is clearly named after Edgar's ship, but Hope Point is a later addition. A note on the chart indicates that in 1786 the Hope ran aground on one of the Jason Islands. 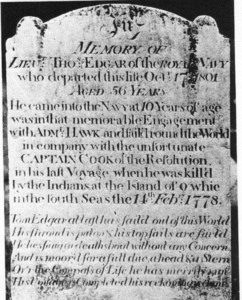 In 1789, Edgar was appointed naval agent on board the transport Lady Juliana, Captain Aitken, carrying over 200 female convicts to New South Wales. As a result she has been dubbed the floating brothel. During the voyage Edgar was described as a 'kind and humane man', borne out by the fact that only five convicts died on the voyage. He returned to England in the Dutch snow* Waaksamheyd, carrying plants from Governor Phillip for Sir Joseph Banks. In 1794, while serving in the Gorgon, Captain James Wallis, he was reported to be 'a good sailor and navigator, or rather had been, for he drank very hard, so as to entirely ruin his constitution'. From November 1795 until his death on 17 October 1801 Edgar was in charge of Dungeness Signal Tower on Romney Marsh. He is buried in the churchyard of All Saints, Lydd, Kent on the north side of the church. The inscription on his headstone, which, in 1995, was only partly decipherable, is taken from a photograph taken in 1903.

He came into the Navy at 10 Years of age

was in that memorable Engagement

with ADML HAWK and sail'd round the World

in company with the unfortunate

CAPTAIN COOK of the Resolution,

in his last Voyage when he was kill'd

by the Indians at the Island of Owhie

Tom Edgar at last has sail'd out of this World

His shroud is put on & his topsails are furl'd

He lies snug in deaths boat without any Concern

And is moor'd for a full due ahead & a Stern

Or'r the Compass of Life he has merrily run

His Voyage is Completed his reckoning is done. 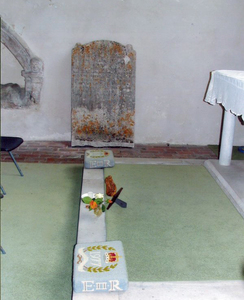 Unfortunately in 2000 the headstone was broken and replaced by a new one giving just his name, date of death and the fact that the old headstone had been removed to the North Chapel.