colonial chaplain, was born at Hammersmith, London, the son of William Faulkner - 'the son of a clergyman', he later wrote, 'by whom I was educated'.

He graduated from Trinity College, Cambridge in 1844 and was ordained deacon in September of that year and priest eight months later. After a curacy at Stroud (Glos), he was appointed on the recommendation of the Bishop of London to the chaplaincy of the English congregation in Buenos Aires, arriving there in July 1847. When the Rev James Leith MOODY left Stanley on leave in 1853, he engaged Faulkner as acting colonial chaplain. 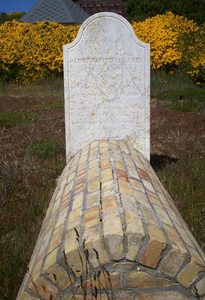 Faulkner arrived early in 1854 and a year later when it was clear Moody would not return, he applied for the post, backed by some florid testimonials from his flock in Buenos Aires and by Governor RENNIE, whose son he had been tutoring. The Colonial Office agreed he should take the post.

He died of apoplexy in Stanley on 28 March 1859 and was succeeded by the Rev Charles BULL.