colonial surgeon, became a member of the Royal College of Surgeons in February 1835, and practised in Walsall, Warwickshire. One night when the Whig grandee Lord Stanley was passing through Walsall, his seven year old son and heir was taken ill and Hamblin was sent for. The treatment was so successful that Hamblin felt able, in 1842, to remind Stanley, then secretary of state for the colonies, of his debt - it may be that Hamblin felt it healthy to leave Walsall after a planned duel with a local solicitor had been interrupted by the police. 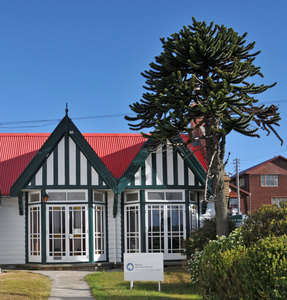 In November 1842 Stanley saw little prospect of offering Hamblin a job, but Governor MOODY's request for a doctor in the tiny colony of Port Louis was received shortly thereafter, and in April 1843, Hamblin was offered the post of colonial surgeon in the Islands at a salary of £300 pa. He arrived in Port Louis on 23 November 1843 in the schooner Columbian Packet, accompanied by his wife, Elizabeth Hamblin, née Longden, his two children (Louisa Jane and FH) plus his mother-in-law, Louisa Longden and her son James LONGDEN who was about to begin a long successful career in colonial administration.

Hamblin had to spend the first three months in the colony in a tent, but he had bought a plot for £50 in the new settlement of Stanley (named after his patron) and erected one of the first private houses in the town: it still stands - Stanley Cottage. Governor Moody, a bachelor with Government House only half built, moved in with the family and clearly relished home comforts. He appointed Hamblin his aide-de-camp and later appointed him to ExCo. Moody's intimacy with the Hamblins aroused the jealousy of the surveyor, Murrell Robinson ROBINSON and provoked an incident in the government offices in March 1845 (see entry for Robinson). Commander SULIVAN, who was in port at the time, noted dryly: 'The wife of the doctor is a clever rather nice person and I believe she is at the bottom of it all for the doctor himself is one of the last men that would suit the Govr. He has neither ability nor intelligence enough to do so'. 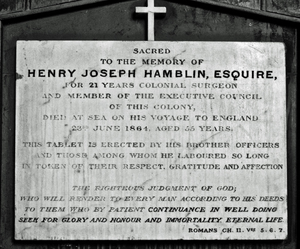 Hamblin's closeness to Moody meant that most of his appeals for extra fees, for inspecting ships' companies and similar tasks, were turned down by the Colonial Office, who suspected the governor of special pleading. Apart from occasional accidents, the Falklands had a healthy climate, although Hamblin's patients increased with the arrival of the military pensioners and other immigrants. His own health suffered and he took fifteen months sick leave in 1852-3. An appeal to be transferred to another colony was rejected and he returned to the Islands in the Chester on 2 December 1853.

His health continued to decline: a particularly gruelling incident followed the wreck of the barque Cubana in 1862, where Hamblin performed seven amputations on four survivors. In 1863 he applied for premature pensioned retirement. Governor MACKENZIE wrote in his support: 'this gentleman has earned the good opinion of successive governors under whom he has served, for his efficient and assiduous discharge of his duties while his kindness and professional skill have obtained the gratitude and confidence of the entire community.' In the event his health failed and he sailed for home without approval from London.

Hamblin died at sea on 23 June 1864. His wife pleaded, unsuccessfully, for a government pension.

A memorial in Stanley Cathedral to commemorate his work was rescued from the original church, demolished after the peat slip of 1886. A stamp in the 1995 foundation of Stanley series, designed by James Peck, is dedicated to Hamblin: his portrait is necessarily vague as no pictures of him survive.