surveyor and engineer was born in Southwark on 20 August, son of Macleod Robinson ('Gentleman') and his wife Anna Maria Sophia (presumably née Robinson). He worked with the Ordnance Survey in 1837-8 and as a surveyor in Kent in 1839 and 1840 before going into practice with one Carrington. 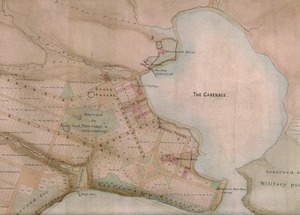 Robinson joined Lieutenant-Governor Richard Clement MOODY's party which sailed for the Falkland Islands in October 1841 on board the Hebe and arrived in Port Louis on 15 January 1842. Moody later wrote that Robinson was the nephew of his former tutor - certainly he was the Governor's only social equal in the official group during their first years at Port Louis, and Moody appointed him his private secretary. Robinson surveyed Port Louis to a scale of 90 yards: 1 inch, and then produced a fine plan (now in the National Archives at Kew) for the settlement's development as the new town of Anson around a central diamond with a grid pattern of roads. Because of the move to Stanley, this plan was never carried through.

In January 1843 Moody sent him to Carmen on the Río Negro in Patagonia to secure horses and experienced gauchos for the colony. Robinson returned in March with 36 horses and two Indian gauchos and wrote a long report on the state of the Río Negro, which was forwarded to the Colonial Office in July. Robinson found the coastal settlements falling into decay though he was impressed by the horsemanship of their inhabitants and the quality of some of their livestock. He had carried out an important solo mission competently and in July, following some trouble with 'foreigners', Moody appointed him a Justice of the Peace, 'in case of any misfortune happening to myself'. Robinson surveyed Stanley prior to the transfer of the settlement in 1845 and then took a party to survey potential agricultural areas around Stanley and north of Choiseul Sound. 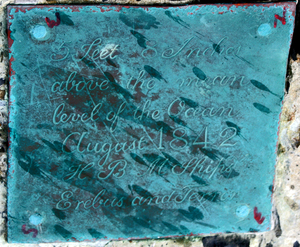 The arrival of Dr HAMBLIN and his family in November 1843 changed the balance of personalities in the tiny community. Robinson was replaced as private secretary and clearly felt he was being excluded from his close relationship with the governor. In March 1845 he returned without permission from the rigours of surveying in Camp to be told that he was no longer needed as a JP. A furious row took place in Government House during which Robinson rejected Moody's reproofs and accused him of having called the doctor's wife a whore. This was too much: Moody sent him home advising him to set out 'axe in hand' for some other colony.

When Robinson reached London around September 1845 he was received with some sympathy at the Colonial Office and was appointed second assistant surveyor general at the Cape Colony, travelling to Capetown in 1846. He spent thirty years in South Africa, progressing upwards to first assistant surveyor, deputy civil engineer and deputy surveyor general for the Eastern Cape, deputy civil engineer for Cape Colony and in 1865 chief engineer of roads, bridges and buildings. During the 1850s he was primarily employed in surveying land taken from a Xhosa tribe on the eastern border of Cape Colony. He produced an ambitious design for Queenstown with a hexagonal place at its centre, perhaps with memories of Anson. During his later years Robinson supervised road-building across the Little Karroo Range into the interior of the Colony.

In 1850, he married Mary Anne Ebden, the daughter of John Bardwell Ebden, one of the earliest British settlers in the Cape. They had two daughters, Lucy Marianne (b1855) and Ethel Laura (b1860). Robinson was elected associate of the Institution of Civil Engineers (London) in 1861, and member in 1870. He retired in 1876 and returned to London. He died at his house in Philbeach Gardens SW on 25 January 1900, leaving an estate of £993 to his two - still unmarried - daughters.

Joseph Dalton HOOKER described Robinson as 'a most obliging little fellow' and he seems to have won the affection of many who met him. He clearly was an effective surveyor and blossomed as an engineer in the broad acres of the Cape. In the tiny society of 1840s Stanley though, he was too young, too impetuous, too vain (Moody would say) and too jealous of his close relationship with the governor to avoid a ruinous scene which made his position impossible.

The Murrell River near Stanley is named after him, as is Robinson Pass north of Mossel Bay in South Africa.