zoo keeper and collector, was French, supposedly a sailor, who was discovered working with animals at a pleasure garden in London and recruited for the London Zoo as a keeper. The Council of the Zoological Society of London resolved at its annual meeting of 1866 to despatch Lecomte to capture a variety of birds and animals from the Falkland Islands to add to the Zoo's collection - and in particular to replace their existing example of a male Southern Sea Lion. 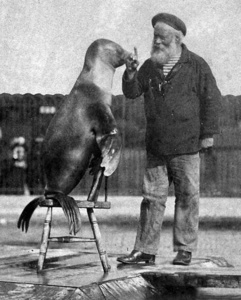 Lecomte left Swansea on 1 June 1867, in the coal-ship Epsilon and arrived at Stanley on 11 August 1867. The first fortnight after his arrival he devoted to the vicinity of Stanley, but found little of interest. In September, Lecomte went to Captain PACKE's establishment at Island Harbour, and stayed there a month, searching the creeks and shores diligently in that vicinity. In December he returned to Stanley, where Governor ROBINSON gave him a room in Government House and allowed him the use of a schooner to make several voyages to Volunteer Lagoon and the shores of East Falkland. Lecomte succeeded in collecting a variety of penguins, but did not find any sea lions until March when he collected four at the Kelp Islands off the coast of Lafonia. But these died in Stanley, for lack of suitable small fishes to eat, and on 23 May Lecomte set out again in Captain HANSEN's schooner Felix and succeeded in capturing a further four sea lions.

These four sea lions, with two warrahs, were the only mammals among the assortment of 83 animals which left Stanley for Montevideo with Lecomte on the schooner Foam. But the seas were stormy and 71 of the animals died before reaching Uruguay. On the mail boat to England three of the four sea lions died for lack of fish (supplies had been thrown overboard after a passenger had died of yellow fever) and Lecomte could only present the surviving female and one warrah, plus six birds to the Zoo on 24 August 1868. These were meagre results for an expedition which had cost almost £560, but the Council of the Zoo declared themselves satisfied with Lecomte's conduct during a difficult and dangerous expedition.

The Warrah survived at London Zoo for three years and the female Sea Lion did not die until 26 March 1884. As for Lecomte, he died in London on 20 December 1876; his is one of only three homo sapiens deaths recorded in the Zoo's log-book known as Daily Occurrences. Several photographs taken around 1870 of Lecomte with a female sea lion and with a grey seal survive.