stipendiary magistrate, was christened in Wimbledon, Surrey on 25 August 1802 the son of a lawyer and legal reformer, Basil Montagu, and his second wife Laura, née Rush. His mother died when he was young. His father was a friend of many of the Romantic poets and enjoyed a successful career in the law. On 10 November 1817 he was admitted a member of Gray's Inn and on 1 January 1826 was called to the bar. He was appointed attorney general of Van Diemen's Land {Tasmania} on 18 November 1828 and conducted prosecutions with skill and fairness so that his elevation to the bench of the Supreme Court in 1833 was popular. But he lived at the limit of his means, irritated the governor Sir John Franklin and was attacked by the press as the 'mad judge'. He was sued for a debt and when he ruled that a local dog tax was invalid the governor took the opportunity to remove him from office in 1847. Back in England in 1848 he appealed to the Privy Council - unsuccessfully - in a case that became celebrated. 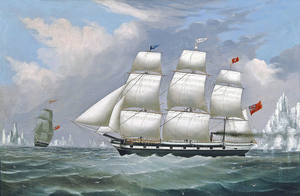 The Colonial Office were obviously aware of all this and a minute of 1851 noted: 'Mr Montagu was dismissed from a much higher situation in VDL for unjustifiable conduct after a long course of [illegible] and obstructive behaviour towards the local government'. None the less he was appointed stipendiary magistrate for the Falkland Islands on 14 January 1850 and arrived in Stanley with his wife Maria Ann, née Adams and family on the Barque Diana on 2 July. The post of coroner was added to his responsibilities in February 1851. He sided with LAFONE's manager Richard WILLIAMS in a dispute with Governor RENNIE in 1851, to the irritation of the latter and of the Colonial Office. A letter from an Islander to Archbishop Cullen of Dublin noted that the stipendiary magistrate Montagu 'is a Catholic and he is very anxious to have a priest here'.

In June 1854, he resigned his post leaving his wife running a small school in Stanley, until she returned to England in 1857. In February 1855, Montagu moved to Sierra Leone as registrar of the deeds, becoming acting chief justice in May 1856 and registrar general in 1857. He published a collection of the Ordinances of Sierra Leone in 1857, and later produced similar volumes for the Gold Coast {Ghana} and Lagos. His private life in Freetown was lurid with a creole mistress and at least two illegitimate children. Montagu returned to London in 1880 and died of apoplexy there on 22 June. His wife had died in 1872.

The Hobart Town Courier published a sympathetic valedictory on the departing Montagu in 1848:

He moved in an eccentric orbit; and if he terrified by those motions, he occasionally delighted us by the brilliant light which he cast around his path. Fresh, vigorous and original, his intellect always commanded respect and not unfrequently admiration.

It was promise that remained unfulfilled.