farming manager, was appointed by Samuel LAFONE in 1846 to manage his interests in the Falkland Islands, following the signature of the agreement with government for the sale of Lafonia. Two schooners, Vigilante and Paloma, brought Williams and his party from Montevideo to the Islands, arriving on 22 November 1846. Government made some supplies available to him in January and in May 1847 Governor MOODY appointed him to LegCo and made him a Justice of the Peace. But irritation soon crept into their relations as Moody complained that Williams was not supplying the meat to government and shipping which he was contracted to deliver. Williams also dismissed his workforce when times were slack, leaving them to beg subsistence and a passage home from government. In June 1848 Moody reluctantly granted him two additional 'stations' north of the Darwin isthmus in place of the four Williams had demanded. 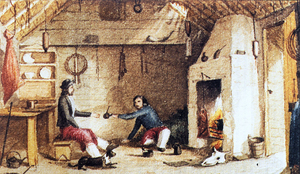 Falklands gauchos having mate at Hope...

Matters did not improve when Governor RENNIE took over in July 1848. In 1851 the Governor reported that on his return from Montevideo in October 1850, Williams boasted that he would act as he liked regarding SF LAFONE's contract and was resolved that government should exercise no control over him. Williams had landed 80 Spaniards and Indians from Montevideo directly at Lafone's stations in Camp, infringing the Aliens Act; he had refused to move a wrecked cutter which was blocking the new slipway; and he had asked the governor for the loan of a few hundred pounds in order to buy goods from a wrecked French ship. Rennie also criticised Samuel Lafone's failure to visit his estates and the dominance which Williams/Lafone enjoyed over other businesses. But Rennie denied that he had ever called Williams a 'sneaking contemptible scoundrel'.

The census of 1851 gives Williams' age as 32 and shows him accompanied by a wife and five children, one of them adopted. In July of 1852, JP DALE arrived to replace Williams,  having been appointed by the board of the newly-formed Falkland Islands Company Limited which took over Lafone's interests in the Islands.  In November 1852 a note in the Hope Place account book shows the sum of  seventeen shillings and four pence as 'Received from Mr.Williams. Cash in hand on giving possession to Mr.DALE'. So it seems as if there was a handover period of some four months, after which Williams drops out of Falklands history. He was followed by a final blast from Rennie to the Colonial Office. Williams, said the governor, was one who would: 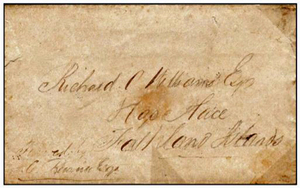 Letter from William Lafone to Richard...

Degrade a British colony to the barbarism of the provinces of the River Plate and to have the few British subjects swamped by importation of disorderly vagabonds, Indians and Spaniards - thrown on the Government whenever it was inconvenient to employ them, to restrict as far as it lay in his power the diet of all the English subjects as well as aliens to bull beef and biscuit; in short to make the Falkland Islands one enormous cattle farm for the exclusive benefit of his employer and cause its inhabitants to live from hand to mouth on the truck system in turf huts scarcely fit for pig sties, whilst he habitually violates the laws and ordinances of the colony.

Friction between governors and managers of the FIC was to become endemic during much of the colony's history. Williams was clearly rougher and tougher than most managers, but he at least got the operation up and running.