government postmaster and customs officer, accountant and consular agent, was born on 21 December 1891 at Stanley the ninth child of Police Constable Lawrence Newing (1850-1933) and Bessie Newing née Eatherton (Hetherton) (1858-1934). He was baptised on 24 January 1892 in Christ Church Cathedral.

Newing was appointed customs officer at South Georgia on 1 October 1913 with an annual salary of £150 and quarters at King Edward Point. His was the first customs appointment made at this location, in response to the large volume of shipping traffic which was being generated by the eight whaling companies working from the Island. This also coincided with Grytviken harbour being made an official port of entry from 1 October 1912 and the provisions of the Tariff & Customs Ordinances which from 1 April 1912 levied an export duty of 3 pence on every barrel of oil. He started work under the stipendiary magistrate, initially James Innes WILSON and from 1914 Edward Beveridge BINNIE. 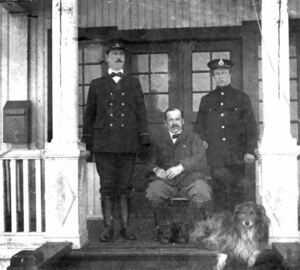 Newing resigned from government service about October 1916 to become an office clerk for the Estate Louis Williams, which ran the Globe Store and Globe Hotel in Stanley. Louis WILLIAMS had died in 1913, and it appears Newing’s selection was instigated by Louis’ wife Ada who had taken responsibility for the business. His appointment was a great success, and when Ernesto ROWE (1896-1975) became general manager of the business in 1923, Newing was appointed the company’s accountant. In November 1924 he became the French Consular Agent in Stanley. 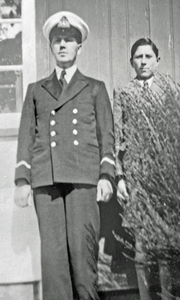 Albert Newing with his son - John...

Albert and Dorothy Newing had two children. Their first child and only daughter Cora Agnes (1922-2018) married in 1944 Captain Adrian Edward TOASE DSC, who had served with distinction as a Royal Marine 2nd Lieutenant on the cruiser HMS Exeter during the Battle of the River Plate in 1939.

Their other child, John (Jack) Charles Newing (1926-2003) was for some time employed by the Falkland Islands Dependencies Survey as a radio operator and meteorologist and over-wintered at South Georgia in 1951.  Following his marriage to Dorothy Mary Newing née Davies (1924-2112) at Christ Church Cathedral on 25 April 1957 they departed in 1958 to search for and relocate to a farm in west Wales. 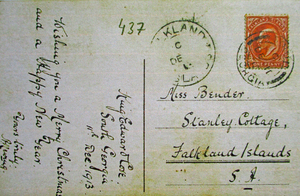 Postcard from Albert Newing to Miss ...

Albert Newing was a sociable individual and became very much involved in the social life of Stanley. In June 1928 he was one of a number appointed to form a committee to arrange entertainments for the visits of Royal Naval vessels in June 1928, February, July and August 1929.

Newing served as Peoples’ Warden on the Church Council of Christ Church Cathedral.

Newing continued his work with Estate Louis Williams until his retirement. He was fully committed to the business and despite some physical debilitation which restricted him to a wheelchair, he was delivered to work by a people carrier every morning.

Editorial comment: The only daughter of Albert and Dorothy Newing - Cora Agnes Newing, was born in 1922 in Stanley,   Cora and Aiden TOASE were married by Special Licence on 30 December 1944, at Ashill parish church, near Swaffham, by Aidan’s father, one week after Aiden returned home on leave from the Royal Marines. After leaving the Falklands in 1943 (to join the WRNS - Royal Marine section) Cora Toase never saw her parents again.