businessman and character, was born in Rosario, in the Province of Santa Fe, Argentina,  on 11 January 1896, the eldest of four children of Richard Lawson Rowe, originally from South Shields and his wife Maud Minnie, née Stant. 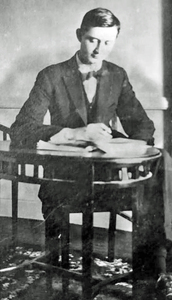 He came to the Falklands in 1923, as auditor-in-charge of the business known as Estate Louis Williams, principally consisting of the Globe Store and the Globe Hotel. These had been founded by Charles Williams in the nineteenth century and passed to his son Louis WILLIAMS who had died in 1913 leaving no heir. Since Louis' death the business had been under the control of his widow, Ada, who had appointed a local manager in Stanley before returning to Britain, the country of her birth, in 1915. After five years it became clear that all was not well with the business and Ada Williams travelled back to the Falklands with her sister Grace Bossingham, to investigate the problem. Rowe later wrote an account of his recruitment:

She appealed to her late husband's connections in Punta Arenas for guidance and assistance and the elder of her nephews, Carlos Curze Williams, with whom I had been friendly for about a year (he was a Chilean Barrister) sounded me on the subject of going to Port Stanley to investigate and make a report ... I being at the moment at a loose end ... and about to return to where I really belong, Buenos Aires ...When I later met Mrs.Williams I was pleasantly surprised. We were both guests at her nephew's flat in Punta Arenas and Mrs.Williams had an air of distinction ... I was given instructions from the family as to what I had to report on ... and Mrs.Williams and I travelled on a cargo vessel of the Pacific Steam Navigation Co. Ltd. to Port Stanley ... I made my report and ... agreed ... to take over the management of the business. 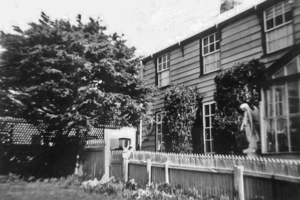 Rowe travelled back with Mrs Williams, on the ship MV La Paz from Punta Arenas and they arrived in Stanley on 28 May 1923. He was now effectively general manager of Estate Louis Williams and adapted to life in the Falklands, while cultivating the eccentricities of style for which he became widely known.

He was a founder member of the Colony Club in 1933 and the 'Suggestions' book is filled with peppery remarks signed 'EGR': 'I suggest that the peat recently available for the bar and billiard room fires is very, very poor and that it is absolutely necessary that better fires be kept up in both these rooms'. 'Where are the copies of Whittaker's Almanac?' 'Suggest that members before election should be vetted as to whether they have been instructed in the simple art of wiping their boots on the mats provided for this purpose'. 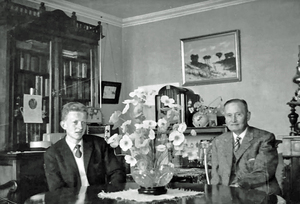 Ernesto Rowe with his nephew,...

Rowe held very strong opinions on political matters, both international and domestic, and although he was never a member of LegCo or ExCo he frequently used the local newspaper to broadcast his views on the questions of the day. These usually appeared under the heading 'Globe Store' in the advertisement section of the paper.

The outbreak of World War II prompted a reflection on history:

The Germanic Tribes of the Baltic Seas stretching across to the Black Forest have again decided to break out, this time under the urge of a voluble nobody called Hitler. This is nothing new ... in the 3rd century as Goths ... they defeated the Roman Empire ... as Vandals they invaded Italy at least twice...150 years ago ... they robbed and dismembered Poland. They have now started again at their old game, War and PLUNDER, disregarding the march of civilization ... The world is utterly tired of Germanic bounce and with the British Empire and their ally France at the spear-head of our civilization there can be no doubts as to the result. 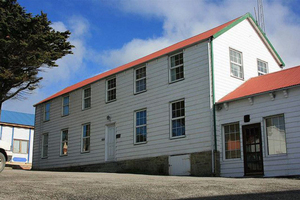 The end of the war heralded a return to domestic preoccupations and in 1945 the following announcement appeared in the Weekly News:

Prior to the outbreak of War in 1939 we had the following 'permanent' advertisement in the Weekly News which we now bring to the notice of our customers and friends in the hope that it may some day bear fruit: 'We are of the opinion, in common with many other people and entities in the Falkland Islands, that the lack of roads in the Colony is a crying disgrace. This expression of our honest opinion on this subject will be permanently advertised in this journal until such time as the building of country roads is resumed'. [Signed]: Estate Louis Williams.

In 1948 Mrs Ada Williams and Miss Grace Bossingham, with whom Rowe had shared Waverley House, the old Williams family home in Stanley, left the Falklands to return to England. Both women died in 1950, Grace in May and Ada in October. By the terms of Ada Williams' will, of which Rowe was the sole executor, Rowe inherited 50% of the Estate Louis Williams property 'for his long service and kindness to me'. The remainder was to revert to him on the deaths of Mrs Williams' surviving siblings. In addition she specified that 'the business of Estate Louis Williams...shall never pass outside the full control of Mr. Rowe'. By 1970, after the deaths of the remaining two Bossingham sisters and a brother, Rowe owned the whole of the Falkland Islands property. 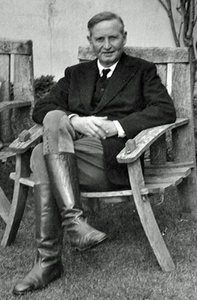 EGR - a peppery character taking his...

He maintained Waverley as a bachelor establishment, with a series of housekeepers, cooks and maids to carry out the domestic duties. However he enjoyed ceremonially dispensing hospitality and as well as occasionally having friends to stay, would host rather formal gatherings. He entertained with some magnificence. Where other people put silver sixpences in their Christmas puddings, Mr Rowe substituted gold sovereigns.

Waverley House at that time had something of the atmosphere of an Edwardian gentleman's club, with heavy fabrics muffling the drafts and the flames of well-stoked fires reflected in highly-polished mahogany, gleaming decanters and brass fenders. Rowe was fond of listening to the gramophone and particularly enjoyed records in the English music-hall tradition, such as the comic monologues of Stanley Holloway. Although he spent much time in arranging his house and garden to his liking, Rowe was also something of a traveller. He took great pleasure in exploring the ports on the itinerary of the Royal Mail Line ships on the long voyage to England. One of his favourite pastimes in later life was to await the arrival of the mail ship in one of these regular ports of call, such as Lisbon or Las Palmas, and suddenly appear on the quayside to surprise acquaintances from the Falklands travelling on leave. Regardless of any arrangements they might already have made for their few hours ashore, he would sweep them away to where he had a car and driver waiting, announcing that he had organised 'luncheon' at a restaurant he liked and that he would show them the best views first. Such displays of somewhat tyrannical kindness characterised many of his dealings with his fellow human beings. He was prone to sudden acts of generosity, but his irascible nature often left the recipients nervous. 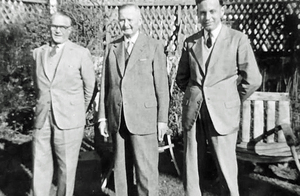 Ernesto Rowe (centre) with his...

William DAVIES, the world renowned grasslands expert visited the Falklands in 1937 in order to write a report on the improvement of pasture in the Falklands. One of Davies' recommendations was the use of various types of clover. Such plants would require pollinators and Davies further recommended that honey bees should be introduced into the islands. Bees and hives were imported and installed in Government House, Teal Inlet, Port Howard and Hill Cove.  Having met Davies during his visit, Ernesto Rowe was not to be outdone and he imported bees and a beehive in January 1941 from Montevideo and installed them in the garden of Waverley House.

Ernesto Rowe's later life in Stanley is described in a wonderful character sketch by John Smith, published in the Falkland Islands Journal of 1998.

In addition to his business activities on behalf of Estate Louis Williams, Rowe was also vice-consul for Uruguay, a position he took which he took most seriously, citing 'my official Exequatur signed by his late Majesty King George VI and by the then Foreign Minister the late Rt. Hon. Ernest Bevin, dated 28th August 1950'.  Ernesto Rowe was also appointed Hon. Consul for Chile in 1937, and he served in this capacity for a number of years.

Rowe remained active in business until his death in Stanley on 22 December 1975.

Ernesto was buried in Stanley Cemetery on Christmas Eve. He left the property of Estate Louis Williams to his nephew Charles Rowe of Buenos Aires. However the Globe Store was burnt down in 1982 by Argentine troops and other estate buildings in Stanley were badly damaged in the aftermath of the Conflict. The remaining assets of the company, including Waverley House, were sold to Fortuna Ltd in 1988.

Editorial comment:  A family member has commented: 'Thank God we have the image of E.G.Rowe who will be remembered as a good and generous merchant, certainly exotic in character, perhaps fit for the Victorian era, but a real Gentleman and a pioneer of his times. I understand he was the first to import a truck to the Islands  as also the first motorcar, even before H.E the Governor and so for some time he would insist that that N° 1 licence plate was rightfully his.' (Comment: Sadly Ernesto was mistaken, because the first motorised vehicle in the Falklands was brought in by George BONNER at San Carlos)