engineer, was born on 5 April 1889 at Landport in Portsmouth, the son of a master baker.

During the first months of World War I he was marine engineer on a collier taking fuel to the British fleet stationed in the Pacific.

On arrival at the Panama Canal his ship was diverted to the Falkland Islands because a British fleet (commanded by Vice Admiral Doveton STURDEE) had been sent to the South Atlantic after the German victory at the Battle of Coronel. Charles Peters’ ship unloaded its cargo of coal just before the Battle of the Falklands began on 8 December. 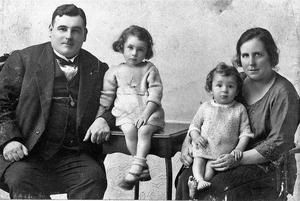 Six weeks after their marriage the Peters sailed for the Falkland Islands on the RMS Oronsa. This was a brave journey for the bride in wartime, when her father had already survived three sinkings. (The RMS Oronsa herself was sunk near Liverpool, later in the war). 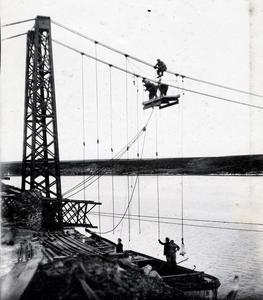 On arrival in the Falklands, Peters became chief engineer on the FIC owned SS Falkland. On completion of his first contract with the FIC the Peters family returned briefly to England.

They came back to the Falklands in 1923 when Charles Peters signed another contract upon his appointment as chief engineer of the FIC. His primary task was the oversight of the repair of ships at Stanley. His son remembers that his father would also repair ‘everything from primus stoves to motor bikes.’

Peters supervised the construction of Bodie Creek bridge and the erection of the shearing sheds at Goose Green, but he was often called back to Stanley to supervise work on ships.

Work began on the bridge on 14 October 1924 and was completed by 10 July 1925. Peters did not slavishly follow the plans and drawings supplied by the FIC – he made a number of personal innovations, among them a stone access bridge which he designed and built on the south side of the Bodie Creek bridge’s main structure. 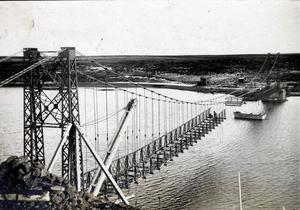 In order to speed up the work on the bridge and giant shearing shed, the Peters family moved to Goose Green for the duration of the building work. While there, Peters rigged sails on the rail trucks which ran from the shearing sheds to the jetty.

Peters was a keen photographer and he owned several high quality cameras. The construction of Bodie Creek Bridge and of the shearing sheds at Goose Green was carefully recorded in a series of excellent photographs. 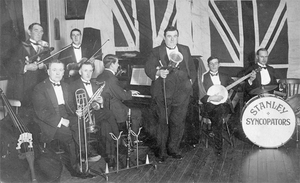 He became very friendly with many of the Norwegian whaling ships crews. Peters and a friend commisioned the construction of a large ‘pram’ dinghy from Norway which was delivered by the whalers the following whaling season. The small boat was used for many family expeditions; they ventured all around the coastline of the Islands even sailing as far as the sea stack called the Horse Block, off Weddel Island, in West Falkland.

Charles Peters loved jazz and was a good musician. He played a Stroh (mechanically amplified) violin and joined a group called ‘The Stanley Syncopators’. In company with many other members of the Falkland Islands community, Peters took part in Governor HODSON’s memorable production of The Downfall of Zacariah Fee.

The Peters returned to England in 1929 because they did not want their children educated at the British school in Uruguay.

The family settled in Slough and Peters joined a structural engineering company. The company closed at the outbreak of World War II, and Charles Peters became an aeronautical engineering inspector.

After being widowed Meggie Peters, who was a trained seamstress, supported herself by her sewing making everything from wedding dresses to curtains and slip covers.

(1) Charles Peters was a keen and expert amateur photographer. He took many of the photographs that exist of the building of Bodie Creek Bridge and also of the building Goose Green shearing sheds. His grandson (Stephen Peters) writes: ‘I never met my Granddad. He died in 1946, several years before I was born, after a long battle against kidney problems. My Grandfather was a keen photographer and had several high-quality cameras. He used a Contessa Nettel quarter plate camera to take black and white photos … It was probably the Alino model. Over time they have faded to more of a sepia appearance. You can see the full set in the photo gallery. I make no apologies for the damaged appearance of these pictures. They are from an old family album and show signs of deterioration over the years. It would take a professional effort to restore them digitally but by using the original scanned images they retain much of their charm.  What has astounded me is the level of detail that has been revealed in the scanned images which was not visible to the naked eye - for example, it is possible to read the lettering on the stone breaker, but it was far too small to interpret on the original photo. 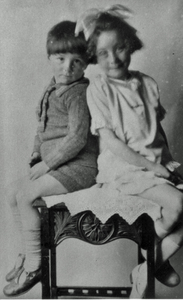 In October 2000, the Falkland Islands Philatelic Bureau issued a series of stamps commemorating the bridges of the Falkland Islands. One of the three stamps featured the Bodie Creek suspension bridge. The other two bridges are the Malo River and Fitzroy River bridges. Bodie Creek suspension bridge also appears on the first day cover – which was illustrated with a beautiful, romantic painting of the bridge in winter. The stamps and cover picture were all painted by a local artist known as Mike Peake.‘

(2)  Charles Peters played the Stroh violin (pictured below right).  From Wikipedia Commons: 'The Stroh violin was an expensive instrument: in 1911 it was offered by the London dealers Barnes & Mullins for nine guineas (£9.45, then equal to $37.80) or twelve guineas (£12.60/$50.40) at a time when a reasonable factory violin could be had for two guineas. It was listed as being especially suitable for use in small theatres and music-halls. The Stroh violin has two horns, one positioned at the end of the fingerboard to project the sound to an audience or recording horn, and a smaller monitoring horn that allowed the player to hear their own sound more clearly. The Stroh violin is much louder than a standard wooden violin, and its directional projection of sound made it particularly useful in the early days of phonographic recording. Wooden violins recorded poorly with the early acoustic-mechanical recording method, and the Stroh violin improved this by producing a fuller, louder sound' 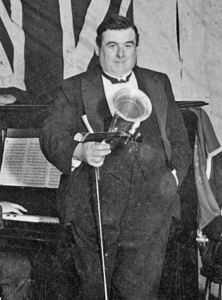