colonial secretary, was born on 22 July 1917 at Budleigh Salterton, Devon, the son of the Rev WH Raymer. He was educated at Marlborough College and Jesus College, Cambridge, where he graduated with a BA (Hons) in 1939.  He joined the colonial administrative service in Nigeria in 1940 and served in the Royal West African Frontier Force from August 1940 until November 1943 when he returned to the administrative service. In 1948 he married Joyce Marion Scott (1920-2009) who was a secretary/typist in the Nigerian civil service - she resigned on her marriage to Raymer. 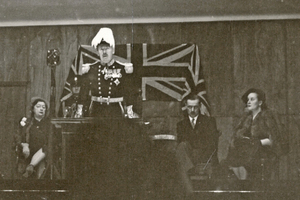 Michael and Marion Raymer (seated on...

In December 1948 he was seconded in the colonial administrative service to the post of colonial secretary in the Falkland Islands for three years, at the end of which he was to revert to the Nigerian establishment. It is very likely that Governor CLIFFORD, who served in Nigeria at the same time as Raymer, encouraged him to agree to the secondment to the Falkland Islands.

Raymer and his wife sailed on the Highland Princess leaving England on 30 April 1949, arriving in Montevideo 21 May 1949.  They arrived in Stanley on 29 May. Raymer assumed administration of the Falkland Islands on 9 June 1949  Governor Clifford having departed for home leave on 8 June 1949.Their son Anthony Jonathan Michael Raymer was born in Stanley and was baptised in Christ Church Cathedral, on 25 March 1951.Among the four godparents of Anthony Raymer was Arthur BARTON. 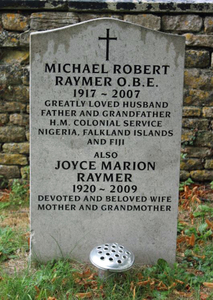 … it was good of you to take the trouble to write me a special letter about his flair for and interest in financial work: what you have said about him will sooner or later be very useful.  As you know, we are always anxious to get a line as early as possible on a promising young officer with a special interest in financial problems, so that we can make the best possible use of these rather rare birds. We will certainly bear in mind the possibility of arranging for Raymer either to be seconded to the Treasury of the Bank of England, or to be attached to some banking or other suitable firm in the City for a time at the end of his secondment to the Falkland Islands.

Raymer was closely involved with Governor Clifford’s plans to reform the governance of the Falklands and to provide a legislative council that was fully elected by the popular vote – rather than one which was appointed by the governor. In 1950 Raymer wrote to the Spectator magazine, in response to an article which had criticized the reforms:

My attention has recently been drawn to a letter from the Rev. R. G. R. Calvert in your issue of August 12th, 1949, on the subject of self-government in the Falkland Islands. The constitution of this Colony was revised in 1949, and not the least important object of that revision was to provide (for the first time) for popular representation in the Legislative Council. The present position is that the Council is composed of an equal number of official and unofficial members with the Governor, as President, having a casting vote but no original vote. In October, 1948, on the eve of the introduction of this new constitution, the Governor, addressing the old Legislative Council, said: ‘I will here remind you that the ultimate objective is a Legislative Council with an unofficial majority which, as you will perceive, can be readily secured when the time is ripe by the removal of one official vote: how soon that day will come depends necessarily upon the use which is made of the new constitution.’

Raymer and his family sailed from Stanley on 14 March 1952 on board RMS Fitzroy bound for Montevideo.  At the expiry of his leave, he reverted to the Nigerian establishment and returned there in August 1952.  By 1953 he was principal establishments officer for the Northern Region at the Secretariat in Kaduna.

Raymer then served in Fiji as 'Controller of Organisations and Establishments' from 1955 until 1962, before transferring to the home civil service as a principal in the Ministry of Defence from 1962 until 1975. He then served as the assistant secretary at the Royal Hospital, Chelsea, from 1975 until he retired in 1982. After retirement the Raymers moved to Apethorpe, principally to be close to their son Andrew (who was teaching in Peterborough) and his family.  The move was a happy one because during their time at the Royal Hospital, the Raymers had come  to know Caroline, Lady Brassey, the second wife of David, Lord Brassey. The Brasseys owned and lived in Apethorpe Hall in Northamptonshire. In the 1970s Manor Farmyard in the village of Apethorpe was developed for housing, and the Raymers, with their friendship with Lady Brassey, moved to Apethorpe  in1982.

Michael Raymer, during his retirement, was a church warden of St Leonard's Church, Apethorpe and served as chairman of the Village Meeting. Marion Raymer was active in village life including flower arranging, the making of kneelers for the Church, opening gardens for charity and welcoming new villagers.  Neither of them spoke often or at length of their time in the Falklands, or other colonial postings. The Raymers had three children; Anthony (born in the Falklands) who served in the Coldstream Guards; Andrew who  for many years the headmaster of a school outside Rochdale, in Lancashire. and a daughter - Amanda.

Michael Raymer died in 2007 and his wife Marion died in 2009. Both are buried in the churchyard of St Leonard’s where they were worshippers.

Tansy Newman; National Archivist; The Jane Cameron National Archives - for the information about Michael Raymer's service in the Falkland Islands as Colonial Secretary.

Anne Chamberlain, Chairperson of Apethorpe Village Meeting - for information about the Raymers life in retirement, and for the quotation from the Spectator magazine.