farm manager, was born at Stanley on 14 March 1931 the elder son of Charles ROBERTSON and Anne, née Chave. In 1934, his grandfather retired and his father took over as farm manager. At ten he attended the government school in Stanley and in mid 1944 he and his brother Peter entered St George's College, a boys' boarding school in the suburbs of Buenos Aires. After leaving school in December 1948 he signed up for a three year cadetship at Darwin with the Falkland Islands Company. 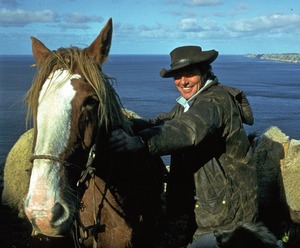 In the spring of 1953, Tom BEATY, manager at Port Stephens, was on overseas leave and unexpectedly decided not to return, so Robertson was sent to run the farm for the forthcoming season. At the end of his cadetship he travelled with his parents to Australia on their leave in April 1954 to meet relations and gained some farm experience there. In 1957 he accepted an offer from the FIC as assistant to the camp manager, Tom GILRUTH, at Goose Green. The new position proved interesting, and varied and for the next two and a half years he made many visits to the Company's farms and islands in the Falkland Sound, regularly visiting Lively Island. He travelled twice to Punta Arenas, Chile, to buy horses for Company farms and clients.

In June 1958 he married Robin Amadio from Sydney, at Christ Church Cathedral, Stanley and moved into the Old Doctor's house (now The Pond House) at Darwin Harbour. They had three children: Kim (b1959), Jaime (b1960) and Gina (b1965). 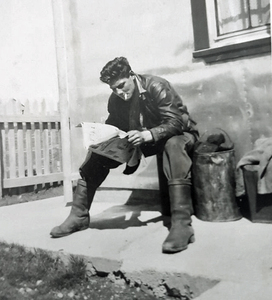 Robertson succeeded his father as manager at Fox Bay West in March 1960.

From the mid 1960s at Fox Bay West several seasons were devoted to grasslands trials over selected areas by rotavating and sowing Yorkshire Fog seed which produced mixed results, indicating the need for further research and trials. More encouraging was a fencing programme of subdivision and initial attempts to devise a system of rotational grazing for the farm. Sheep keds were completely eradicated in the early 1970's and measures taken to combat the hydatid* problem.

A fire in the manager's house at Fox Bay West in 1968 was a devasting loss to the farm and family.

Confronted rather prematurely with the decision of retirement, he stood down as manager in 1980 and the family left for Australia. His working life within the Falklands, almost 30 years, was solely as an employee of the FIC, whom he highly respected. As a Kelper born and raised on a large sheep station he learnt the rudiments of local camp work and life at an early age and this stood him in good stead in his farming career.