Dutch navigator, sailed from the Texel in August 1721 with three ships, Den Arend (The Eagle) Thienhoven [a placename] and De Africaansche Galey (The African Galley), to sail round the world. He intended to explore Maagdelant (the Maidenland of Sir Richard HAWKINS) and was warned by his brother Jan that time available to explore 'Haukinsland' would be short as it was essential to round Cape Horn by mid-January. 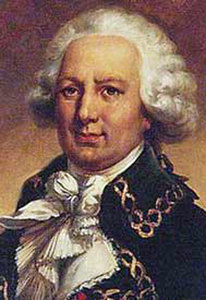 On 30 December 1721 Roggeveen came across the north shore of the Falklands and sailed along it in an easterly direction for two days but without landing. He called the Islands Belgia Australis (because they lay in the same latitude south as the Low Countries did north) although he was aware that some called them Falckland and the French geographer FREZIER had named them the New Islands.

Roggeveen sailed into the Pacific and discovered Easter Island. But when he reached Batavia {Jakarta} the officials of the Netherlands East India Company seized his ship and papers for trespassing into seas assigned to them. He was sent home, arriving in Amsterdam on 8 July 1723. The full transcript of his journal was only discovered in 1836.

Extract from the Official log of Jacob Roggeveen reproduced in Bolton Glanville Corney, ed. (1908),The voyage of Don Felipe Gonzalez to Easter Island in 1770-1, Hakluyt Society