Spanish naval officer. Capitán de navío Felipe Ruiz Puente was the first Spanish comandante gobernador of the Spanish settlement at Puerto de la Soledad (Port Louis). On 17 October 1766 Ruiz Puente sailed from Ferrol with the frigates Liebre and Esmeralda commissioned to receive the Falkland Islands from BOUGAINVILLE in the name of His Catholic Majesty the King of Spain. After meeting Bougainville in the River Plate, Ruiz Puente sailed for the Falklands, entering Berkeley Sound on 24 March 1767, where Bougainville was waiting for him in the La Boudeuse. Bougainville relinquished command on 1 April and Ruiz Puente took possession and hoisted the Spanish colours on 2 April, when a 21 gun salute was fired at sunrise and sunset from both the ships and the shore. The Spanish officers viewed Port Louis settlement (which they renamed Puerto de la Soledad) with considerable dismay noting that the thirty-six 'buildings left behind by the French are not fit to be called houses, they are barracks;' only the house left by the French commander was built of stone and thatched with straw. It is not known what steps Ruiz Puente took to rectify this situation or to strengthen Spanish sovereignty. 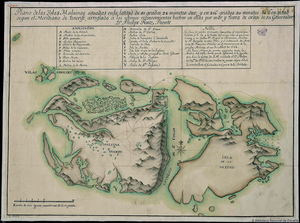 Map of the Falkland Islands made...

However, in November 1769 he sent the schooner San Felipe, commanded by Don Angel Santes , on a surveying cruise to the north of the Islands where he encountered the Tamar, commanded by Anthony HUNT, two miles north of Cape Tamar. Hunt informed Santes that the Falklands belonged to the British and that he should leave the Islands. On his return to Puerto de la Soledad, Ruiz Puente sent Santes back, this time with Mario Plata, an infantry lieutenant on board, with a formal but courteous protest which was delivered to Hunt in San Carlos Water. Santes then returned to Puerto de la Soledad with a further protest from Hunt. It then seems that Ruiz Puente sent Santes and Plata to Buenos Aires to report to Governor Francisco Bucareli, but with orders to enter Port Egmont first so that he could give Bucareli up to date information about the British settlement there. The San Felipe entered Port Egmont on 18 December, but Santes and Plata were not allowed to land and after being supplied with water and some pitch departed the following day. Ruiz Puente remained in Puerto de la Soledad until 27 January 1773 when he retired, being relieved as temporary governor by Capitán de Infanteria Domingo CHAURI, who was stationed at Puerto de la Soledad at the time.