colonial secretary, was born in Jamaica on 13 September 1847, son of Moses, a sugar planter and a Justice of the Peace. His mother Eliza was the daughter of Samuel and Grace Shedden who lived in a modest house in Cheltenham. Frederick had an elder brother Edmund and in due course followed him to Cheltenham to live with his grandparents and attend Cheltenham Grammar School. 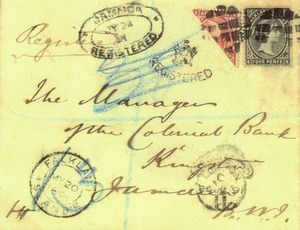 301 Sanguinetti writes to his bank using...

He entered the civil service of Jamaica in 1863. In 1883 and 1884 he was acting commissioner of the Turks and Caicos Islands, a Jamaican dependency.

He arrived in the Falkland Islands on 9 June 1890 on the Kosmos steamer Abydos, and took over the duties of Edward Pakenham BROOKS who departed in July. On 15 July he was appointed colonial secretary, and acting postmaster on a nine-month contract. He was officially on leave from Jamaica and on half salary. Because of the shortage of staff and the extended leave given to Pakenham Brooks his period of service was extended to seventeen months. On the departure of Governor KERR on 29 March 1891, Sanguinetti in his position of senior justice on the roll of Justices of the Peace took over the duties as acting governor until the arrival of Sir Roger GOLDSWORTHY on 13 April 1891. Goldsworthy intervened on his behalf and wrote that 'he had fulfilled his duties here to my entire satisfaction and has at all times willingly accorded me his assistance and advice' and asked that this extension to his service should be treated as special duties to avoid losing valuable pension rights in Jamaica.

He is best remembered in his role as acting postmaster for the issue of provisional bisected postage stamps in 1891 which excited collectors and stamp dealers around the world. The British Post Office had invited the Falkland Islands Government in July 1890 to reduce postage within the British Empire from 4d per half ounce to 2½d from the beginning of 1891. Sanguinetti calculated that this would lead to a loss of £73 per annum in revenue. Nevertheless the Council met in September and approved the decision. But no action was taken to order 2½d and ½d stamps until December 1890 so that until the arrival of these stamps the 1d stamps in stock were cut in half diagonally for use as ½d stamps. Initially the stamps were overprinted '½d' as well, although this practice was soon largely abandoned. There were delays in the supply of stamps in the new denominations. Firstly those ordered by Governor Kerr and Sanguinetti were of unusual size and colours which the Crown Agents would not accept as they did not conform to those recommended by the Universal Postal Union of which the Falkland Islands had been a member since 1879. Secondly the first supplies of new stamps in the correct colours were lost when the Kosmos steamer 'Neko' was in collision in the English Channel off Ushant, and sank within three minutes. A further printing of the stamps had to be ordered. Meanwhile many orders for the overprinted bisected stamps had come from overseas and these had to be turned down by the postal staff in order to protect the small stock of 1d stamps. Finally the new ½d and 2½d stamps were put on sale on 10 September and the overprinted bisected stamps were declared invalid for postage. It was at this stage that many orders for bisected stamps from dealers and collectors were fulfilled, although these are today classed as 'posthumous souvenirs'. 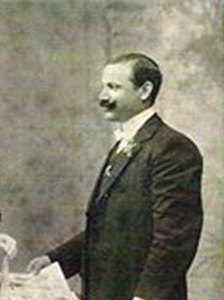 480 A possible image of Sanguinetti

Sanguinetti left the colony on 22 December 1891 having made a favourable impression on all those who had had dealings with him. On 22 August 1898 he was appointed by the governor of Jamaica as the first commissioner of the Cayman Islands, another Jamaican dependency. The commissioner combined administration with the post of judge of the Supreme Court, a position he held until he retired through ill health in 1906.

Editorial comment:  'This rather dapper man [in image 480] does not fit with the image of somebody who was very much liked by the down to earth Cayman islanders, who in the mosquito season, rode around the island wearing a beekeepers hat and veil, and whose house was described by his successor as having almost no furniture. Despite being in office as Commissioner for almost 8 years there is no photo of him, which suggests he wasn't very much bothered by its absence.' (Graham Booth)