doctor on West Falklands, was born at Stoke on Trent in1875, the second son of James and Florence Turner (nee Coxon).

He qualified as a doctor at Guys Hospital with MRCS and LRCP in1899, and while still a student he took part in the brief Graeco-Turkish war of 1897, showing early signs of his enterprise and love of adventure and being awarded the Cross of Royal Order of Saviour by King George of Greece. 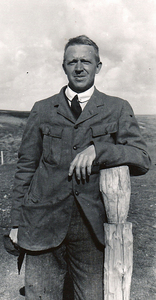 After a brief spell in general practice in England, he joined the Colonial Service in 1909 and was posted to the Falkland Islands that year.  He set sail on the RMS Orissa from Liverpool with his pregnant wife Isabella (Bella) (1869-1915), their two sons, Philip and Guy and their daughter Sheila. Another son, Donald, was born at Fox Bay onboard the ship Malvinas.  The family lived at Fox Bay East, with two local girls to help with the children and animals.

The doctors serving on West Falkland Island were also put in charge of the post office, which served as a shop, a meeting place, a liquor store and where births and deaths were registered. Mail and provisions arrived from Stanley by boat three times a month. Dr Stanley-Turner’s mail orders from the UK were nearly always for photographic material (he processed his own photographs), and journal notebooks in which he wrote a number of articles and books.  Educational books were also sent out from the UK to enable him to home-school his four children.

Each station [Farm] used to send one or more mail men and a number of pack horses, or ‘cargeros’ as they are called locally to carry their mail … the mail was sorted in Port Stanley, and that for West Falkland was put into bags bearing the names of the respective stations and sealed … It was usual for the mailmen to arrive at Fox Bay the night before the mail was due, when they would hand in their outgoing mail. As I was single-handed, I used to try and get much of the work done as possible the same night. Sometimes keeping the office open until after midnight.

Bella Stanley-Turner found life in West Falkland very lonely – particularly as her husband was often away on medical duties. He would travel on horseback to his patients, taking a spare horse and his beloved dog with him, often spending the night away.  It took him eight hours to reach Port Howard. Occasionally he would visit West Point Island by schooner and commented that the weather usually blew a gale and rained a great deal.   However, besides home-schooling, the children had a wonderful childhood, riding, fishing, shooting and walking.  In those days communications were difficult and mainly done by Morse code. Stanley-Turner was asked by the Colonial Secretary in Stanley to investigate discretely the rumour that there was gold near White Rock. This he did - heavily disguised with a fishing rod and gun but was unable to find any gold. 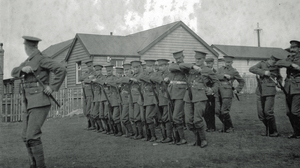 Stanley-Turner became a master blacksmith in his spare time.  On occasions he joined whaling expeditions on Salvesen’s whaling boats at New Island. He was a very good draughtsman sketching in great detail the equipment used by the whalers. He subsequently wrote a small book about his experiences, complete with meticulous diagrams of the harpoons used.  He also published a number of articles variously entitled A Falkland Island Wedding; The Autobiography of a Kelper; and The Romance of the Falkland Islands. He also compiled a history outlining the discovery of the Falkland Islands.

On 8 December 1914 the Battle of the Falkland Islands took place, and Governor William ALLARDYCE sent Stanley-Turner a message saying, ‘War has broken out, come urgently; your wife and children are to remain in Fox Bay’.  He remained in Stanley for eight months which was something he hated. During this time, he joined the local Defence Force and was promoted to major. He was for a brief time in charge of the Defence Force. 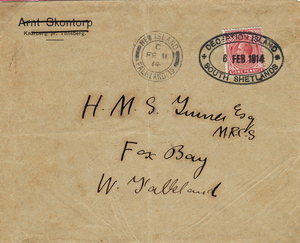 Whaling mail from the South...

Stanley-Turner was made a justice of the peace, he became President of the Board of Health, a stipendiary magistrate and he was the coroner for West Falklands.    In January 1915 he boarded the German ship Josephine and took the German crew prisoners of war, declaring the ship to be the ‘Good and Lawful Prize of His Majesty’s Ship Carnarvon’ 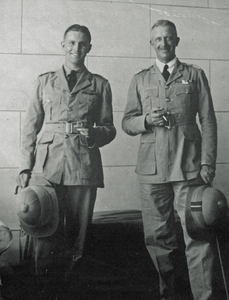 Father and son in Egypt

In later years he reminisced that ‘the family had loved their time in the Falklands on the whole, but he missed intellectual chats with his old friends!’ Dr. Henry Stanley-Turner received the MBE for his services to the Falkland Islands.

Stanley-Turner was keen to join the Army but first married an old family friend, Dorothy Bayly (1888-1962). They had one daughter by his second marriage - Dorothy Stanley-Turner (1916-1995), a well-known woman racing driver, and also like all the family, a very good shot at Bisley, 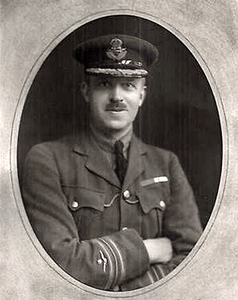 He left for France in 1916 with the Field Ambulance and 58th Division, but he was invalided home in 1917. In 1919 Stanley-Turner joined the Royal Air Force as a wing commander.  His son Guy went to Cranwell in 1922; they were the first father and son to serve together in the RAF and were stationed in Egypt together.

Stenley-Turner was appointed Principal Medical Officer, Middle East, and examiner in physiology at the University of Cairo.

On retirement he bought a practice at Abingdon and was also a physician at Abingdon Joint Hospital for Infectious Diseases. He was vice-chairman of the local branch of the British Legion and served on Abingdon Town Council. Subsequently he had a medical practice at Brookwood, Surrey. 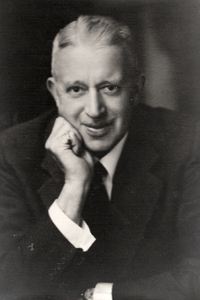 Stanley-Turner was a fine shot and in 1930 he helped the Falkland Islands Team, who were competing at Bisley, to win their competition.

Dr. Henry Stanley-Turner died in Guys Hospital in 1951 and his ashes were scattered on the Running Deer Ranges at Bisley.