colonist, was born at Marridge Hill near Ramsbury in Wiltshire, to a family of prosperous sheep-farmers who had been established in the area since the sixteenth century. He was the third and youngest son of John Waldron and his wife Jane, née Martin. In 1866 his elder brother, James WALDRON, visited the Falklands to examine the potential for sheep farming. As a result of this visit, both James and Henry took out leases on land around Port Howard. In September 1867 they arrived in the Falklands on the barque Diana, carrying all the materials necessary to establish a settlement. 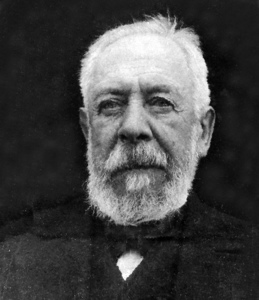 354 “Gentleman of a bygone generation…”

In 1874, once things at Port Howard were on a firm footing, Henry took out the lease of Beaver Island and gradually began to spend more and more time there. He bought the island outright in 1886 and continued to live and work there even after James returned to England in 1889. He was appointed a Justice of the Peace in 1881 and took his duties very seriously.

Henry Waldron never married and had (and perhaps cultivated) a reputation as an eccentric. When Governor ALLARDYCE visited Beaver Island in 1906 he wrote of his host:

The leasee is a pleasant elderly hospitable, unmarried, gentleman of a bygone generation, but I should say that he was neither a very practical nor an ardent sheep farmer. He expressed himself as extremely glad to see us but not altogether surprised as he had dreamt that we were coming. 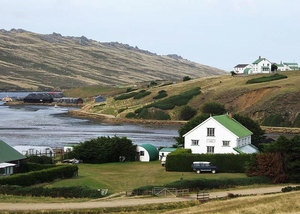 After World War I, Henry Waldron travelled back to England and died there on 11 August 1919, from the effects of a heatwave. An affectionate obituary in the Falkland Islands Magazine of November 1919 gives a vivid picture of this unusual man, speaking of his skill as a cook, 'a connoisseur and an artist in matters culinary', his fascination with legal texts, ' which he read and studied with engrossing interest', his belief in homoeopathy, 'he was never happier than when he was able to use his knowledge for the assistance of the sick' and his kindness, ' no one derived more genuine delight from the spending of his money on giving pleasure or assistance to others'. Allardyce's opinion of Henry Waldron's farming credentials is supported by the obituarist: 'Mr. Henry cared more for the development of his own theories than he did for the amassing of wealth and no one can accuse him of over stocking or failing to improve his land by fencing and by planting grass and tussock. His farm was his hobby'. In summary, the obituarist recorded that 'the news of his death in England ... was received with universal regret. ...We had all grown to admire his loveable nature, full of generosity, kindliness and originality and we recalled with pride the prominent part played by him in the life of the Colony for over fifty years'.

Though far from the conventional image of a pioneering sheep farmer, Henry Waldron clearly made a great contribution to life in the Falklands in the early days of settlement. In addition to establishing with his brother one of the most notable farms on West Falkland, he successfully put his own less worldly ideas into practice on Beaver Island. He must have brought, to a society necessarily preoccupied with the constant physical struggle for survival, a refreshing breadth of vision, a wider dimension which enriched the life of those around him. 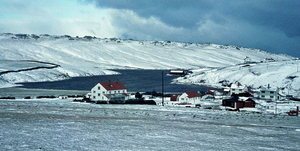 A winter's scene at Port Howard