grasslands officer; was born in Glasgow 13 May 1940, the younger son of Edward M Young MA (headmaster) and Mary Miller Young, née Durney (schoolteacher).Educated at the High School of Glasgow 1945 – 58; graduated BSc (agriculture) in 1962 from Glasgow University and M.Sc. (grassland improvement) from Edinburgh University in 1964. 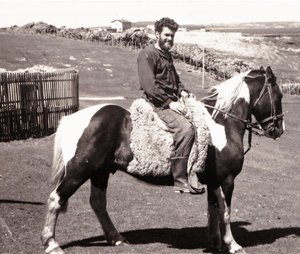 The Grasslands Officer at work

Young was appointed on a 3-year contract to “Investigate, experiment and report on methods of improving the grasslands of the Falkland Islands”.

He arrived in the Falklands in 1965 and over time established trials on grass varieties, fertiliser regimes and trace element supplementation. Trial work was delayed by waiting for the allocation of a budget, and the lead time required for experimental materials to come from the UK.

He travelled widely, set up trials throughout the Islands, and was involved in discussion and advice on appropriate methods of grassland improvement, much of which was already available in existing reports by MUNRO, GIBBS, DAVIES and others. 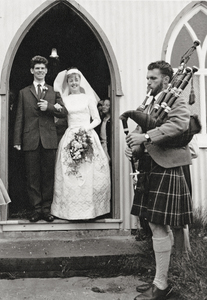 Colin Young playing the pipes at the...

He contributed to the Falkland Islands Journal and reported on his own trials.In common with other men of similar age, Young joined FIDF following the Argentine plane hijacking in 1965.

He returned to the UK via South America in 1968 and worked as an agricultural adviser with the West of Scotland Agricultural College and the North of Scotland College of Agriculture. He married Rita Dinnes - ex BAS - in1973. Young had a spell of deer farming, and then worked in the agricultural supply trade. In 1995 he moved into management and health and safety training and consultancy, working with the Scottish Agricultural College and Aberdeen College, and commercial organisations. He graduated M.Sc. in management from the Robert Gordon University in 2000.

Following some years of part time working Young retired in 2014

See: Report on Pasture Improvement Experiments Carried out in the Falkland Islands During 1965-1968 by C D Young - 1968.pdf

For an account of the wedding at which Colin Young played the pipes - See: Falkland Islands Monthly Review 7 February 1966