admiral, was born in London on 19 January 1888, the son of a barrister, Surtees Harwood Harwood and his wife Mary Cecilia, née Ullathorne.

Harwood became a naval cadet in the Britannia in 1903 and in his examinations for lieutenant received first class certificates in all subjects. He specialised in torpedo warfare and served as torpedo officer in a number of ships, although without seeing action, in World War I. 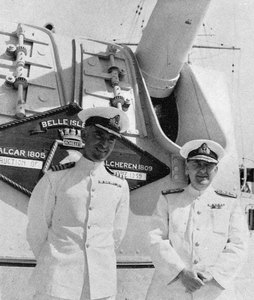 After the war, Harwood served in the South American squadron for two years, learning Spanish and becoming acquainted with the countries and people of Latin America. His later postings were largely on the staff, although he was fleet torpedo officer in the Mediterranean.

Harwood married Joan Chard in 1924; they had two sons, both of whom entered the navy. In 1928 he was promoted captain.

In 1936 Harwood was appointed commodore in charge of the South American division of the America and West Indian station.After the outbreak of war in September 1939 it was learnt that the German pocket battleship Admiral Graf Spee, Captain Langsdorff, was operating in the South Atlantic. She was larger and more powerful than any of Harwood's command and she had sunk nine ships before her engines began to malfunction. (See: editorial comment below) 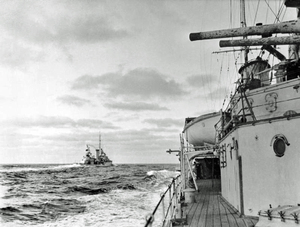 Harwood correctly anticipated that the Graf Spee would try to attack a convoy off the River Plate and lay in wait for her with two light cruisers, Ajax and Achilles and the larger Exeter, Captain BELL.

Battle was joined on 13 December: as his ships were out-gunned by the Germans, Harwood attacked the Graf Spee from two directions, but Exeter was damaged and had to sail for Stanley, while the two other ships disengaged after being hit. 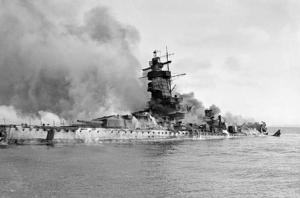 The Graf Spee took shelter in neutral Montevideo but was obliged to move on and, convinced that larger British warships were waiting for him, Langsdorff scuttled his ship on 17 December and committed suicide on the night of 19-20 December.

Harwood's success was a welcome boost to British morale: he was promoted rear-admiral and knighted by radio (to KCB).His fleet, joined by Cumberland, regrouped in Stanley, the wounded were treated in KEMH and an impressive funeral service was held for the dead in the Cathedral on 18 December.

In May 1940 Harwood presented gifts (powder compacts with the crest of HMS Exeter) to a number of ladies in Stanley who had helped to nurse the wounded 'with grateful thanks for their devoted service' in a ceremony at the Town Hall.

Harwood returned home to a staff post late in 1940.He was appointed commander-in-chief Mediterranean in 1942. It was not a successful posting and he was moved to a less demanding one before being invalided out of the navy in 1945 in the rank of admiral. 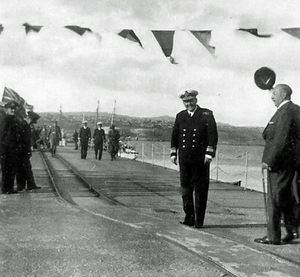 Harwood died at home in Oxfordshire on 9 June 1950.

Harwood was a keen sportsman and a person of natural charm who enjoyed much goodwill in Latin America thanks to his knowledge of Spanish. Streets were named after Harwood in Uruguay and on his death requiem masses were said for him in Montevideo and Buenos Aires.

(1)  Jonathan Harwood, Admiral Henry Harwood's grandson, comments that: 'the British did not know they were hunting the Admiral Graf Spee.  All the British knew was that they were hunting a German raider.  It was thought that this raider would likely be either a pocket battleship or a Hipper-class cruiser.  Admiral Graf Spee had managed to travel to the South Atlantic undetected and her correct identity was never disclosed by any of her merchant ship victims.  At the at the Battle of the River Plate the British ships assumed they were fighting the pocket battleship Admiral Scheer.  It was only late in the day on 13th December, while entering the River Plate estuary, that Captain Langsdorff send a wireless message to HMS Ajax requesting the ship to pick up survivors from a British tramp steamer the SS Shakespear which the Admiral Graf Spee had encountered (and may have been planning to sink).  Only then did the British discover that they had been up against the pocket battleship Admiral Graf Spee.  In the event Langsdorff decided not to sink the Shakespear and continued to proceed on his journey to Montevideo, the opinion being that the reputation of his ship and crew would be damaged if the Shakespear was sunk in an area regarded as territorial waters by the adjacent neutral countries.' 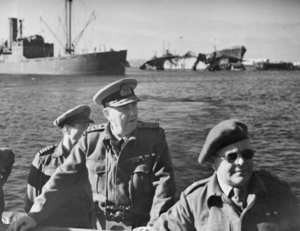 (2) Henry Harwood was a committed Roman Catholic all his life. He led two Royal Naval pilgrimages to Rome - in 1904 and in 1933 - and on both occasions he met the Pope (Pius X and Pius XI respectively). His catholicism greatly aided his diplomacy during his time in the South American command. His faith was not without struggle -  'Harwood had told Joan [Harwood's wife] that the reversals in war in 1940 had tested his faith' (Peter Hore). When Harwood was appointed as Assistant Chief of Naval Staff in 1940 he took at seat on the Board of Admiralty. Harwood thus became the first Roman Catholic since the Glorious Revolution in 1688 to sit on the Board of Admiralty.

(3) Some historians have tended to be harshly critical of Harwood's reputation - most notably Corelli Barnett in his book 'Engage the enemy more closely.'   More recent biographies have been far more generous in their assessment of Harwood's time as Commander in Chief Mediterranean. Harwood suffered from a lack of  maritime resources - most  importantly capital ships and aircraft carriers. Air Chief Marshall Arthur Tedder, the air force commander the Mediterranean was consistently reluctant to provide adequate air cover for Harwood's ships. General Bernard Montgomery, of the 8th Army, had little understanding or sympathy for the difficulties and challenges of naval operations. Montgomery was highly critical of Harwood's performance as C-in-C and he continually undermined Harwood's authority. This ill-informed criticism led to a loss of confidence in Harwood at the Admiralty and in the mind of Prime Minister Winston Churchill. 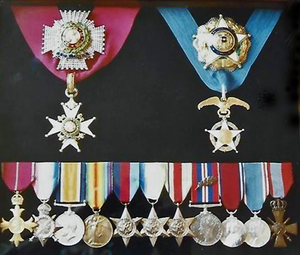 'However Henry Harwood will be forever known as the victor on 13 December 1939 at the Battle of the River Plate ... Churchill was delighted with Harwood for having driven an enemy pocket battleship into a neutral harbour - in spite of far heavier metal and commanding range ... In the sombre first dark winter of the war, the Battle of the River Plate was in Churchillian prose "a flash of light and colour ... a great action which will long be told in song and story". Nothing can take this triumph from Harwood'  (Peter Hore).

For HMS Ajax see: HMS Ajax returns home after the Battle of the River Plate

See:  Battle of the River Plate

See:  Launching of seaplane by catapult from Royal Naval cruisers

For an eyewitness account of the Battle of the River Plate by a member of the ship's company see: Captain A E Toase Royal Marine (BBC WW2 The People's War - an archive of memories of WW2 by members of the public). Aiden Toase was injured during the battle and was subsequently nursed at KEMH in Stanley after the battle. Toase was awarded the DSC, and he later married the Falkland Islands-born Cora Newing.