governor, was born in Bovey Tracey, Devon on 12 February 1881, the son of Henry Algernon Hodson and Sara Wormald Wienholt.

He was educated in Italy and Mulgrave Castle School, Yorkshire.

At the age of 19 he emigrated to Australia where he worked on a sheep farm in central Queensland. In 1902, he enlisted as a corporal in the Australian Commonwealth Horse (Queensland) D squadron for the South African war. He departed for duty on 19 May but arrived too late for active service. This was the beginning of an extensive career in Africa. He worked in Durban before moving to Johannesburg and Pretoria with a government appointment. In 1904 he was commissioned into the police force of the Bechuanaland Protectorate at Mafeking, which involved a journey to the Kalahari Desert in 1905. 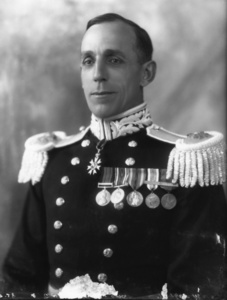 One of Hodson's later missions was to the Damaraland frontier during the time of the Herero and Nama Wars in German South-West Africa {Namibia}. He was much involved in trying to reconcile conflicts between tribal chiefs and his several political missions covered an important part of the history of Bechuanaland. During this period he travelled extensively and published Trekking the Great Thirst: Travel and Sport in the Kalahari Desert.

Hodson's subsequent African service was in the north; first as magistrate in British Somaliland (1912-14) and then as British consul in southern Abyssinia at Mega (1914-23) and in south-west Abyssinia at Magi (1923-26) (both now parts of Ethiopia). Again he travelled extensively (although on one trek things became so desperate he had to abandon his golf clubs in the Abyssinian highlands). A grammar of the Galla language (1922) and two more travel books resulted: Seven Years in Southern Abyssinia (1927) and Where Lions Reign (1929). 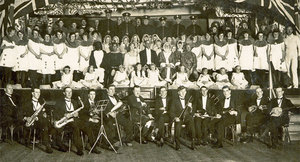 On 22 December 1926 he was appointed governor of the Falkland Islands and Dependencies, a very different situation from his African experiences. Lt Col Alexander Elder BEATTIE occupied the post of acting governor in Stanley until 8 June 1927 when Hodson arrived aboard MV Lagarto; he was sworn into office on the next day. Thus, 9 June 1927 marks his formal assumption of administration of the Falkland Islands and Dependencies.

The whaling industry had become the principal source of revenue and a major source of contention in the Falklands at the time when Hodson arrived. An unexpected development during his period was the abandonment of the old floating factories moored in harbours and subject to governmental control, and their replacement by new factory ships operating on the high seas with, at the time, no regulation. This caused the deliberations on preserving the whaling industry of the Islands and Dependencies, by conservation of whale stocks, to become increasingly complex. Hodson visited the Dependencies to see personally their circumstances and the whaling industry. 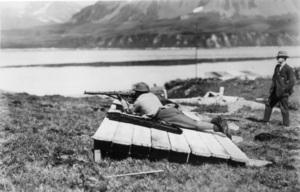 In 1927, shortly after his arrival, he made a winter visit to South Georgia, the first by any governor. He travelled aboard Fleurus (Capt C Adamson) a vessel contracted to deliver mail to the Dependencies in 1924. Fleurus left Stanley on 6 August and had returned by 13 August; thus it was a brief visit. His interest remained, however, and in the next year he returned to the Dependencies.

There was some controversy in his dealings with two scientific investigations. In 1924 Hugh MUNRO, a specialist from the New Zealand Department of Agriculture visited the colony and prepared a detailed report, recommending the establishment of an experimental farm, which was set up in February 1926. The farm was organized and livestock acquired with the support of the previous governor (Sir John MIDDLETON) and LegCo. Governor Hodson was, however, of a different opinion and, on 9 January 1928 wrote to the secretary of state that 'A grave error of judgement has been made throughout in the conception and the establishment of the Experimental Farm'. Thus the farm was closed shortly after it came into being. 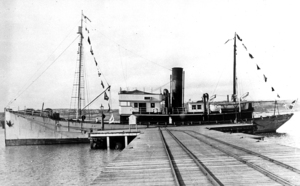 Similarly he inveighed against the expenditure (from the colony's budget) on the Discovery Investigations. While there had been doubts about the value of the research, partly from the complaints of the Sheep Owners' Association, these culminated on 9 May 1928 in a 29 page memorandum which Hodson submitted to the secretary of state recording '... my unaltered and unalterable opinion [is] that the Discovery expedition and all its works should forthwith and forever cease'. This acrimonious altercation persisted with bitter comments from all sides despite an order from the secretary of state for the governor to apologise to the Discovery Committee.

Hodson's judgement in these circumstances may be questioned in view of the subsequent recommendation of the ODA-funded Agricultural team (1969-70) which stressed the need for an agricultural research and development presence on the ground, and which led to the recruitment of the utility of the Grassland Trials Unit and continuation of the Discovery Investigations. 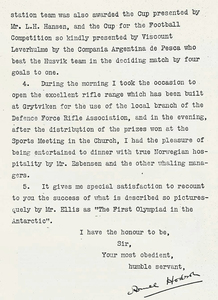 "The first Olympiad of the...

Governor Hodson's second official visit to the Dependencies was much more comprehensive. He left Stanley on 2 February 1928, aboard Fleurus (Capt Lauritz Karlsen) and went to the South Shetland Islands where his first stop was at the Deception Island whaling station. Here he met many of the whalers, recorded notes on the industry, navigation problems and the distribution of sea ice. The voyage continued through the Neumayer Channel to Wiencke Island before turning north. On 17 February the South Orkney Islands were reached although the way was encumbered with pack ice. Fleurus called at Borge Bay, Signy Island, where they also met some whaling vessels. Subsequently Hodson interviewed a party of Argentine meteorologists bound for Laurie Island who provided details of the station and its newly installed radio transmitter.

South Georgia was reached on 22 February where the governor's arrival was saluted with 17 blasts of dynamite atop a small hill near Grytviken. Hodson inaugurated the whalers' summer sports and presented a 'Governor's Cup' on 23 February. At King Edward Point he also opened the new rifle range. The granite memorial over Sir Ernest Shackleton's grave was unveiled on 24 February by Hodson in the presence of the magistrate (Frederick Black ALISON) and his wife, a large group of administrative staff and whalers, and representatives from RRS William Scoresby of the Discovery Investigations. Stanley was reached on 1 March 1928. A note published in the Geographical Journal described the voyage and included a selection of photographs taken by Hodson (1929). 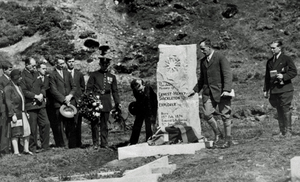 In 1928 the Falkland Islands and Dependencies Sealing Company was formed to exploit sea lions, originally from Belville and later from a factory at Albemarle. For a variety of reasons, although it had the governor's endorsement, it proved unsuccessful.

Governor Hodson was on leave in Britain from 11 June 1928 to 9 January 1929. During this period he married Elizabeth Charlotte Sarah Hay on 15 November 1928 in Aberdeen. His new bride accompanied him to the Falkland Islands and after a later visit to Britain, returned in December 1929 with her father and sister. 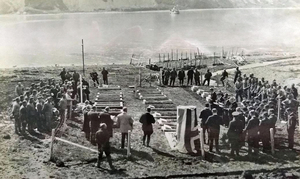 Other events during his tenure as governor were many. Notably there are many indications of his enthusiasm for a variety of sports. Details of the scores for rifle shooting competitions, one of his particular hobbies, frequently appeared in the Government Gazette. He was responsible for the building of the gymnasium and public baths. The former was used for boxing and gymnastics, both greatly encouraged by Hodson. The Church Magazine reporting Hodson's first Stanley Sports meeting in 1927 reads:

For the racing on 26th December Mr. Hodson entered his two horses 'Hurstwood' and 'Aravel', which he had purchased shortly beforehand from Mr. J. Robertson of Port Stephens, for several races and to the general delight was successful in carrying off two seconds and two thirds. His Excellency rode 'Hurstwood' in the Corinthian race, open to Falkland Islands bred horses ridden by their owners at weights of twelve stone and over, and came in second in a really thrilling finish. This sporting action on the Governor's part was most enthusiastically welcomed. It is surely rare indeed that a Governor of any Colony actually takes part in a race on level terms with all-comers and in this Colony it has created a precedent which we shall hope to see followed in future. 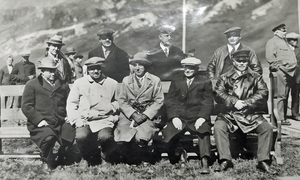 Hodson (seated in the centre)...

In Stanley he also gave children's parties which were long remembered. His literary and theatrical activities included writing and directing two plays The Troubles of Santa Claus and The Downfall of Zachariah Fee.

Hodson was also a social reformer; among other things he was responsible for the abolition of fees for medical treatment and other improvements in public health, the introduction of the eight-hour working day, and the rediffusion broadcast system. The last, in Stanley and later in nearby Camp areas, was transmitted over the existing telephone wires until the mid 1980s. 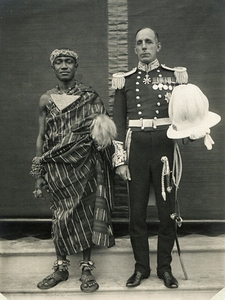 Electric lighting, supplied from the wireless station, came to Stanley in 1929. Government House and the Town Hall were the earliest buildings illuminated before electrification began to be extended generally. This also allowed wireless transmission of the rediffusion service outside Stanley.

The earliest of what is now known as 'social housing', inexpensive accommodation when house prices were high, was established in Stanley by the Governor and became known as 'Hodson Villas'. In Government House in 1930 the stables were converted by Hodson to provide four servants' bedrooms and a large recreation room in what had originally been the loft. 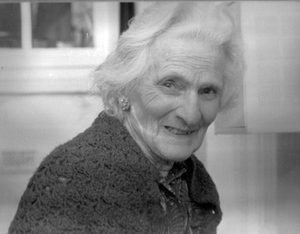 Hodson received a commission back in Africa in 1930 and left the Falkland Islands aboard RMS Orduna on 3 February 1931, handing over the administration to John Medlicott ELLIS, the colonial secretary, on the same day. Sierra Leone was his next destination where he became known as the 'sunshine governor' and introduced the wired rediffusion service there in 1934. During his tenure major mineral deposits were discovered.

His last post was as governor of the Gold Coast {Ghana} from 1934 until his retirement in 1941. He inaugurated another rediffusion service in Accra.

Hodson was decorated with several medals for African service and in 1922 awarded the CMG. He was advanced in 1932 to KCMG and subsequently became a Knight of Justice of the Order of St John of Jerusalem. He was a vice-president of the National Rifle Association in the United States and listed his recreations as big game hunting and fishing, yachting, golf, and rifle shooting. The National Portrait Gallery, London, has a formal photograph of him taken on 1 October 1928 by the Bassano and Vandyck Studio. Two place-names in the Falkland Islands Dependencies commemorate him, both mapped by the Discovery Investigations in 1930: Hodson Point is in Fortuna Bay, South Georgia, and Mount Hodson, the highest peak of the icecap of Visokoi Island, South Sandwich Islands (1005m). 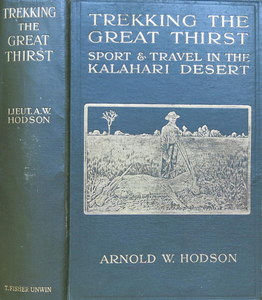 Although his Falkland years were a brief interval in a varied and colourful career spent mainly in Africa, Hodson did much to enliven and improve Stanley. But his closure of the experimental farm put the cause of agricultural development in the Islands back by a generation.