prince and royal visitor, was born Albert Victor Christian Edward at Frogmore in Hampshire on 8 January 1864, eldest son of Edward Prince of Wales (later King Edward VII) and his wife Alexandra. Born prematurely, the young prince enjoyed poor health and showed little mental ability or interest. He and his younger brother GEORGE (later George V) were close and both became naval cadets in 1877. 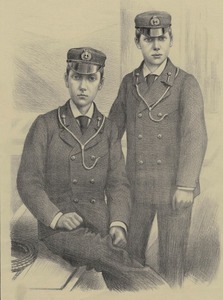 In 1879 it was decided that the two princes should join the fully-rigged cruiser-corvette, with auxiliary engines, HMS Bacchante on a three year world cruise. They were supervised by their tutor the Rev John Neale Dalton, who was later to record the voyage in a ponderous two volume work of 1,500 pages, supposedly written by the two princes, but in reality almost entirely Dalton's. Bacchante arrived in Stanley on 24 January 1881 with a squadron of four accompanying ships after a slow (fifteen days) and stormy passage from Montevideo. Stanley, wrote Dalton, resembled an Irish village snugly nestling on the hillside and he went on to record the Islands' population, imports and exports, revenue and expenditure and cost to the home government (£500 a year). Bishop STIRLING called on board to describe the work of the missionaries in Tierra del Fuego, and on 25 January Governor KERR and the colonial secretary COLLINS also called. But a signal brought down by ship from Montevideo reported trouble at the Cape of Good Hope: the excursion to a penguin colony arranged by Captain PACKE was cancelled, the ships got up steam and Bacchante left by 7.30 the same evening. Dalton's final thoughts on the colony were that it could best be exchanged with the French for their territory of New Caledonia, but these tactless remarks passed unnoticed in the bulk of his book.

The cruise, study at Cambridge and Heidelberg, a spell in the army and the dukedom of Clarence and Avondale failed to effect any improvement in the Prince's prospects. He was betrothed to marry Princess Victoria Mary (May) of Teck in February 1892, but he died of pneumonia on 14 January at Sandringham. For the Princess, who later married his brother George and became Queen Mary, and for the country, it was a release. 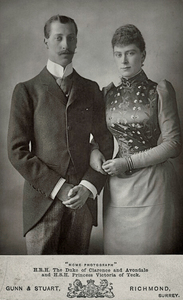