farm manager, was born at San Julian, Argentina, a family farm, on 2 June 1918, the son of Robert Blake and Edith Maclagen Blake, née Wedderburn. Educated at Eton and Cambridge University he put his name down for the Colonial Service whilst still studying, a somewhat surprising decision in view of his family's extensive farming interests in the Falkland Islands and South America but understandable in the context of that service being considerably depleted by enlistment in the forces following the outbreak of war in 1939, and there being an elder brother. He began his Colonial Service in 1940, following a spell in the Royal Artillery, by being sent as a district officer to Sekondi in the Gold Coast {Ghana}, travelling from village to village, often on foot, accompanied by a cook and a Ghanaian clerk whom he highly regarded. He warmed to the cheerful local people and learnt their language. One of his posts was that of receiver of wrecks, a responsibility which was enhanced by the war which led to boats being washed ashore from time to time. Blake was warmly regarded by the native population and when he left a prominent citizen pledged to fund a return journey. He left the Gold Coast and the Colonial Service because his elder brother Robert, an RAF pilot, was killed on active service during the war and the family turned to him to manage the Holmested Blake Farm at Hill Cove, West Falkland, following the imminent retirement of Hugh HARDING. He arrived soon after the war ended and served as a cadet from 1947 until assuming the managership for the 1952-3 season. 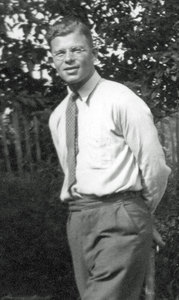 It was not an easy succession because Harding was a highly popular manager and the change resulted in one or two resignations, notably that of the foreman. There was much to do on the farm because of neglect following the depression of the 1930s which was followed by World War II when there was a severe shortage of materials. A programme was put in place involving the replacement of houses and modernisation and the erection of a recreation hall and schoolroom, all built with local labour. Upon his return from a first leave in Britain, Blake brought back a cine projector and films which proved so popular that other farms followed his example and Government then established a film library.

Blake's basic shyness concealed a deep concern and regard for the welfare of the people of Hill Cove. Not fully happy with inherited wealth, he settled most of his shares in the Company on long-standing employees following his retirement. He was an innovative and successful manager who increased wool production and was held in high regard by Hill Cove people. In 1965, he handed over management of the farm to his cousin LG (Tim) BLAKE and returned to England where he became Farms Director of the Falkland Islands Company in London in which capacity he visited the Islands in alternate years.

He married Doreen Dulcie Workman in 1942 but the marriage did not survive the move to the Falkland Islands and ended in 1955. Blake married Susan Copleston in 1966, a very happy and successful union which, during their time at Richmond, Surrey, became a welcoming focal point for visiting Islanders. He resigned from the Board of Directors of the Falkland Islands Company in 1978 having been unable to reconcile himself to the loss of independence of the Company following a succession of takeovers which began in 1972. He died at Yeovil, Somerset, on 17 January 1998.