headmaster, was born on 12 August 1920 in Widnes, Lancs, the sole child of Alfred Booth, a co­operative grocery manager, and Alice May Booth, née Parker, a milliner.

Educated locally in elementary school and at the Wade Deacon Grammar School, Widnes, he trained as a teacher at Chester College. By this time World War II had broken out and he served as a chemist in a chemical defence research establishment for the duration. On release he taught in various schools of the Liverpool Education Department for five years. During this time, in 1946 he married Jessie Kay, a Hollerith machine operator (an early form of mechanical computing). He had great interest in the natural sciences, flowers, birds and wild life. Most of his vacations were spent in the mountains of the British Isles. 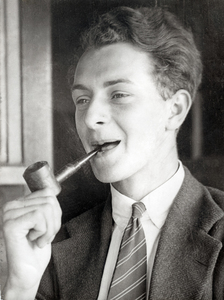 53 Stuart Booth as a young man

In 1951 he answered an advertisement for a teaching post in the Falklands and was accepted as a teacher in the Stanley Senior School. The school leaving age was fourteen, although there was a continuation class for those pupils who wished to continue for a further year. In the following years a science course was developed and in time a science laboratory was built and equipped. There was, of course, little or no road transport outside Stanley but expedi­tions to Kidney Island on the government harbour launch Alert were enjoyed by groups of senior pupils. Booth and his wife walked along the Wickham Heights to Ajax Bay, living mostly on pemmican and porridge. In those days both staff and pupils were occupied in the summer months with gardens, peat-cutting and rickling*. It was possible to fish locally along the coasts (no minefields).

In 1964 he was appointed headmaster of the Stanley schools. In 1968 the age limit was raised to fifteen, giving the senior pupils the opportunity to extend their education. At that time there were few job opportunities in Stanley for girls. A few trained for nursing, but most available jobs were in domestic service, mainly with farm managers in Camp. With the extra year available Booth initiated a commercial course: book-keeping, shorthand and typing to RSA standard, with himself teaching book-keeping and his wife teaching shorthand and typing. The course proved very successful and many pupils passed the RSA examinations and found careers in various offices.

In 1970 the school was badly damaged by fire, which meant that for several months some classes had to be held at 44 Davis Street while the main building was repaired. The frequent climbs up and down Davis Street/John Street each day were good for the wind if not for the limbs.

Booth retired in 1976 and then had a varied life acting as a locum for officers on leave. Among other positions, he served as harbour master, customs officer and central store officer. When Madge BIGGS retired he took over the position of librarian and also found himself almost overwhelmed with requests from a number of farms and small businesses in Stanley to deal with their bookkeeping and accountancy. 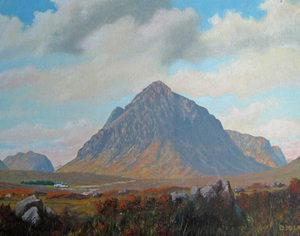 A painting of the Scottish...

It was not until he was eighty years old that he retired for the second time from all the further work he had taken on. In addition to other responsibilities, he and his wife Jessie were both active as JPs.

They now spend their time bird-watching, walking and gardening. They also make regular visits to Australia, to the family of their unofficially adopted daughter, Joan Halliday.

The Booths lived at Racecourse Cottage in Stanley, their home  from 1974 until 2014.

Stuart Booth died aged 94 on 4 February 2015. Jessie Booth died sixteen days later on the 20 February, after 69 years of marriage, at the age of 99 years. Stuart's funeral was held on the 13 February 2015 at the King Edward VII Memorial Hospital day centre in Stanley. This venue was chosen to allow Jessie to attend.  He is buried in Stanley cemetery and his wife lies next to him.

Stuart WALLACE: a former pupil of Stuart Booth and a Falkland’s businessman, says  'The Booths were lovely people; they made the world a better place'.

Joan SPRUCE, another former pupil of Stuart Booth, and a fellow JP with Jessie Booth recalls: 'I very much respected him as a teacher, he was very sweet really and we could always divert him during maths lessons to something less of a brain strain.   I think we all secretly amused him.  I could never bring myself to call him Stuart.  Jessie was a lovely person too - I was a new JP sitting with her on several cases - thank Heaven for her leadership in a maze of the law.'

In the Booth’s home, Racecourse Cottage, an oil painting hung on the wall which featured the iconic Scottish mountain Buachaille Etive Mor, (see image 1590). The painting was bequeathed to the Scottish Mountaineering Club after Stuart Booth’s death, and it now hangs in the sitting room of SMC club hut, Lagangarbh Cottage, in Glencoe.

On vacation in retirement

In an article about Stuart and Jessie Booth, and the painting, SMC member Colwyn M Jones writes: ‘Stuart was also a mountaineer. I was told by his unofficially adopted daughter, Joan Talbot (née Halliday), that he was a member of a mountain rescue team …  and was reported by many people to have climbed in Scotland and Wales before 1951, and later continued visiting Scotland when back in the UK on leave.  He is mentioned in the book Penguin Summer by Eleanor Rice PETTINGILL (1962).  He accompanied the author and her husband Sewall, to film penguins on a trip to Sparrow Cove ... ‘Mr Booth was an accomplished hiker and mountaineer he always walked in the lead with his long strides.’ Joan Talbot (and others) told me he had climbed on the ‘mountain in the painting’ but had experienced, ‘a particularly hairy experience’ to quote him. I gather the weather had turned to their disadvantage during the climb, but I have been unable to pinpoint the date or the climbing route on which they found themselves.  It seems that it was in memory of this adventure that he purchased the oil painting.

The Booths had the painting hanging in their various houses on the Falklands for perhaps 64 years.  The painting hung on their sitting room wall at 3 Ross Road and then their home at Racecourse Cottage. Mr Booth was reported to be very fond of it and the inclusion of its disposal in his will shows it meant a great deal to him … It seems he wanted to repatriate part of himself or his memories, experiences or longing, conveyed through the oil painting, to his original home, while he himself remained to be buried at his new home in the Falkland Islands.

Two other climbing artefacts survive the Booths and are on display at the Falkland Islands Museum and National Trust in the Historic Dockyard Museum, Ross Road in Stanley.  They are two ice axes confirming that the couple were mountaineers, and indeed winter mountaineers'.

(This editorial comment is based on an original article published in the Scottish Mountaineering Club Journal 2020 and is reproduced with the permission of the editor, Peter Biggar).