b 1946 from Falkland Islands


local historian and author, was born in Stanley on 17 April 1946; she is a fifth generation Falkland Islander. Her parents were Walter Felton and Isabella Violet Smith (known as Chic). Violet’s family came from Dufftown, a small town in Moray, Scotland. Walter Felton was a direct descendant of Sgt Major Henry FELTON (1798-1876) who was one of the pioneer settlers of the Falklands. Walter Felton worked on farms at Estancia (Joan’s first home in Camp), at West Point and Roy Cove before becoming a policeman in Stanley for twenty-five years – rising to the rank of Inspector. 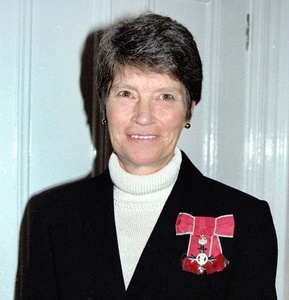 The Feltons had two children – Roy and Joan. Joan was educated by travelling teachers at West Point and at the farm school at Roy Cove, before completing her studies at Stanley Senior School. She began work as a pupil teacher (locally qualified) teaching at Darwin School (1962-1964), then the Stanley Infant and Junior school and a for a short time at Port Howard school, before moving into Stanley to work for the Falkland Islands Company in 1968.

In May 1971 Joan Spruce married Terry SPRUCE at the Cathedral: they have one son, Mark, born in 1979.

Joan Spruce has a life-long interest in local history and in the social history of the Falklands, and she has become one of the most knowledgeable local historians. She has been widely consulted by many scholars and fellow historians. 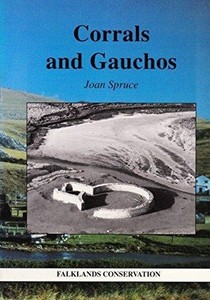 A museum has existed in the Falklands since the time of Governor ALLARDYCE, but sadly many of the exhibits were lost in the fire in the Old Town Hall in 1944.  The Colonial Secretary from 1963-1969, W H (Tommy) THOMPSON, began collecting material to form the basis of a new museum, and in the late 1970s, in collaboration with John Smith (the future Museum manager) and Shirley Hirtle, Joan Spruce helped to re-establish the museum - firstly in the old Gymnasium and subsequently at the FIC offices in Crozier Place.  When Britannia House became available in 1987 the museum was moved to this new site. The museum was formally opened in February 1989 by Sir Rex HUNT who was visiting the Islands at the time. (In 2014 the museum moved again to a much larger site at its current location in the historic dockyard development).

Joan Spruce became the unofficial archivist of the Falkland Islands Company. This was initially because of her husband’s employment by the Company, but also because of her own personal interest in this significant part of the Islands’ commercial history. As a clerk in the office she soon became aware of the need to sort and catalogue the vast amount of FIC archival material to secure and safeguard its future. Over a number of years, in the attic rooms above the FIC main building in Crozier Place, Joan Spruce meticulously indexed and organised the historic records of the FIC. During this time numerous researchers and historians consulted Joan, and she became an invaluable guide to this unique resource. Eventually Joan Spruce supervised the transfer of the FIC archives into the Jane Cameron National Archives in Stanley. Future generations of researchers will be very grateful for Joan’s passion for preserving the records of the Company whose history is inextricably bound up with the history of the Falkland Islands. 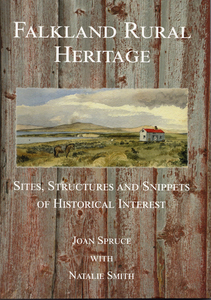 Joan Spruce is one the founding members of the Falkland Islands National Trust, and she was the driving force behind the restoration and re-fencing of the majority of the Camp cemeteries outside Stanley in the 1990s – work carried out for the National Trust. Although Joan has retired as a Trustee, she still enjoys working with the organisation, and is a volunteer at the Museum.

Joan Spruce has contributed to a number of publications and journals. She is the author of the booklet Corrals and Gauchos published by Falklands Conservation in 1992. In collaboration with Sally Blake, Joan Spruce has published a Dictionary of Falklands Vocabulary. Joan Spruce was a contributor to The Falkland Islands Cookbook and she is the author of seven biographies in the Dictionary of Falklands Biography. In collaboration with Natalie Smith, she published in 2018 a book called  Falklands Rural Heritage, which is concerned with the people, places and the built environment of the Falklands. 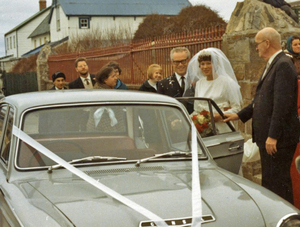 Joan and Terry Spruce on their...

Joan Spruce has played a major part in the recording and preserving the history of the Falkland Islands, and in so doing she has made an invaluable contribution to the ongoing life of the Islands, as well as supporting and encouraging many other people in their research and scholarship.

Tim Simpson; Cooking the Falkland Way; (information and  contribution to)  1994