naval officer, was born on 30 September 1820 at Upper Deal, Kent, the second son of Captain Edward Boys, RN, and Elizabeth Boys, née Sayer. He joined the Edinburgh as a midshipman in 1837, and during the war in the Levant he distinguished himself at the capture of Beirut in 1840 and later that year he was wounded at the bombardment of Acre. He next served as mate in the Vanguard and in 1846 as a lieutenant in the Snake. He then served successively in the Conway and Excellent, before being appointed in August 1851 to the Centaur as flag-lieutenant to Rear Admiral William Wilmott Henderson, who had been his captain in the Edinburgh and was then commander-in-chief SE Coast of America Station. In 14 May 1853 Boys was promoted to commander through a death vacancy and on 9 February 1854 he was appointed in command of the 6 gun brig Express. 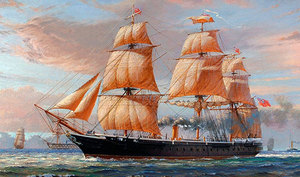 On 5 February 1854 Admiral Henderson had received a request from Governor RENNIE, dated 12 January, for help in preventing the American whaler Hudson and her tender Washington from poaching livestock on the Falkland Islands. At the same time WH SMYLEY, United States commercial agent in the Falklands, made a request to the American Commodore WD Slater, stationed in Montevideo, to defend American interests. On receipt of Rennie's request Henderson responded by ordering Boys to the Falklands on 11 February in the Express 'enclosing for his information and guidance copies of two letters from the Foreign Office relative to the conduct to be observed'. Slater meanwhile responded by sending the much larger sloop of war Germantown, Captain William Francis LYNCH, to Stanley.

Shortly after his arrival in the Islands Boys arrested the Washington and brought her and the Hudson into Stanley on 2 March, so that their American masters could be put on trial. This was seen by Lynch, who had arrived in Stanley earlier that day and he immediately engaged in a policy of bluster towards both Governor Rennie and Boys. The following morning Lynch, accompanied by Smyley, called on the Governor, having previously beat to quarters and shotted his guns. A heated interview ensued. Lynch next wrote to Boys demanding to know what right he had to put his men on board American vessels. Boys replied that he was acting on the governor's instructions. Next morning the governor and Boys paid a formal call on the US Captain and were received with a 21 gun salute, after which Lynch moved his ship to dominate the Express and the small shore battery. On 7 March, Hiram Clift, master of the Hudson, appeared in court. The day before Lynch had moved his ship opposite the courthouse and during the trial trained his guns on the building. In spite of this the magistrates refused to be intimidated and Clift was duly fined, the Hudson and Washington leaving for America a week later. Lynch remained in Stanley for a month, concentrating his anger on Boys, again demanding what right he had to set foot uninvited on the two American vessels. Boys's reply is not known. On 12 April Henderson received a letter, dated 16 March, from Rennie reporting on the steps taken by Boys and on the same day the Admiral received a letter from Boys, dated 17 March, detailing his proceedings and enclosing copies of correspondence between himself, Rennie and Lynch, 'drawing attention to the tone of the latter'. Boys's tact and firmness in the face of Lynch's bluster must have prevented an unpleasant incident becoming more serious. 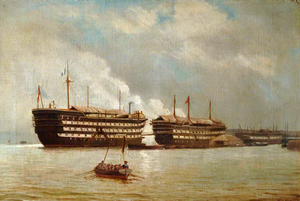 Boys's subsequent career was distinguished. He remained in command of the Express until 1856, when he returned home and married. He was promoted Captain on 17 October 1857. After commanding the Pelorus and Barrosa on the China station he took command of the 9,210 ton Warrior, the first sea-going ironclad, for her second commission in July 1867 (The Warrior has been preserved and is now a tourist attraction in Portsmouth Harbour). He was later appointed in command of the gunnery training ship Excellent, in which many future leaders of the navy served on his staff, including the legendary Jackie Fisher. In May 1874 he was appointed director of naval ordnance during a period of rapid technical development. He was promoted rear-admiral on 30 July 1875, vice-admiral on 1 April 1881 and full admiral on his retirement on 1 June 1885. He died at Blackheath on 16 March 1904. Boys was a fine seaman and one of the modernizers of the navy in its transition from sail to steam.