farm manager, was born in Doncaster, Yorks on 22 October 1930, the middle one of the seven children of Brook Hardcastle and Ethel, née Hinchcliffe. When he was eight his mother died and he was sent to Silcoates Boarding School in Wakefield where he remained until 1947. His father had a farm at Thixendale near York and Brook Hardcastle was the son who was to study agriculture and eventually take over the farm. Unfortunately his father died and the estate was sold, but he carried on at Riseholme Agricultural College and finished his HND. The family solicitor advised him to look abroad for a job which he did and was finally taken on by JL Waldron at Port Howard as a farm cadet. 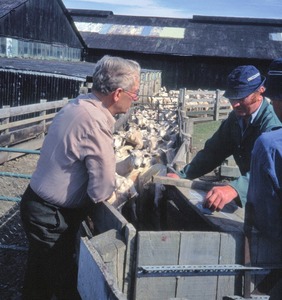 171 Drafting at Goose Green with Tony...

In December 1950 he left England on the Highland Princess and arrived in the Falkland Islands in January 1951, then on to Port Howard by Auster aircraft to start a new life under the watchful eye of Douglas POLE-EVANS who was the manager. At Port Howard he joined in the farm-life, learning to ride horses, shear sheep, erect fences, keep the farm books and take on any other job going - all the time enjoying the way of life in the Falklands. In 1956 Hardcastle married Eileen Aldridge, an Islander, and they went to the UK on holiday. While there he did courses in welding and the maintenance of farm machinery before returning to the Falklands to work as assistant manager at Port San Carlos.

After five years at PSC he decided to emigrate to New Zealand with his wife and children - Gavin (b1957), Janet (b1958) and Simon (b1961). Arriving in New Zealand in 1962 he found temporary work with the Department of Lands and Survey dividing up some of the larger farms into viable small holdings for returned servicemen. A year later he applied for the job as stock manager on a farm which was being set up as a training institute for boys of 17-20 years of age. After six months of preparation for students the first intake of eleven were enrolled. Numbers of students increased each year and when Hardcastle returned to the Falklands there were 84 boys attending. 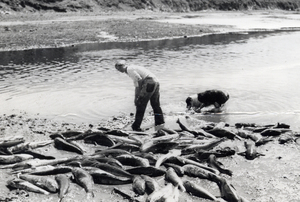 In 1971 he decided to return to the Islands when offered the post of farms general manager for the Falkland Islands Company, hoping that his New Zealand experience would be of benefit there. After an introductory Landrover trip around the farms on East and West with FIC director Bill (WW) BLAKE he finally arrived at Darwin in May of that year. Over the next 20 years he introduced various changes, which included contract shearing, centralising Goose Green milk cows, moving empty shepherd houses to the settlement for occupation and implementing Lord SHACKLETON's 1977 recommendation to divide up some of the larger farms for sale to local people. The first farm subdivided was Green Patch owned by the FIC.

In 1982 when the invasion by Argentina took place, he was one of the 115 residents held under arrest in the Goose Green Hall. After the Conflict there was much to be sorted out with animal stock disrupted, damage to machinery and fencing and the problem of minefields. 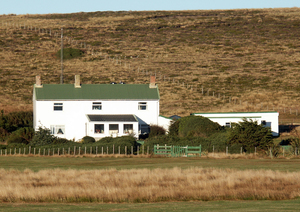 Hardcastle became the first farms manager of the FIC to assume overall responsibility for Company affairs in the colony, although his principal interests were centred on farming. He was an innovative manager, highly conscious of the need to improve grassland as a prerequisite to increasing sheep numbers. His ideas for improvement were carefully prepared and were supported by the Board of Directors, although not to the full extent that he would have wished, because of the prevailing vicissitudes of the wool market. His views on sheep farming were highly respected both in the colony and outside. He transformed the working conditions of Company employees by considerably reducing the isolation of outside shepherding, bringing houses into the settlement where he fostered much improved social conditions. It had always been traditional for FIC senior managers to be nominated members of Council and it must be regretted that he did not serve as a Councillor at any time, because of his very high standing within the community and the wise counsel which he would have brought to bear.

Hardcastle retired in 1991, having bought the oldest remaining house in Darwin - he was happy to live among the people he had worked with over the years. He enjoyed fishing, and was a supplier of fish to Stanley. Other hobbies included gardening, carving horn and, having a 'feel' for wool, he enjoyed spinning whilst listening to the radio. He led an active life until a month before he died in Stanley on 17 July 2003. 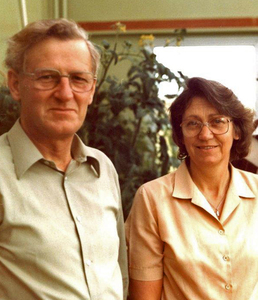