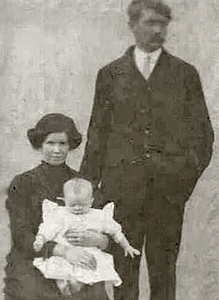 Jock McPhee's parents, with his...

On leaving school aged 12, McPhee began work at the West Store, delivering goods to the residents of Stanley by bicycle, but he soon became dissatisfied with this employment, and he moved to North Arm farm as a ‘house boy’ for the manager of North Arm farm – and thus began his life working on a sheep farm. At the age of 18, in December 1939, McPhee moved to work at Hill Cove – where his sister Florence was already employed as a maid in the house of the manager Hugh HARDING. 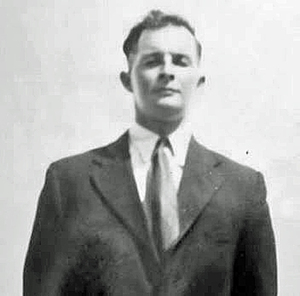 At the beginning of WWII, the decision was made that West Falkland should form a mounted section of the Falkland Islands Defence Force, and Jock McPhee was among those who first joined up. The West Yorkshire Regiment conducted training at Port Howard. After a spell of working on Saunders Island, McPhee moved back into Stanley to work with his father in his peat carting and haulage business.

June McPhee was the eldest of the four children of John and Ruth Sornsen. She grew up on Bleaker Island and later lived on Lively Island, and at the age of nine she moved to Stanley to live with her grandmother, in order to continue her education. At the age of 14 she returned to live on Lively Island to support her parents – working on the farm. At the age of 16 she was invited to become a pupil teacher, firstly working for the FIC on Bleaker Island and George Island and then as a government travelling teacher working at Green Patch, Port Louis, Long Island and Estancia. She quickly became a widely respected travelling Camp teacher. 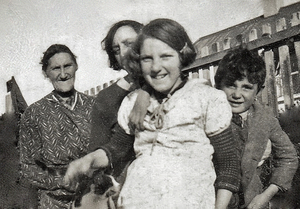 The newly married couple moved to Mount Pleasant House under the management of Jim Clement, the manager of Fitzroy farm. Their new home was an outside shepherd’s house – sometimes called a ‘track house’. Jock and June soon gained a reputation for hospitality and their home became a place for travellers to stop for a cup of tea or even for a bed for the night. McPhee became head shepherd and he established himself as a reliable, efficient, hardworking, knowledgeable and respected ‘Camp man’.

In 1958 the McPhee’s seriously contemplated moving to New Zealand where Jock’s sister Florence was now living with her husband Ronnie Barnes. McPhee resigned from his job, and their worldly goods were packed up and ready for shipping in a warehouse in Stanley. However, a few days before they were due to leave the Falklands, Jim Clement telephoned McPhee and offered him the job as manager of Green Patch farm. To be offered a manager’s position of a Falkland Islands Company farm was a testimony to the high regard with which McPhee was held, and in those days, it was a rare achievement for an Islander to be offered such a managerial post.

[The FIC] considered Jock good enough for the task and it says all we need to know about his capabilities. The lure of a high-profile position, a vastly improved salary, a Land Rover to run around in and a two and half yearly paid holiday in the United Kingdom and all the associated perks of being a manager brought was too tempting.

Green Patch farm had been the location of the Experimental/Model farm in the 1920s. The Model farm had been built as part of the improvement initiatives promoted by Governor MIDDLETON. His philosophy was based on the adage that 'seeing was believing' and thus the only way to improve the situation, and to educate farmers into accepting new farming methods, was a working example of good practice. The project was later abandoned as a result of Middleton’s successor as Governor, Arnold HODSON’s, antipathy towards the scheme, and ensuring that the experimental farm was closed down within a few months of his arrival in the Falkland Islands 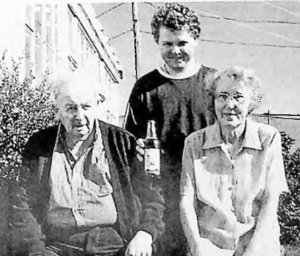 Jock and June McPhee, with their...

McPhee soon began to build up the Green Patch farm, and he became known for his strong management decisions, his fair leadership, as an expert stockman who was utterly reliable. In the late 1970s the big farms began to be broken up and sub-divided following the recommendations of Lord SHACKLETON’s report. McPhee was offered the managership of the large farm at Goose Green, but he declined the offer, preferring to purchase part of the Green Patch farm. Some people thought that McPhee was a little old to take on such a commitment, but he was to prove the doubters wrong.

During the conflict of 1982 more than 100 inhabitants of Stanley sought refuge in North Camp farms and the McPhee’s house at Green Patch soon became full of ‘wartime’ lodgers.

At the cessation of hostilities in June 1982, the McPhees moved to their new farm that they had purchased – now called Brookfield farm. June McPhee was very reluctant to move out of her house at Green Patch - thus with the help of many friends and neighbours, the house was partially dismantled and then towed on rollers by tractor from Green Patch to its current location at Brookfield. The Brookfield farm settlement was built very close to the site of the abandoned Model farm settlement. 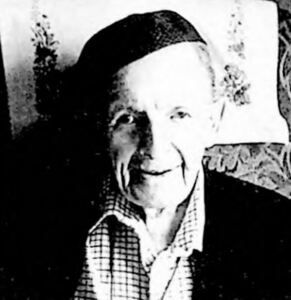 An expert stockman in retirement

When the McPhee family took over the 4,039-hectare farm there was nothing at the present settlement apart from a single chimney – a remnant from the model farm: there was no water source.  And so, in 1981 the term ‘moving house’ was used literally, as a bungalow was cut into sections and transported to the farm. The operation was so successful that in 1986 it was repeated with a two-storey house.The porches were removed from the house that was built for Jock and June at Green Patch and the main part was jacked up, and with the help of fellow farmers and friends, it was transported to Brookfield on large purpose-built sleds. Amazingly a bottle of Task Force Ale was sitting on the kitchen table when the house left Green Patch and it was still in the same position on arrival at Brookfield.

Jock thoroughly enjoyed the challenge of owning and running his own farm and his policy of not overstocking paid dividends as the quality of the wool improved greatly.

The hospitality of Brookfield farm became the stuff of legend. A member of the family commented that in a three-year period their visitor’s book had more than 600 signatures.

Jock McPhee had a wry sense of humour that was quick to see the funny side of life. On one occasion the chimney of their house at Brookfield was damaged during a winter storm. The McPhee’s decided that it was too cold to get out of bed to investigate, but in the morning, they discovered that the peat fuelled Rayburn stove had gone out during the night. Jock made light of the fact that his false teeth that had been placed in a glass of water by his bedside were now frozen solid in a lump of ice.

June McPhee had a strong and feisty personality, and she loved a good argument. She was also kind and immensely hospitable. Those who knew her well testify to her ‘genuine caring nature and that she gained a great deal of personal satisfaction from helping others whenever she could’.

In 2010 as Jock and June’s health began to deteriorate, they moved into Stanley to a small flat in St Mary’s Walk – but their capacity for hospitality never wavered. To the very end of Jock McPhee’s life ‘he was as sharp as a razor right up until the time of his passing at the age of 92.’

June McPhee died on 18 March 2013. Jock McPhee died on 28 October 2013 and is buried in Stanley cemetery. The ashes of his sister Florence, who died in New Zealand, are buried in the same grave.

Editorial note: The quotations in this biography come from Patrick Watt's tribute that was first published in the Penguin News in 2013. Use of this text is grateful acknowledged.