German traveller and photographer, was born in Gornitz, Prussia {near Poznan in Poland} around 1849.

In early 1875 he married an English girl, Sarah Smith, and began to live in Brighton (Sussex) where he ran The Anglo German [photographic] Studio, specialising in portraits and views of notable buildings. 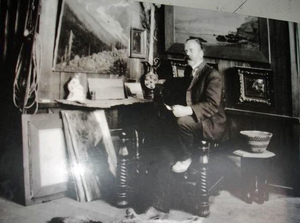 Around 1877, he began several long journeys which led him to South Africa, South America including Tierra del Fuego, where he investigated mineral resources, and further on to Patagonia. Then he moved to the Falkland Islands, which were seldom visited at that time. During all his voyages he took wonderful photographs, which he published in several editions in Leipzig (Germany) and in London.

From his photographic albums we can partly reconstruct his last journey, which took place about 1887. From Hamburg, Schulz boarded a ship from the German Steam Navigation Company Kosmos to travel to the Falkland Islands. In South America they stopped at Buenos Aires, passed the Strait of Magellan with the destination Valparaiso and then back to Stanley. This voyage is documented in an album of 21 photo engravings. 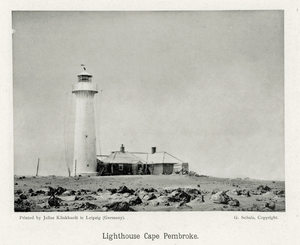 Photograph by Schulz of Cape Pembroke...

Schulz stayed on the Falkland Islands for a year and travelled around with local boats.

When he finally came back to Europe he published a general account of his visit of 20 to 22 pages, adding 18 or 20 photographs according to the edition, which showed wild life, a stone run, some buildings, the centre of Stanley and two other settlements, as well as the landscape. In his text he focussed on historical, geographical, climatic, geological, biological, and economical description including external and internal communications and government, with figures for population and trade. Then Schulz gave some information about Port Stanley: besides three schools, two good hotels and various shops, a local rifle club, a social club, a mutual benefit club and a small library provided necessary amusement for the population.

He also described walks near Stanley and his visits to Darwin and Goose Green, as well as to Port Louis on Berkeley Sound. Agriculture (tillage) was almost non-existent, in contrast to sheep farming, which was very successful. Altogether the landscape of the Falkland Islands made a wild and inhospitable impression on Schulz. Nevertheless he stayed during 1887, looked around with open eyes and took pictures of the most impressive sites and did some portraits (one of FE COBB survives). 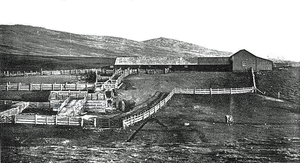 Schulz's photograph of the woolshed...

During the early 1890s Schulz prepared a photographic record of perfume factories in America and Europe on behalf of a professor of botany, Friedrich August Flückiger: this was published by Gröber of Leipzig in 1893. His family, but not Schulz himself, feature in the 1891 and 1901 censuses in Brighton. His wife Sarah is shown as head of the family with six children. 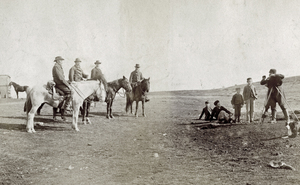 Around 1901, Schulz left his family in Brighton and moved to the coast of Southern California. He set himself up as a photographer at La Jolla a resort near San Diego where he turned a natural sea-cave into a popular tourist attraction known as the ‘Sunny Jim Cave’.