French gaucho and foreman, first appears in the VERNET financial accounts as a gaucho paid for guarding Vernet's horses near Río Negro in November 1825. Simon is first mentioned actually in the Falklands in May 1829, just as a gaucho. There are several further references to him in 1830 doing ordinary jobs, once in company with Antonio RIVERO. At some stage Simon became capataz, or foreman of the gauchos, and he came to prominence in 1832 during the Lexington raid when he opposed the departure of Henry Metcalf, Vernet's deputy, as this left no one who could read or write in the settlement. He also objected to Metcalf taking with him what Simon considered to be Vernet's property. After all the European settlers had departed on the Lexington in January 1832, Simon was effectively the leader of the fourteen or so gauchos that stayed behind. They lived in fear of foreign vessels whose captains slaughtered both tame and wild animals. More welcome were vessels with supplies for Vernet, but Simon turned some of these away as he was not authorised to receive the goods. 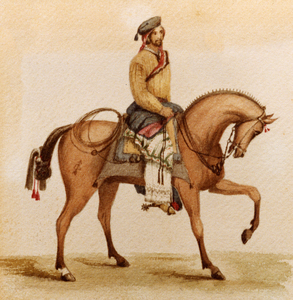 Everything changed when the schooner Sarandi arrived on 6 October 1832, bringing Metcalf and, more importantly, Etienne MESTIVIER, a French army officer, as provisional political and military commander. Simon clearly resented the loss of his position as leader. When Mestivier was brutally murdered in a mutiny on 30 November, Simon was prominent among those who restored order. Helped by crew from the French whaling vessel Jean Jacques, Captain Guerin, Simon surprised the mutineers near Estancia. They were taken onboard the British schooner Rapid on 8 December 1832 and placed in irons. Then the Sarandi returned on the night of 29 December, and its commander Jose Maria Pinedo took charge. But HMS Clio arrived on 2 January 1833 and Captain ONSLOW told the Sarandi to leave. On 3 January Pinedo told Simon he was to be political and military commander and should keep the Argentine flag flying, so that for some the illiterate Simon can be listed, however implausibly, as one of the Argentine 'governors' of the Falklands. He never attempted to act as such, and the Argentine flag was replaced by the Union Jack that same day.

Onslow reported the difficulty he had in persuading 12 of the gauchos to stay. They pleaded to be paid in silver - not in Vernet's paper currency and Onslow told Simon to do this. In March 1833, Vernet sent the Rapid back to the settlement with BRISBANE and Pasos on board. Simon was accused of defrauding Vernet and had a letter of rebuttal prepared. But authority had been hopelessly undermined and on 26 August, Simon, Brisbane, and three others were murdered by Vernet's Churrua Indians and rebel gauchos, led by Antonio Rivero. Vernet did not hear of these deaths until much later and did not even know where to find Simon's next of kin. Posthumously, he accepted that Simon had not defrauded him.

But Simon may have had kin of a sort, and left a legacy of sorts too. A report of 18 September 1839, on the inhabitants of Port Louis by Lieutenant LOWCAY, mentions Mrs Gregoria Parry, wife of Henry Parry, master of the schooner Alonso: she had two sons - 'son 1 of union with capataz that was murdered'. While that must refer to Jean Simon, actually the mother of Simon’s child was Carmelita, who later married an English sailor Richard Penny and committed suicide in Stanley Harbour after Parry’s death in 1845.