mariner and farmer, was born in the town of Horsens, on the east coast of Denmark, on 19 February 1887, the son of Jens Andreasen, a merchant. He decided on a sea-going career and began working on fishing boats in the Baltic, but soon ventured further afield, gaining experience on both sailing ships and steamers crossing the North Atlantic. In Halifax, Nova Scotia, he joined a sealing schooner, the Agnes G Donahoe, a 100-ton vessel with a crew of 20, about to leave for the South Atlantic. The ship arrived in Stanley at the beginning of February 1907, carrying 1,382 sealskins and having just lost the mainsail in a storm. Three other sealing schooners were already in harbour and two of them had several cases of beri-beri, the vitamin deficiency disease, among their crews. A single 'slight case' was reported by the Church Magazine on the Agnes G Donahoe. This was Andreasen, who was subsequently diagnosed as being too ill to continue on the voyage and had to remain in Stanley when the ship sailed. 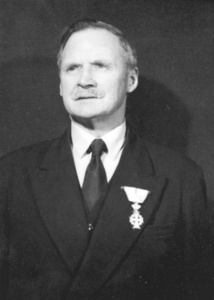 9 With the Order of the Dannebrog.

After a convalescence of several months, he was employed by the FIC on their newly-built schooner, the Malvina. She had been equipped with an engine, so Andreasen, with his experience of both sail and steam, was perfectly qualified to work on her. The FIC colonial manager, WA HARDING wrote to the directors in London 'Andreasen came from one of the Canadian sealing schooners ... there is no other man here who could be trusted to have anything whatever to do with the engine'. In 1910 the Malvina was wrecked in Reef Channel and Andreasen was then engaged to work at Port San Carlos, where he remained for the next thirty-seven years, first as foreman and later as manager. Shortly after beginning work at Port San Carlos, he married Emily Andersen at the Tabernacle in Stanley. She was the daughter of James Andersen, also a Danish mariner, who had arrived in the Falklands as a young man fifty years earlier and married Mary Riley, whose father was one of the military PENSIONERS. The Andreasens had three children, Christian Emilie (b1911) Mary Clarissa Elizabeth (b1913) and Sturdee Valdemar Jens (b1915).

In World War I, Chris Andreasen played a key role in the defence of the Falklands. He had joined the FIVF in 1908 and been called out with the rest of the force on the outbreak of hostilities in August 1914. On the morning of 8 December, when the newly-arrived British squadron under Admiral STURDEE was coaling in Stanley Harbour, Andreasen was on look out duty on Sapper Hill. From here, he was the first to observe and report the approach of the German squadron. His maritime experience enabled him to give Admiral Sturdee accurate and detailed information over a telephone line on the type, distance, speed and bearing of the approaching ships, so that in spite of having to prepare for battle in haste, Sturdee had a clear picture of the opposition. This was one of the critical factors in the ensuing British victory in the Battle of the Falkland Islands. Sturdee was so impressed by the quality of the intelligence he had received that on his return to Stanley after the battle, he asked that Private Andreasen visit the flagship, HMS Invincible, so that the Admiral could thank him personally for his contribution. A special parade was ordered by Governor ALLARDYCE, at which Andreasen was officially and publicly commended. He was subsequently awarded a gold watch by the Lords Commissioners of the Admiralty, for services to the Royal Navy. He had also been given a Bank of England five-pound note as a personal gift from Admiral Sturdee, who had signed it, and until the end of his life he proudly kept this in a frame with other memorabilia of the Battle of the Falklands.

The Danish Order of the Dannebrog...

His career in farming was equally successful and he was twice manager of Port San Carlos for extended periods, the first time in the 1920s and the second time in the 1940s. He continued to serve in the Defence Force and was given a commission in World War II, when he organised coast-watching and assisted with the formation of the Mounted Rifles. In 1947 he retired to Stanley, where he lived with his wife in Jubilee Villas on Ross Road. He returned to visit Denmark twice and on the second occasion, in 1958, the King of Denmark conferred on him a Knighthood of the Order of the Dannebrog. This was in recognition of the credit Andreasen had brought to his native country by his distinguished services abroad. He was immensely patriotic and flew the Danish flag outside his house in Stanley, often entertaining the crews from the Danish charter boats which called at regular intervals. A placid person, he was a familiar figure in Stanley in his old age, smoking his pipe or out walking with his cane, raising his hat to people with old-fashioned courtesy.

Andreasen died in Stanley on 30 August 1962. In an obituary in the Falkland Islands Monthly Review, Norman CAMERON wrote:

Chris.Andreasen was one of that rare breed of seamen to whom the Colony and the sheep farms owe a lasting debt. Let us acknowledge it here. Their calling was the sea, but finding themselves through the accidents or hazards of a seafarer's life ashore in these islands, they turned their backs on the sea and gave their skills and their energies to the service of the farms, taking sheep and sheep work in their stride. But sails gave way to steam, the Panama Canal stole the traffic from Cape Horn, and these tough, invaluable men came to us no longer. Stranded on a foreign shore, a stranger in a strange land, to acquire the difficult language, to engage in the industry of the country, to rise to the top in that industry and in so doing to make yourself one with the people, these are not simple achievements. They must have demanded a full measure of understanding and goodwill, courage and determination, with all of which Chris was abundantly endowed.

These words summarised both the regard in which Andreasen was held by the community and the way in which he exemplified the major contribution made to the Islands over the years by the many sailors, particularly of Scandinavian origin, who, by 'accident or hazard' found themselves on Falklands shores. Emily Andreasen died in 1978 and she and her husband are buried in Stanley cemetery. Chris Andreasen's grave, with his country's flag painted on the stone, is still sought out by visiting Danish mariners to whom his name has become something of a legend.