farmer and naturalist, was born on 17 December 1854 in Stanley, the tenth child of Henry FELTON and his wife Martha, née Staples.

Several of Henry Felton's sons took to farming, either in the Falklands, or in Patagonia, where more land was readily available, or in Australia. Arthur Felton probably gained his farming knowledge in Camp on his brother-in-law William Wickham BERTRAND's land at Roy Cove. 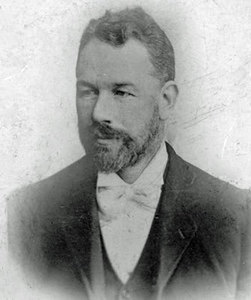 West Point Island was included in the leased Roy Cove farm, and was uninhabited except for plentiful wildlife, the wildest of all being the cattle placed ashore by seal and penguin hunters for fresh meat supplies. It was a favoured anchorage for roving ship's crews who had free access to fresh water and even grew potatoes.

Felton took over the lease of West Point Island in 1879 when he was in his mid twenties, living in a tiny stone hut probably built by sealers. He did not have money to spare and considered building a woolshed to be his priority. When the woolshed foundations were being built, several bodies were discovered, having being roughly buried several years before, presumably sailors who had died of scurvy or some other 'cause'. They were re-buried elsewhere. 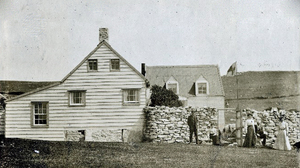 Felton busied himself building the structures and amenities necessary for his sheep farm. A programme of basic fencing was begun, a well dug, and gardens started, to provide much needed fresh produce. Cows would have been tamed from the wild herd to provide milk and butter, and sheep brought from the mainland in small boats. This was all hard work and probably a very lonely lifestyle.

In January 1882, Commander William WISEMAN wrote graphically to his wife about a hunt for wild cattle on West Point with Arthur Felton and his brother George (who was his business partner at the time). Until the wild cattle were killed off, building fences would have been a waste of time, as the cattle would have trampled them down. The cattle were also ruining the remaining tussac (Poa flabellata) fringes round the north of the Island. 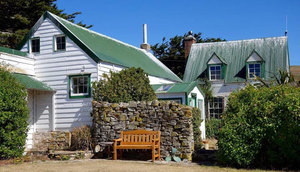 Felton must have had some respite from his labours to court (Elizabeth) Lily Whaits, whose father was catechist and joiner for the Patagonian Mission Station on nearby Keppel Island. Lily was living at the Mission Station at Ushuaia before her marriage to Arthur, and would have suffered a winter sea voyage to Stanley for the wedding which was held in Holy Trinity Church on 31 July 1884.

He had a great interest in natural history, farming and agriculture. His energy and insight into improving the pasture of West Point was to pay dividends. Not only did he labour hard to plant thousands of small tussac plants in various locations on the Island, he top sowed several more palatable grasses which grew well, replacing White Grass (Cortaderia pilosa) and most of the Diddle Dee (Empetrum rubrum). This ensured very good grade wool which brought Felton high prices. The large gardens on West Point produced a flourishing variety of hardy fruits and berries, vegetables, shrubs, trees and flowers. 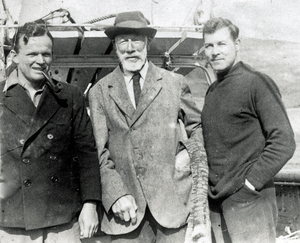 Arthur Felton (centre) with W A...

A self-sufficient and thriving farm was established, with the Felton family, increased by this time by the birth of a daughter Alice Emma in 1886. An additional family would be in residence, employed to help with a variety of farm work.

Felton was viewed with some derision initially because of his insistence on the importance of tussock as a winter feed for animals, and on the good management of vegetation for sheep grazing. He was passionate about the care and management of local wildlife, especially after the imported cats on West Point exterminated the few rabbits there and many of the small birds. Many naturalists visited the Feltons on West Point, among them the Swedish scientist Carl SKOTTSBERG who wrote: 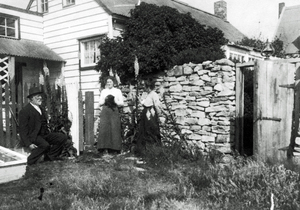 Mr Felton approximates very nearly to my ideal man. Ready to enjoy life and civilization when there is a chance, he nevertheless lives in complete harmony with the wild camp life; he is interested in his work, he tries all sorts of grasses for his sheep, but is also - an exception to the general rule - intensely fond of nature itself and is gifted with such and gifted to such a remarkable capacity for observation that many a naturalist by profession has reason to envy him. He knows every beast or plant on his island; he loves and nurses them, quite convinced that the human race can live at its ease without depriving living things which do him no harm of any chance of existence. I have never met anybody but him who tries to save one of the Falklands' finest adornments, the giant tussock grass which is nearly extinct whenever there are sheep, much to the detriment of the coast's appearance.

ER GUNTHER visiting on the Discovery Expedition in the 1920s, describes how Felton, having been reading late into the night, woke him by tickling his nose with a piece of paper, the former being highly amused by the prank. They drank coffee at dawn, and then Felton sent his guest off to the mollymawk rookery to collect eggs for breakfast. 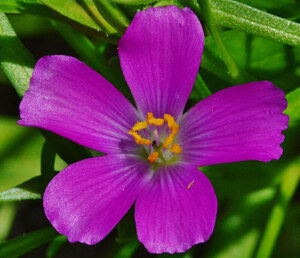 Governor ALLARDYCE writing to the Colonial Office in 1909 called Felton one of the most successful and progressive sheep farmers of the Colony, although he had only 2,500 sheep. With extensive tussock paddocks wherever the plants would flourish, he had judiciously fenced off the land into small sections and his sheep had clipped a heavier than average fleece than any farmer in the Falkland Islands. He was appointed a Justice of the Peace in 1904.

In 1910 Carl Skottsberg was sent a specimen of a plant which Felton had found in 1895 and 1898 at the end of a stone run on the Island. He had brought home some seeds which had been planted in the garden and then accidentally covered with clay. This had been removed some years later and the seeds had then germinated. The flower, which Skottsberg described as Calandrinia feltonii was an annual with only one close relation, Calandrini axilliflora which grew in Chile. The 'Felton Flower' as it has become known, had petals varying from white through to a bright, shiny cerise colour. Unfortunately sheep have eaten the original plants out on West Point, but over the years they have thrived well in many private gardens and trial plantings have been made in and around stone runs. The flowers have also featured on Falkland postage stamps, keeping Arthur Felton's name alive.

In 1932 Felton left West Point and his final months were spent in his 'Sunny Bungalow', which he had built in Stanley only a few months before.

Arthur Felton died in 1933 and was buried in Stanley.

The lease of West Point passed to his daughter Alice. In the Falkland Islands Magazine and Church Paper of July 1933, a lengthy obituary noted:

Botany, Natural History, Meteorology, Geology - all were within his scope of knowledge and he could not only talk profoundly on these subjects to the casual listener but demonstrated his thoroughness in them by association with the learned men in these spheres of science. In 1912 he was elected a member of the Arts and Crafts Society in London and a fellow of the Royal Meteorological Society.

The obituary admired his generosity, sense of humour and fund of unlimited anecdotes and his 'loathing for animosities, backbiting and scandal - the petty smacks that are apt to form too large a part of the conversation of people in small communities'. 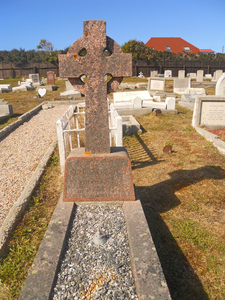 Editorial comment:  Arthur Felton's wife, Lily, died in Valparaiso (date unknown). Alice Felton ran the farm on West Point island  after her father's death in 1933. Some time after 1937 she moved to the UK and stayed with her family. There is correspondence in the Falklands suggesting that she was still receiving mail from Mrs Dorothy Barton (wife of A G BARTON) as late as 1969. The date of her death is currently unknown.

Thanks, that was very interesting!