naval officer, 9th baronet, came from a line of naval officers, confusingly all baronets, all admirals and all called William Wiseman.  He was educated in Switzerland and joined the navy in 1859.  He was soon in action on the Australian Station, serving under his father who was commander-in-chief.  The Maori War broke out in 1864, and both father and son distinguished themselves at their own levels.  Wiseman senior gained much credit and a knighthood for his resolute support of the army which had been pinned down by resourceful and determined opponents.  Midshipman Wiseman was part of a naval brigade, fought bravely, and was slightly wounded.  He was promoted to lieutenant and awarded the New Zealand medal. 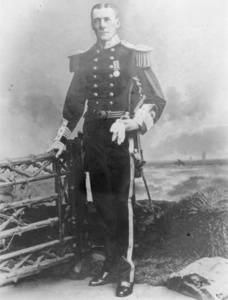 In 1881, now a commander, he was appointed in command of HMS Dwarf, a composite gun vessel of 160 feet length overall and four guns, commissioned for the South East America Station.  With a complement of 85 officers and men Wiseman set off from Montevideo on 10 December 1881 to proceed to the Falkland Islands, where unscrupulous sealing ships, mostly American, had for some time been decimating the seal population.  Governor KERR was in the process of passing a law to set up a conservation regime, and had requested a warship to stop poaching and enforce the new law.  Dwarf arrived in Stanley on 23 December 1881, and Wiseman called on the Governor, who at once asked him for his Paymaster's assistance in going through the public accounts; the treasurer, JW COLLINS, was suspected of misappropriation, which indeed soon proved to be the case.  Wiseman then proceeded on a leisurely cruise around the Falklands, calling in at most settlements and meeting and describing many characters found elsewhere in this Dictionary, including Ernest HOLMESTED, FE COBB, Captain Robert PACKE, the DEAN family, Arthur FELTON, Captain Charles HANSEN, JF HUNZIKER, and Bishop STIRLING. The cruise was successful in that the conservation law was established and enforced, with several sealers being warned off, and in addition there seems to have been plenty of time for parties, fishing, and above all shooting.

Wiseman's affectionate letters home to his wife during this period (published in 1995 as The Falklands and the Dwarf) are a delight. They offer a fascinating insight into the Islands of that era, poised as they were between the early pioneering days and the steady prosperity, based on wool, that led up to the stirring events of World War I. Wiseman was observant, perceptive, witty, and mildly eccentric, and through his pen the place and its people become alive. 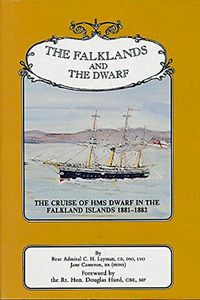 HMS Dwarf and the Falklands

Wiseman was promoted to captain after his Falklands cruise, and returned to England.  His subsequent career looked promising:  he commanded a battleship, and seemed destined for flag rank.  However he was struck by pneumonia while sitting on a court-martial of Vice-Admiral Fairfax, who had been partly responsible for the loss of HMS Howe off Ferrol (Spain).  He should have reported sick, but this would have required the whole proceedings to have been started again, and he held on too long. He died on 11 January 1893.

Kit Layman and Jane Cameron; The Falklands and the Dwarf; Picton Books; 1995