Swiss missionary, was probably born in November 1836 at Oberkulm in the Swiss Canton of Aargau.

He was trained by the Pilgrim Mission at St Chrischona near Basle. He left Southampton for Montevideo on 9 March 1860 to work for the South American Mission Society (SAMS).

Leaving Montevideo on 17 June, he arrived at Stanley on 29 June; finally he reached Keppel Island on 29 July. A year later he and Theophilus Fredric Schmid started work in Patagonia, arriving at Punta Arenas on 9 June 1861. They worked at first among the Indians near the Strait of Magellan, later wandering about Patagonia with them. At the end of May 1862 they settled in Santa Cruz. The mission was not a success: Schmid went mad and there were problems with the Indians and liquor. When the Rev Waite STIRLING met him at the beginning of 1863, Hunziker was not in good health. He transferred to Carmen de Patagones in the first quarter of 1864. 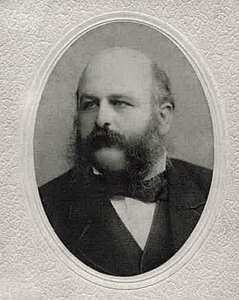 Hunziker married Martha Ellen Felton (eldest daughter of Henry FELTON) in Stanley on 21 July 1864, and they returned to Carmen de Patagones on 8 August.

Back in Stanley, they had a son, James, in November 1866 who died at 13 days old. They returned to Keppel Island, where James is buried.

During 1867 Hunziker left the employ of SAMS and probably worked at first at the Albemarle Dairy before moving to Port Stephens as a cowman for GM DEAN, subsequently becoming the flockmaster and then the first farm manager. 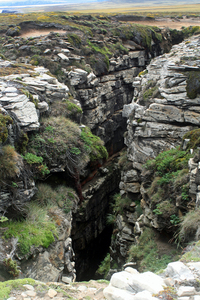 Sometime afterwards he married for the second time, Madeline (youngest daughter of Henry Felton) and they had a daughter, Nellie, in 1884. Another daughter Ada was born in 1885 and a son, Walter John in 1886.

'Seemingly a good fellow', noted Captain WISEMAN who called by in 1882, although the tradition at Port Stephens is that he was better at managing his flock of Indian converts than he was at herding the Falklands sheep. 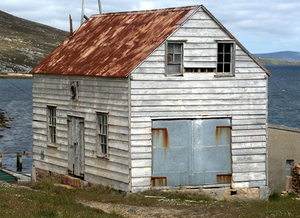 He is remembered at Port Stephens by 'Hunziker's Leap' a chasm running back from the sea about 200 feet deep. Hunziker once jumped over this on horseback while chasing colts, though only at a point where it is about five foot wide.