governor, was born in New South Wales, Australia, on 9 February 1880, the third son of Sir John Henniker Heaton, the imperial postal reformer, and his wife Rose, née Bennett. He was educated at Eton and New College, Oxford, where he read history and was a keen oarsman. On leaving university he joined the Colonial Service and his first posting was as a cadet to Fiji in 1902. In 1909 he married Phoebe Talbot-Crosbie of Ardfert, Co Kerry and in 1913 he was appointed assistant colonial secretary of Mauritius. This was followed by promotion to colonial secretary of The Gambia in 1918 and in 1921 he was appointed colonial secretary of the Falkland Islands. 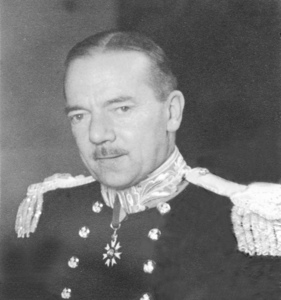 Accompanied by his wife and three children, Patrick (b1910) Rose Anne (b1914) and Priscilla (b1916) he arrived in the Falklands on the liner Orcoma on 12 September 1921. Sadly his wife died less than a year later, giving birth to their fourth child, Dermot. A Celtic cross with a Latin inscription marks her grave in Stanley cemetery. The children were looked after by their nurse, Miss Fraser, and the older ones invited to stay by kind friends in Camp, notably the Millers at Hill Cove and the Feltons at West Point, until they could be returned to the care of relatives in Britain. Their father remained in post, serving as acting governor for almost a year from June 1923 until May 1924. During that time, the question of an official crest for the Falklands was raised. The Islands' old 'badge' depicting a bullock and a sailing ship was still in use, but no proper Coat of Arms had ever been officially granted. Some ideas for different designs had already been considered when the Irish yachtsman, Conor O'BRIEN arrived in the Islands in 1924 in his yacht Saoirse with a beautifully painted insignia on the stern. Henniker Heaton enquired who the artist was and when he discovered it was O'Brien himself, asked if he would design a new crest for the Falklands. O'Brien produced a drawing of a shield with a sea-lion and ship, which after approval by councillors, the College of Arms and the British government, was officially adopted in 1925. It remained in use until after World War II, but was found too difficult to reproduce properly and in 1948 the current crest showing a sheep over a representation of the ship Desire was introduced. The 1925 crest however, was retained by the FIDF and is still used by them today.

In 1925 Henniker Heaton was appointed Colonial Secretary of Bermuda. On his departure from the Falklands the Church Magazine reported:

A great number of people will regret his leaving. As Colonial Secretary he was always accessible and willing to give whatever assistance lay in his power. During the time that he was acting Governor, Mr. Heaton proved a conspicuous success and richly deserved the high praise which His Excellency the Governor [Sir John MIDDLETON] bestowed upon him at the first meeting of the Legislative Council after his return from leave. 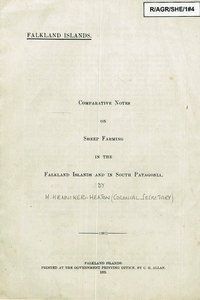 The report went on to say: 'Mr. Heaton was also a liberal patron of sport. The prizes he gave to the Race Meetings on the West and in Stanley were valuable and valued. In addition, Mr. Heaton was an active member of the Stanley Sports Association'. 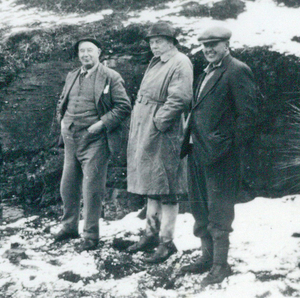 In 1926 Henniker Heaton married Helena Iris McCallum, who tragically died the following year giving birth to their son, Christopher. Henniker Heaton continued to serve in Bermuda and in 1928 was awarded the CMG. In 1929, having been voted a special grant by the Colonial Parliament in Bermuda for 'signal services rendered to the Colony, ' he moved to Cyprus, where he spent five years as colonial secretary. In 1934 he was once more appointed to the Falkland Islands, this time as governor. He arrived in Stanley on the liner Reina del Pacifico on 10 February 1935, accompanied by his two daughters, and assumed office the same day. He started his opening address with the words: 'The aim and purpose of Government is the happiness of the governed and with your assistance I shall endeavour to do my best to contribute towards that end'.

Henniker Heaton's term of office in the Falklands came at a time when the Islands were experiencing the economic Depression of the 1930s. In order to reinvigorate farming in the Falklands, he proposed a radical plan: to subdivide all farms larger than 24,000 acres and make land available, primarily to native Falkland Islanders, but also to European refugees, of whom, due to the rise of Nazism, there were increasing numbers. His policy was supported by the government's agricultural adviser, DS Weir, who considered that 'the cutting up of the land will automatically deal with matters which are now being tackled piece-meal and with little hope of success'. The agronomist, William DAVIES, also advocated subdivision. However bearing in mind Governor GOLDSWORTHY's failed attempt to widen land ownership in the Islands forty years earlier, Henniker Heaton wrote to the Colonial Office that 'there is no doubt that attempts at subdivision now will be met with deep resentment and hostility'. Perhaps as a result of this advice, London did not support his proposals and although Henniker Heaton's successor, CARDINALL, also promoted the plan, the subject was effectively to lie dormant for a further forty years, until revived by Lord SHACKLETON.

In 1937 Henniker Heaton was promoted to KCMG in the first honours list of King George VI. The Penguin commented that the award 'may be regarded as a compliment to the Colony as the title has hitherto been strictly limited as a Colonial Service honour to Governors of larger Colonies' . In the same year, while on leave in Britain, he formally handed over to the Sea Scouts, represented by HRH the Duke of Kent, the RRS Discovery, Captain Scott's old ship, which had latterly been used for the Southern Ocean scientific programme Discovery Investigations,

This was the second time Henniker Heaton had become involved in an effort to preserve an historic ship. In 1936 when proposals were made to beach or sink the hulk of the Great Britain, then moored in Stanley Harbour, the Penguin carried the following report:

The 25th of May next will be the fiftieth anniversary of the arrival of the 'Great Britain' at Port William on the completion in 1886 of her last voyage after 40 years of battling with the oceans of the world. It appeared to the Governor that if at all possible this famous vessel which has lain for half a century in our waters should be preserved and something of the appearance of her great days restored. His Excellency is accordingly seeking the advice of those best qualified to judge on the practicability of saving and renovating her. It is estimated that not less than £5,000 will be required and His Excellency has written tentatively to the Lord Mayor of Bristol enquiring whether he would open a subscription list in the United Kingdom when a public appeal is made in the press.

George ROBERTS, the colonial engineer, was asked for an assessment and a few weeks later the Penguin reported:

With reference to the notice published ... regarding the proposed restoration of the 'Great Britain', we have to announce that on full examination it has been ascertained to the Governor's great regret that that it would cost over £10,000 to preserve the vessel without re-masting her and that under the circumstances it is not possible to proceed with the project. 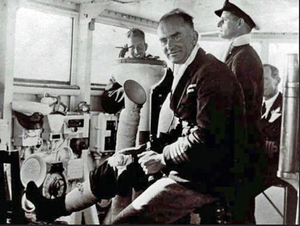 However it was ensured that she would be beached in Sparrow Cove, rather than sunk, which allowed for her recovery and restoration some thirty years later.

In 1939 Henniker Heaton had just tendered his resignation to the Colonial Office, effective from his 60th birthday in February 1940, when World War II broke out. He immediately withdrew his resignation for the duration of hostilities and became occupied with the task of establishing the Islands on a war footing. The FIDF were called out and coast-watching units set up at strategic points. After the Battle of the River Plate in December 1939, the resources of Stanley were fully stretched when HMS Exeter, Ajax, Achilles and Cumberland returned to the Islands and the wounded were brought to the King Edward VII Memorial Hospital. Exeter was so badly damaged that even her able-bodied ship's company had to be billeted ashore while the ship underwent repair. When Exeter left the Islands a month later, Captain BELL wrote to assure the governor 'that the officers and men of 'EXETER' will long cherish their thoughts of the Falkland Islands and all the memories that go with them'.

Henniker Heaton himself left the Falklands almost exactly a year later, on 28 January 1941, after seeing his younger daughter, Priscilla, married in Stanley Cathedral in October 1940. His colonial secretary, Allan Wolsey CARDINALL, who was to follow him as governor, sent a farewell message: 'The people of the Falkland Islands and myself wish you all happiness in your well-earned retirement. We cannot forget the care and love you have shown us in the past and the interest you took in all that made for our welfare'. 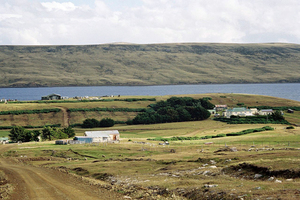 Although now officially retired, Henniker Heaton went directly to Bermuda, where he had been asked to act as colonial secretary for the duration of the war. His elder daughter, Anne, returned to Britain to volunteer for war service and in 1945 married Norman Keith CAMERON of Port San Carlos.

Henniker Heaton finally retired in 1945 and in 1947 married Gladys Going, widow of Colonel George Going and daughter of Colonel Claud Francis. He died in Hove, Sussex on 24 January 1961.

Henniker Heaton was trained in the formal traditions of the British Colonial Service and in his role as governor he is remembered as having been thoughtful, judicious and occasionally somewhat imperious in manner. However he was also a kind, affectionate, enthusiastic and sociable man, who, wherever he was in the world throughout his career, never lost sight of his principal aim, to promote 'the happiness of the governed'.

Henniker-Heaton; Comparative Notes on Sheep Farming in the Falkland Islands and in South Patagonia by H Henniker Heaton - 1923.pdf